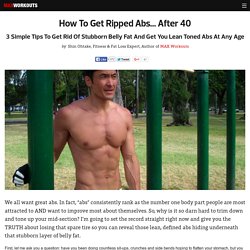 In fact, “abs” consistently rank as the number one body part people are most attracted to AND want to improve most about themselves. So, why is it so darn hard to trim down and tone up your mid-section? I’m going to set the record straight right now and give you the TRUTH about losing that spare tire so you can reveal those lean, defined abs hiding underneath that stubborn layer of belly fat. First, let me ask you a question: have you been doing countless sit-ups, crunches and side bends hoping to flatten your stomach, but you haven’t noticed a bit of difference whatsoever? Heck, maybe you’ve even resorted to trying out those “As Seen on TV” ab gadgets you saw on late night informercials, just to see if anything would make a difference.

No need to be ashamed… I’ve made this mistake myself. In fact, I struggled for years before I finally figured out the truth about getting lean, defined abs. Here’s the TRUTH… Five invaluable tips to help you step up from riding 60 to 100 miles. Want to graduate from 60-mile rides to 100-milers? 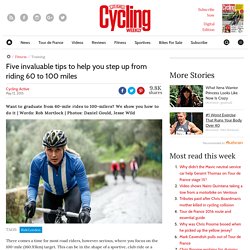 We show you how to do it | Words: Rob Mortlock | Photos: Daniel Gould, Jesse Wild There comes a time for most road riders, however serious, where you focus on the 100-mile (160.93km) target. This can be in the shape of a sportive, club ride or a personal challenge, alone or with a group. For some, 100 miles is no big deal, just something they do every Sunday. For others it can be the single biggest physical challenge they will ever undertake on a bike. Many cyclists, however, fall somewhere between the two and may already be comfortable with 50-60 mile rides but are eyeing the triple-figured milestone for their next achievement. Just how big is the jump from 60 to 100 miles? FoundMyFitness. 5 Killer Workouts To Get You Race Ready. Race Harder! Cycling Nutrition Pro Tips.

How To Make Energy Gels Work For You – Fuel Like A Pro Cyclist. Daily News Digest. In today’s edition of the Daily News Digest: Orica GreenEdge names best all round Tour de France team in its history; RCS Sport announces return of its ‘Trittico di Autunno’ trio of races; Alpecin to drop ‘doping for your hair’ slogan during the Tour de France; Small to debut for Bigla Pro Cycling in the Giro Rosa; Heinrich Haussler on his up-and-down season and life beyond cycling; Appollonio provisionally suspended after positive test for EPO; Lizzie Armitstead: best in the world; Amy’s Wall is back in 2015; 2015 Orica-GreenEdge Tour de France team announcement; Vittorio Brumotti dazzles in Road Bike Freestyle 2; The GCN Show Ep. 129: Does Aero Matter? 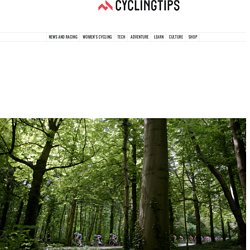 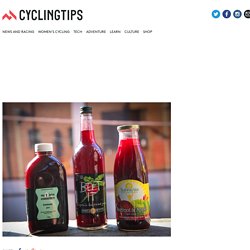 It’s been around for a few years now. Mark Cavendish coined the hashtag #pissingrainbow to describe the effect it had on his urine (it goes an orangey-pink colour, which is normal and harmless). Like many supplements before it, beetroot juice has followed the typical pattern that accompanies these types of products. In my last article, I described this pattern of research, marketing and use by athletes. 5 Simple Exercises that Strengthen Your Lower Back. VO2 and VO2max. What are VO2 and VO2max? 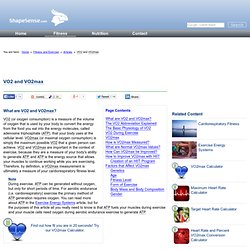 VO2 (or oxygen consumption) is a measure of the volume of oxygen that is used by your body to convert the energy from the food you eat into the energy molecules, called adenosine triphosphate (ATP), that your body uses at the cellular level. VO2max (or maximal oxygen consumption) is simply the maximum possible VO2 that a given person can achieve. VO2 and VO2max are important in the context of exercise, because they are a measure of your body's ability to generate ATP, and ATP is the energy source that allows your muscles to continue working while you are exercising. Therefore, by definition, a VO2max measurement is ultimately a measure of your cardiorespiratory fitness level. Note During exercise, ATP can be generated without oxygen, but only for short periods of time. How To Train For Long Climbs. How To Train For Power - Tips For Improving Your Power On The Bike.

How To Ride Long Distances. How To Improve Your FTP (Functional Threshold Power) 5 Legal 'Cheats' To Help You To Cycle Faster. Top tips to sleep better and ride faster (video) Is sleep the new secret weapon in the ever more intense battle among pro cycling teams? 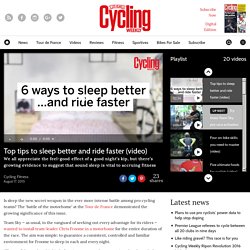 The ‘battle of the motorhome’ at the Tour de France demonstrated the growing significance of this issue. Team Sky — as usual, in the vanguard of seeking out every advantage for its riders — wanted to install team-leader Chris Froome in a motorhome for the entire duration of the race. The aim was simple: to guarantee a consistent, controlled and familiar environment for Froome to sleep in each and every night. “The confidence that this kind of environment produces puts its value through the roof,” explains Nick Littlehales, a sleep coach from sportsleepcoach.com. “By confidence I mean confidence that you’ve got the best possible conditions to get a good night’s sleep with the environment perfectly set up for recovery,” Craig Maclean Rollapaluza Record. Video Gait Analysis of Radcliffe, Goucher, Petrova. Hip Flexor animation and tightness. James White Drinks Beet It Organic Beetroot Juice with Ginger Beetroot with Ginger. Beet IT with Ginger is a unique twist on our original Organic beetroot juice (not from concentrate). 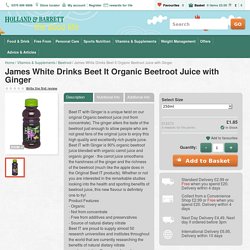 How much beetroot juice can increase your exercise performance? Prof. Andrew Jones. The best carbs for cycling - what to eat and when - BikeRadar. Carbohydrates sometimes get a bad press, but the right carbs at the right time are the cyclist’s friend. 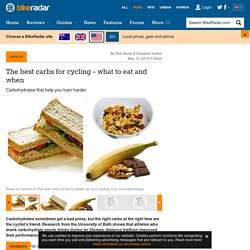 Research from the University of Bath shows that athletes who drank carbohydrate sports drinks during an Olympic distance triathlon improved their performance times. “We showed that ingesting a relatively high concentration of carbohydrates, as opposed to taste-matched water, during the cycle section resulted in a significant improvement in subsequent run performance,” explains University of Bath’s lead researcher Dr Kerry McGawley. The study shed new light on the topic of energy conversion from carbohydrates and the optimum ways of creating energy from carbs – as well as tasting loads of sweet things in the process. Good carb, bad carb The selection of energy drinks, gels and bars on the market is bewildering.