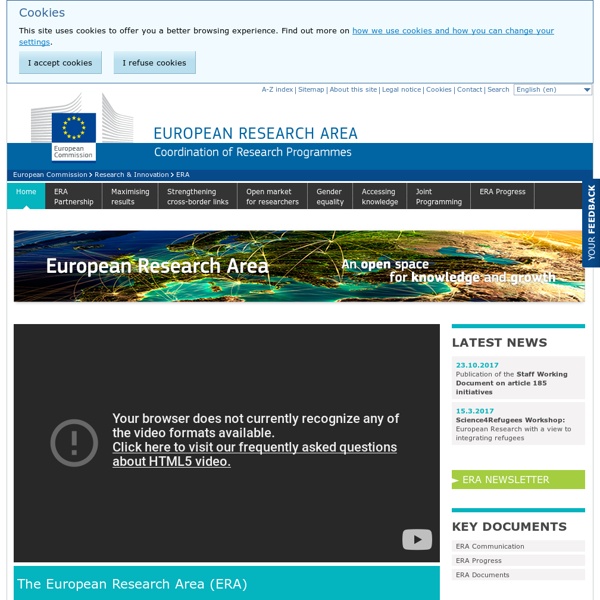 Cookies This site uses cookies to offer you a better browsing experience. Find out more on how we use cookies and how you can change your settings. European Commission European Research Area - ERA Accessibility tools Go to content Service tools Language selector Navigation path The European Research Area (ERA) A unified area open to the world, in which scientific knowledge, technology and researchers circulate freely. Boosting investment and promoting national competition. On common research agendas on grand challenges and infrastructures. Facilitating mobility, supporting training and ensuring attractive careers. Encouraging gender diversity to foster science excellence and relevance. To guarantee access to and uptake of knowledge by all. Monitoring ERA implementation at country and research organisation level. SAVE THE DATE! The third edition of the ERA Newsletter is now online RESAVER: Award of the contract to support the new pan-EU pension fund ERA Communication ERA Progress ERA Documents Europe 2020

FP7 9 July 2012 FP7: the future of European Union research policy As part of a €10.8 billion budget for research and innovation agreed for 2013, the European Commission has announced an €8.1 billion euro package of calls for proposals under the EU’s Seventh Framework Programme for Research (FP7). This is the final and largest ever package of FP7 calls, and is an important part of the Commission’s commitment to work for growth and jobs in Europe. The budget and work programme are agreed in 2012 and funding will be awarded in 2013 – closing dates for proposals from September 2012.The calls address key concerns faced by Europeans where action at EU level is essential. €4.8 billion will be invested in thematic areas, with specific priorities to preserve oceans and water, better use of raw materials, efficient energy, promote efficiency in the processing of biological resources, develop smart cities and tackle issues such as public sector reform, brain research and anti-microbial resistance.

Competitive Automotive Regulatory System for the 21st century - Automotive - Enterprise and Industry As part of the Commission's modern industrial policy, the CARS 21 (Competitive Automotive Regulatory System for the 21st century) process, which was initially launched in 2005, aims to make recommendations for the short-, medium-, and long-term public policy and regulatory framework of the European automotive industry. This framework enhances global competitiveness and employment, while sustaining further progress in safety and environmental performance at a price affordable to the consumer. Background Innovation Union 24 April 2014 ONE Conference Brussels 2014: Policies (R)Evolution and Every European Digital, Brussels The Future has begun.

Automotive - Enterprise and Industry 1) To strengthen the competitiveness of the automotive industry The aim is to identify and assess policy issues of significant importance to the competitiveness of the EU automotive industry and to suggest solutions that take into consideration economic, social and environmental objectives. 2) To complete, adapt and simplify the Internal Market regulatory framework Cars: EU emissions laws Press release - December 2, 2011 Brussels - The European car industry has been hit by infighting and has failed to agree a unified position on an upcoming EU law regarding vehicle emissions, claimed Greenpeace today. The chief executives of Europe’s biggest car companies gathered for a meeting to decide their lobbying position on the future of EU car efficiency standards this morning. But in a Brussels press conference they told reporters they could not reach an agreement. Volkswagen has been stalling EU laws to reduce the impact cars have on the climate and make them more fuel efficient Greenpeace climate campaigner Sara Ayech said: “The more progressive car companies must be furious with Volkswagen, who are dragging their feet and trying to stall.

EU biofuels significantly harming food production in developing countries EU companies have taken millions of acres of land out of food production in Africa, central America and Asia to grow biofuels for transport, according to development campaigners. The consequences of European biofuel targets, said the report by ActionAid, could be up to 100 million more hungry people, increased food prices and landlessness. The report says the 2008 decision by EU countries to obtain 10% of all transport fuels from biofuels by 2020 is proving disastrous for poor countries. Developing countries are expected to grow nearly two-thirds of the jatropha, sugar cane and palm oil crops that are mostly used for biofuels. "To meet the EU 10% target, the total land area directly required to grow industrial biofuels in developing countries could reach 17.5m hectares, over half the size of Italy. Additional land will also be required in developed nations, displacing food and animal feed crops onto land in new areas, often in developing countries," says the report.

Biofuels - Trinity College Over the past several years the changing world energy situation has generated intensive discussion about biofuels, much of it promising a source of environmentally sound energy that would also benefit world farmers. At the same time biofuels production has raised a variety of concerns about its impacts on agricultural land and natural habitats, food prices and its impact on the poor and about the real reductions in CO2 emissions that biofuels provide.Policy coherence for development means that the EU should avoid damaging developing countries with its policies for renewable energies through biofuels and seek to maximise the beneficial effects. . Biofuels are a wide range of fuels derived from biomass. The term covers solid biomass, liquid biofuels and various biogases. Liquid biofuels for transportation can be produced from a variety of feedstocks, many of which are used in the agricultural food chain. European Union policy

EU “will not abandon” biofuels in face of criticism By John Parnell The EU will not abandon biofuels a spokesperson has said. (Source: Wikimedia/Alaz) The EU will stand by its commitment to biofuels despite criticism from an NGO that that growing crops for fuel raises food prices and displaces local communities. Energy Policy A well conceived energy policy should address the needs and avail of opportunities in social, environmental, technical, regulatory, and economic dimensions. SEAI is committed to maintaining a central role in providing defensible evidence and analysis that supports the implementation of policy on the ground. Sustainable energy is no longer simply one facet of energy policy. EU R&D budget Today, July 9th the European Commissioner for Research, Innovation and Science, Maire Geoghegan-Quinn announced the next and final set of calls for proposals valued at € 8.1 billion for the EU's 7th RTD Framework Programme with a total budget of €55 billion being allocated for innovative research between 2007-2013. The Commission has proposed that the successor programme for 2014-2020, known as Horizon 2020 receive €80 billion as part of the multi-annual budget currently under negotiation, whilst Parliament's temporary committee on future budgetary needs had suggested the doubling of the research budget for the next period, to €100bn. Guy Verhofstadt, leader of the Liberals and Democrats in the European Parliament said: