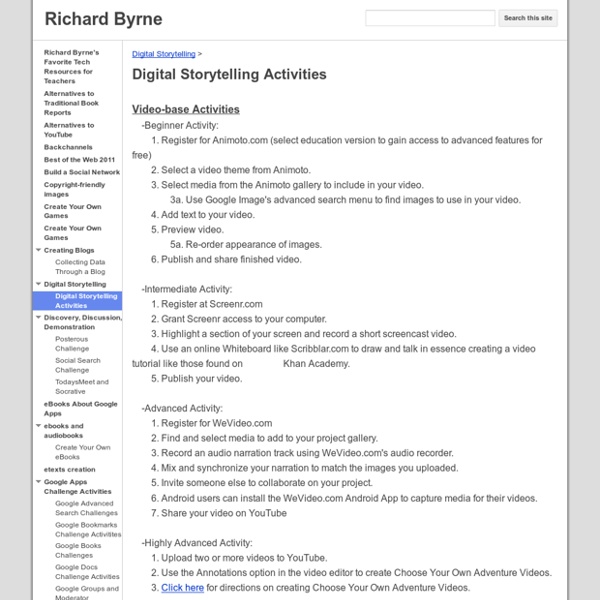 30+ Open Wikis Every Educator Should Know About This is the first in a series of ‘Best of 2011′ posts where we share some of the best education-related materials of the past year. Be sure to check back on a regular basis as we’ve got some pretty exciting stuff coming soon! Are you interested in being a part of a dynamic digital environment capable of changing the world of education? There are wikis out there that are just waiting for you to join and offer up your $.02. From wikis on teaching in the United Kingdom to art to web 2.0 tools, there’s a wiki for everyone. The list of wikis below is just a smattering of some of the best open wikis available today.

Apuntes Skamasle | Manuales y Tutoriales 7 Awesome Emmet HTML Time-Saving Tips 7 Awesome Emmet HTML Time-Saving Tips Emmet, formerly Zen Coding, is one of the most downright practical and productive text editor plugins that you will ever see. With its ability to instantly expand simple abbreviations into complex code snippets, Emmet makes you feel like a powerful coding wizard with the world at your fingertips. As a follow up to our previous article on the basics of Zen Coding, today we’re going to dive into seven awesome tips to help you become a true Emmet pro. 1. Our first tip is that you rarely need to type out “div” in your macro. As you can see, both abbreviations yield the same result. Implicit Tag Names This quirk is actually part of a greater feature called “implicit tag names”, which attempts to interpret the tag that you want based on context. 2. If you’re using Emmet to expand simple class names into divs, good for you, you’re off to a decent start. Climbing Up Now let’s move on and look at moving up the tree. 3. 4. 5. 6. 7. Try Them Out!

CSS3 & HTML5 Help Protect Your Child's Online Reputation From Damage | Safetyweb Cyberbullying simply refers to the act of bullying online. This type of bullying can consist of any of the following actions committed by an individual or group to another individual or group: Threats of violence Hate speech Harassment Peer pressure Bribery Psychological abuse Extortion Further, these offenses are often committed by people impersonating someone else, anonymously, or under the guise of a group, making accountability and preventability difficult. The definition of cyberbullying has broadened over the years since it has expanded to include any number of internet connected devices, web sites, behaviors, victims, and victimizers. Most computer usage was still limited to desktop computers Broadband internet connectivity was more limited Most mobile devices were not equipped with cameras and/or data services Social Networks were not mainstream Given these constraints, you did not hear about it as much as it was generally less frequent, and was usually confined to smaller groups.

Cyberbullying: How Bullies Have Moved From the Playground to the Web Over the past decade, the world of learning and education has become steadily more immersed in the technology available to our modern society. From elementary school students using laptops in class, to collegiate learning taking place online, such as through online bachelor’s degree programs, students are plugging in, signing on, and becoming ever more engaged in the digital and cyber world. While the tight-knit relationship between education and technology has afforded some incredible learning opportunities, like in the burgeoning world of online college education, as technology penetrates younger and younger demographics, certain social problems become apparent: namely, cyberbullying. The frequency with which kids and teens are being bullied online has risen at an alarming rate. Kids are gaining access to cell phones, social media, and general communication platforms at ever earlier ages, and when this access is used to harm rather than help, the consequences can be dire.

What is Cyberbullying Cyberbullying is bullying that takes place using electronic technology. Electronic technology includes devices and equipment such as cell phones, computers, and tablets as well as communication tools including social media sites, text messages, chat, and websites. Examples of cyberbullying include mean text messages or emails, rumors sent by email or posted on social networking sites, and embarrassing pictures, videos, websites, or fake profiles. Why Cyberbullying is Different Kids who are being cyberbullied are often bullied in person as well. Cyberbullying can happen 24 hours a day, 7 days a week, and reach a kid even when he or she is alone. Effects of Cyberbullying Cell phones and computers themselves are not to blame for cyberbullying. Kids who are cyberbullied are more likely to: Use alcohol and drugs Skip school Experience in-person bullying Be unwilling to attend school Receive poor grades Have lower self-esteem Have more health problems Frequency of Cyberbullying