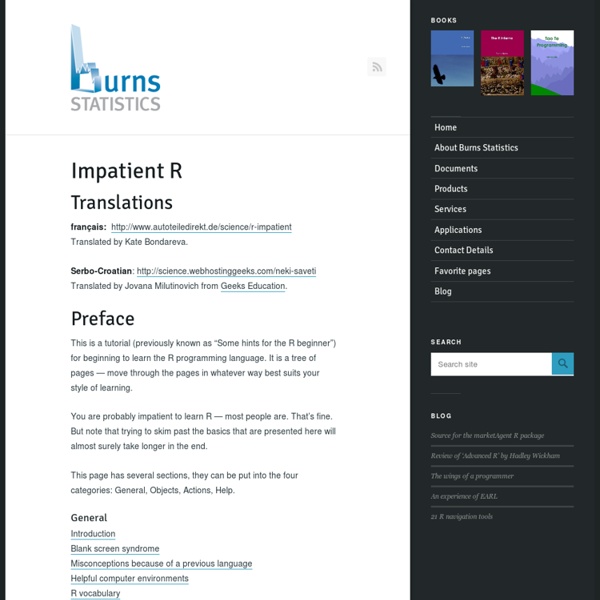 Translations français: Translated by Kate Bondareva. Serbo-Croatian: Translated by Jovana Milutinovich from Geeks Education. Preface This is a tutorial (previously known as “Some hints for the R beginner”) for beginning to learn the R programming language. It is a tree of pages — move through the pages in whatever way best suits your style of learning. You are probably impatient to learn R — most people are. This page has several sections, they can be put into the four categories: General, Objects, Actions, Help. General Introduction Blank screen syndrome Misconceptions because of a previous language Helpful computer environments R vocabulary Epilogue Objects Key objects Reading data into R Seeing objects Saving objects Magic functions, magic objects Some file types Packages Actions What happens at R startup Key actions Errors and such Graphics Vectorization Make mistakes on purpose Related:  R programming • R-Programming

Some hints for the R beginner Some hints for the R beginner Learning R “Impatient R” provides a brief grounding in the basics of using R. Beginner’s Guide to R from Computerworld. Try R is a fun way of learning some R. swirl (Statistics With Interactive R Learning) is another interactive environment for learning R. DataCamp has yet another interactive tutorial. There is a set of two-minute videos called R twotorials. One Page R (which in total is many pages) covers a number of topics. “21 R navigation tools” is about how to find objects and information in R. There are many books about R. Why R? R is a good way to avoid problems with spreadsheets. See also “Why use the R language?” R and finance R is used a lot in finance, and that use is growing. The R language category of the Portfolio Probe blog has examples of R being used in the context of quantitative finance. Other R resources There are several other R task views. The R-bloggers site aggregates blog posts about R. There are R user groups around the world. See also

Translating between R and SQL: the basics An introductory comparison of using the two languages. Background R was made especially for data analysis and graphics. SQL was made especially for databases. They are allies. The data structure in R that most closely matches a SQL table is a data frame. A mashup There is an R package called sqldf that allows you to use SQL commands to extract data from an R data frame. it must be installed on your machine (once)it must be available in each R session where it is used You can use sqldf by doing (one time only, and assuming an internet connection): install.packages("sqldf") Then in each R session where you want to use it: require(sqldf) To simplify the examples, we’ll slightly modify one of the inbuilt data frames: myCO2 <- CO2 attributes(myCO2) <- attributes(CO2)[ c("names", "row.names", "class")] class(myCO2) <- "data.frame" Note that the character between C and 2 is a capital-O and not a zero. Column names In R the colnames function returns the names of the columns: Subsetting columns All columns

Why R R (see also here) is a free language and environment for statistical computing and graphics. It is superior to other graphics/analysis packages commonly used in Astronomy, e.g. supermongo, pgplot, gnuplot, and features a very wide range of statistical analysis and data plotting functions. Furthermore, R is already the most popular amongst the leading software for statistical analysis, as measured by a variety of indicators, and is rapidly growing in influence. R is really important to the point that it’s hard to overvalue it. It allows statisticians to do very intricate and complicated analyses without knowing the blood and guts of computing systems. Google research scientist, quoted in the New York Times These pages are intended to be a brief summary of some basic information needed to get started quickly with R in a broadly astronomical context.

Microsoft R Open: The Enhanced R Distribution · MRAN Skip to main content Microsoft R Open: The Enhanced R Distribution Microsoft R Open, formerly known as Revolution R Open (RRO), is the enhanced distribution of R from Microsoft Corporation. It is a complete open source platform for statistical analysis and data science. The current version, Microsoft R Open 3.2.5, is based on (and 100% compatible with) R-3.2.5, the most widely used statistics software in the world, and is therefore fully compatibility with all packages, scripts and applications that work with that version of R. It includes additional capabilities for improved performance, reproducibility, as well as support for Windows and Linux-based platforms. Like R, Microsoft R Open is open source and free to download, use, and share. Learn more... Download Release News Learn More Get Started! More Resources

Business Intelligence and Agile Development: Statistical Analysis with R and Microsoft SQL Server 2012 It’s been awhile since I’ve written a blog post, but that doesn’t mean that I haven’t been thinking about things to write about and discuss here. Recently, I had the opportunity to attend an alpha delivery of EMCs “Data Science and Big Data Analytics” course (Read about the course on EMC Education Services site here: ) and was really taken by a couple of points that the course brought home: 1) There’s much more to statistical analysis than I had ever thought about. (Being a Microsoft SQL Server and Microsoft BI Stack kinda guy, I always figured that you needed Excel and SSAS to do real statistical analysis. 2) Big Data Analytics is a really cool technology discipline! The course itself was based on the EMC Greenplum Database (Community Edition, which you can download and use for free!) R and Statistical Analysis R is an open source “software environment” that is used primarily for statistical analysis. R and SQL Server Conclusion

GitHub - swirldev/swirl_courses: A collection of interactive courses for the swirl R package. A tutorial on object oriented programming in R - Quant Lego This tutorial gives a brief introduction on object oriented programming in R, covering both S3, S4, reference (R5), and R6 classes. 1 S3 Classes 1.1 The basic idea 1.1.1 Class attribute Everything in R is treated as an object, and one common attribute associated with an object is its class. You can set the class attribute of an object using the class() function. > (stud1<-list(name="Michael",age=9,gender="Male",grade=3)) $name [1] "Michael" $age [1] 9 $gender [1] "Male" $grade [1] 3 > class(stud1) [1] "list" > class(stud1)<-append(class(stud1),"student") > class(stud1) [1] "list" "student" 1.1.2 Method dispatch One way to define a method for a class is to use the UseMethod() function to define a hierarchy of functions that will react appropriately. Arguments: generic — a character string naming a function (and not a built-in operator).object — an object whose class will determine the method to be dispatched. Notes: 1.1.3 Memory management by environments 1.2 Defining S3 class Comments: Examples:

quantmod: Quantitative Financial Modelling Framework 60+ R resources to improve your data skills This list was originally published as part of the Computerworld Beginner's Guide to R but has since been expanded to also include resources for advanced beginner and intermediate users. If you're just starting out with R, I recommend first heading to the Beginner's Guide. These websites, videos, blogs, social media/communities, software and books/ebooks can help you do more with R; my favorites are listed in bold. Want to see a sortable list of resources by subject and type? Books and e-books R Cookbook. R Graphics Cookbook. R in Action: Data analysis and graphics with R. The Art of R Programming. R in a Nutshell. Visualize This. R For Dummies. Introduction to Data Science. R for Everyone. Statistical Analysis With R: Beginner's Guide. Reproducible Research with R and RStudio. Exploring Everyday Things with R and Ruby. Online references 4 data wrangling tasks in R for advanced beginners. Data manipulation tricks: Even better in R. Cookbook for R. Quick-R. R Reference Card. Online tools