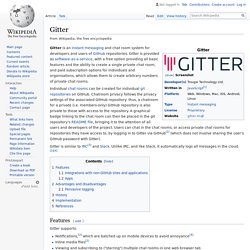 Twilio - Wikipedia. Twilio (pronounced TWILL-e-o) is a cloud communications platform as a service (PaaS) company based in San Francisco, California. 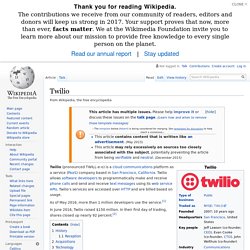 Twilio allows software developers to programmatically make and receive phone calls and send and receive text messages using its web service APIs. Twilio's services are accessed over HTTP and are billed based on usage. As of May 2016, more than 1 million developers use the service.[1] In June 2016, Twilio raised $150 million. Data compression & security. Exar's data compression and security solutions address the evolving IT infrastructure needs by providing high availability and performance, workload optimization, security for data in transit or at rest, storage capacity optimization (SCO) and reduced total cost of ownership (TCO) ➢ AltraHD for Hadoop Mobile devices, social media, sensor-enabled e-commerce, the cloud and web 2.0 applications are transforming the global IT infrastructure. 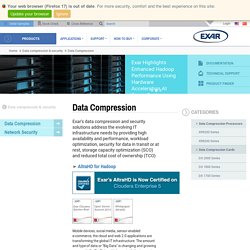 The amount and type of data or "Big Data" is changing and growing exponentially. Big Data, which now includes increasing amounts of unstructured data, needs to be available anytime, anywhere and in various formats. Kaggle - Wikipedia. In 2010, Kaggle was founded as a platform for predictive modelling and analytics competitions on which companies and researchers post their data and statisticians and data miners from all over the world compete to produce the best models. 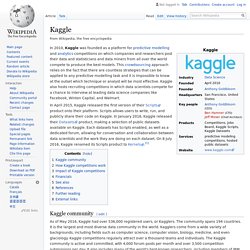 This crowdsourcing approach relies on the fact that there are countless strategies that can be applied to any predictive modelling task and it is impossible to know at the outset which technique or analyst will be most effective. Kaggle also hosts recruiting competitions in which data scientists compete for a chance to interview at leading data science companies like Facebook, Winton Capital, and Walmart. In April 2015, Kaggle released the first version of their Scripts product onto their platform. Scripts allows users to write, run, and publicly share their code on Kaggle. In January 2016, Kaggle released their Datasets product, making a selection of public datasets available on Kaggle. Product. Seagate. Seagate Technology - Wikipedia. Seagate Technology PLC (commonly referred to as Seagate) is an American data storage company. 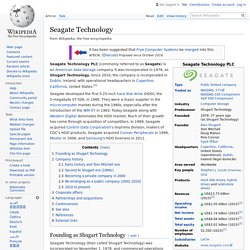 It was incorporated in 1978, as Shugart Technology. Since 2010, the company is incorporated in Dublin, Ireland, with operational headquarters in Cupertino, California, United States.[2] Seagate developed the first 5.25-inch hard disk drive (HDD), the 5-megabyte ST-506, in 1980. They were a major supplier in the microcomputer market during the 1980s, especially after the introduction of the IBM XT in 1983. Dot Hill Systems - Wikipedia. Dot Hill Systems Corp wa a manufacture of computer Storage area network arrays. 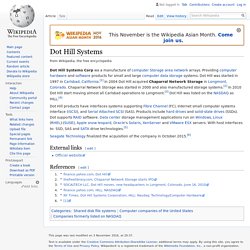 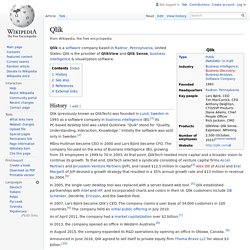 Qlik is the provider of QlikView and Qlik Sense, business intelligence & visualization software. History[edit] Qlik (previously known as QlikTech) was founded in Lund, Sweden in 1993 as a software company in business intelligence (BI).[1] Its PC-based desktop tool was called QuikView. "Quik" stood for "Quality, Understanding, Interaction, Knowledge. " Initially the software was sold only in Sweden.[2] Måns Hultman became CEO in 2000 and Lars Björk became CFO. 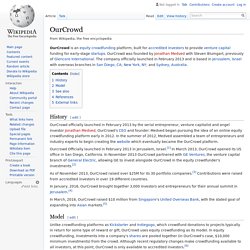 OurCrowd was founded by Jonathan Medved with Steven Blumgart, previously of Glencore International. The company officially launched in February 2013 and is based in Jerusalem, Israel with overseas branches in San Diego, CA; New York, NY; and Sydney, Australia. Optimal Performance and Data Protection, SSD, DataPacs. ISEs, as mentioned in the previous section, provide a carrier-grade scale-out high-performance storage infrastructure, with a five- to seven-year operating lifespan, and provide 2 to 10 times the performance of alternatives, at 30-70% of the total cost of ownership of those alternatives. 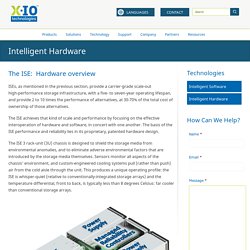 The ISE achieves that kind of scale and performance by focusing on the effective interoperation of hardware and software, in concert with one another. The basis of the ISE performance and reliability lies in its proprietary, patented hardware design. BnkToTheFuture. BnkToTheFuture, formerly BankToTheFuture, is a global online investment platform (Equity CrowdFunding) mainly focused on financial innovation and technology. 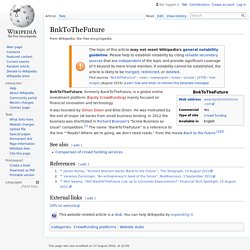 Features[edit] OwnCloud users can manage calendars (CalDAV), contacts (CardDAV) scheduled tasks and streaming media (Ampache) from within the platform. Blue Jeans Network. BlueJeans Network is a company that provides an interoperable cloud-based video communications service that connects participants across a wide range of devices and conferencing platforms.[1][2][3][4][5][6][7] It is headquartered in Mountain View, CA.[8] History[edit] Krish Ramakrishnan and Alagu Periyannan founded BlueJeans Network in 2009, the development of which ended in six months of field trials for the technology.

Prior to founding the company, Ramakrishnan was an entrepreneur-in-residence at Accel Partners and Periyannan was the CTO of Blue Coat Systems as well as a former executive for Apple Inc. Avere - FlashCloud™ - Software to Reduce Cloud Latency. Put your data anywhere. No sacrifices. No roadblocks. Your storage has never been so flexible. FlashCloud expands NAS as you've never thought possible. Avere Cloud NAS, powered by FlashCloud™, eliminates the latency associated with the cloud leveraging the Avere Edge-Core architecture to get active data right where users need it. Built for the cloud, FlashCloud running on FXT Edge filers uses object APIs to connect to public and private clouds, translating standard NAS protocols and protecting your application investments.

Cloud Snapshots, part of the Avere OS, are closely integrated with the FlashCloud to deal with the performance and semantics of cloud storage. Your infrastructure has never looked better. Equinix. Equinix, Inc. is an American public corporation that provides carrier-neutral data centers and internet exchanges to enable interconnection. The company offers colocation, interconnection solutions and related services to enterprises, content companies, systems integrators and 1,100+ network service providers worldwide.

Equinix data centers are also home to more than 500 cloud service providers, and the company operates the Equinix Cloud Exchange, a service enabled by a proprietary software that allows customers to connect to multiple clouds simultaneously.[1] ZDNet. ZDNet is a business technology news website published by CBS Interactive, along with TechRepublic and SmartPlanet. The brand was founded on April 1, 1991, as a general interest technology portal from Ziff Davis and evolved into an enterprise IT-focused online publication owned by CNET Networks. History[edit] Beginnings: 1991 to 1995[edit] ZDNet began as a subscription-based digital service called "ZiffNet" that offered computing information to users of CompuServe.