How to Start a Startup 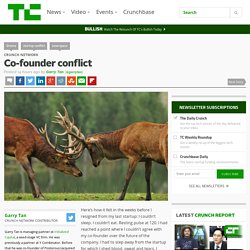 He was previously a partner at Y Combinator. Before that he was co-founder of Posterous (acquired by Twitter) and an early employee at Palantir Technologies. How to Use Thought Experiments to De-Risk Your Startup · Coding VC. 15 Dec 2016 "In preparing for battle, I have always found that plans are useless but planning is indispensable. 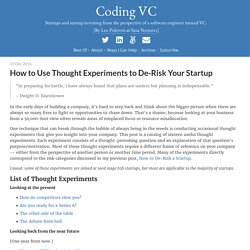 " - Dwight D. How we turned $140k on Kickstarter into $40k in debt. And how we broke even. This is Part 3 of “Making The Contender: Conception to Completion”. 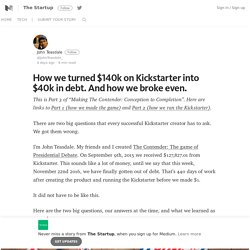 Here are links to Part 1 (how we made the game) and Part 2 (how we ran the Kickstarter). There are two big questions that every successful Kickstarter creator has to ask. We got them wrong. I’m John Teasdale. My friends and I created The Contender: The game of Presidential Debate. It did not have to be like this. Here are the two big questions, our answers at the time, and what we learned as a result. Question 1: Where to manufacture? In games the big options are USA and China. We get to put big old ‘Made in the USA’ large on the box.Faster shipping time, especially around the holidays.Transparent, quick communication. Waaaaay cheaper. After a team meeting, we decided to go with the USA. We chose a large US manufacturer that printed cards for Uno, Settlers of Catan, and Magic: The Gathering. Alas, large companies work with other large companies and move at the speed of large companies. The messages started pouring in. Daniel H Pink: employees are faster and more creative when solving other people's problems.

Fewer than half of the participants in the first group figured out the problem. 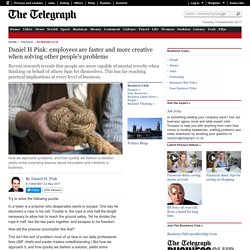 But in the second group, 66pc came up with the solution. In other words, people were faster and more creative when they tackled the problem on behalf of others rather than for themselves. What I’ve learned from seeing 20k company pitches - Bringing transparency to seed investing... I just passed my 2 year mark at 500 Startups. 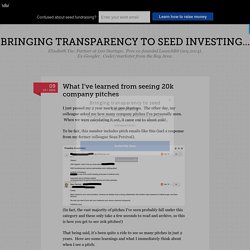 The other day, my colleague asked me how many company pitches I’ve personally seen. When we were calculating it out, it came out to about 20k! To be fair, this number includes pitch emails like this (incl a response from my former colleague Sean Percival). (In fact, the vast majority of pitches I’ve seen probably fall under this category and these only take a few seconds to read and archive, so this is how you get to see 20k pitches!) The Three Infrastructure Mistakes Your Company Must Not Make.

When Avi Freedman was getting ready to graduate Temple University in 1992, there was no way to buy internet service in Philadelphia. 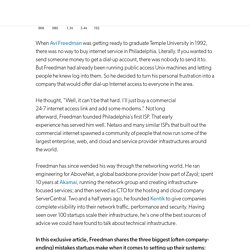 Literally. If you wanted to send someone money to get a dial-up account, there was nobody to send it to. But Freedman had already been running public access Unix machines and letting people he knew log into them. Breaking a myth: Data shows you don’t actually need a co-founder. How are you, Jon? 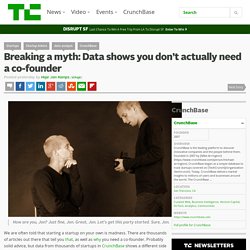 Just fine, Jon. Great, Jon. Let’s get this party started. Sure, Jon. We are often told that starting a startup on your own is madness. To ensure that I had the most useful and well-reported data, I limited my research to “successful” startups. The numbers in both cases vary slightly, but there are some strong similarities, in both cases re-confirming data from about 10 years ago, where a much smaller data set concluded that successful companies had, on average, 2.09 founders. Startups that have raised more than $10 million in funding My deep dive into the CrunchBase API gave me a total of 7,348 companies that have raised more than $10 million each. This graph shows the number of startups that have raised more than $10 million from investors, broken down by the number of founders associated with the company. n=7,348 It turns out that almost half of the companies successful in raising funding did so with a solo founder.

I Don’t Care How Well You Code, Understand Your Compensation — Hacker Noon. Jessica Livingston's Pretty Complete List on How Not to Fail · The Macro. For weekly re­caps of The Macro, sign up here. 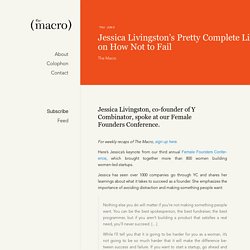 Here’s Jes­sica’s keynote from our third an­nual Fe­male Founders Con­fer­ence, which brought to­gether more than 800 women build­ing women-led star­tups. Jes­sica has seen over 1000 com­pa­nies go through YC and shares her learn­ings about what it takes to suc­ceed as a founder. She em­pha­sizes the im­por­tance of avoid­ing dis­trac­tion and mak­ing some­thing peo­ple want: Noth­ing else you do will mat­ter if you’re not mak­ing some­thing peo­ple want.

You can be the best spokesper­son, the best fundraiser, the best pro­gram­mer, but if you aren’t build­ing a prod­uct that sat­is­fies a real need, you’ll never suc­ceed. […] While I’ll tell you that it is going to be harder for you as a woman, it’s not going to be so much harder that it will make the dif­fer­ence be­tween suc­cess and fail­ure.