Knowly sur Twitter : "Another week of munching glass. Gonna love every minute of it. #startup #founder #growthhacking... The Age of Unicorns. Stewart Butterfield had one objective when he set out to raise money for his startup last fall: a billion dollars or nothing. 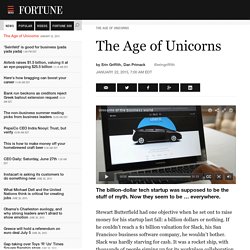 If he couldn’t reach a $1 billion valuation for Slack, his San Francisco business software company, he wouldn’t bother. Slack was hardly starving for cash. It was a rocket ship, with thousands of people signing up for its workplace collaboration tools each week. What Slack needed, Butterfield believed, was the cachet of the billion-dollar mark. “Yes, it’s arbitrary because it’s a big round number,” says Butterfield, 41. Sure enough, in October—less than a year after the company released its namesake product—Slack announced the close of a $120 million round of financing. It wasn’t long ago that the idea of a pre-IPO tech startup with a $1 billion market value was a fantasy. Today the technology industry is crowded with billion-dollar startups.

Technology is driving the boom. Then there are the broader financial trends. (Click thumbnail to see full graphic) This Business Name Generator Is Better than Most. The idea of a random name generator for businesses or startups is hardly a new one. 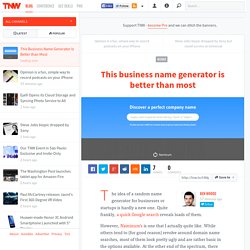 Quite frankly, a quick Google search reveals loads of them. However, Naminum’s is one that I actually quite like. While others tend to (for good reason) revolve around domain name searches, most of them look pretty ugly and are rather basic in the options available. At the other end of the spectrum, there are some with more advanced options, but they’re still not that usable. Naminum, however, just asks you to fill in a word or two (or leave it blank if you just want a huge list) to get started.

Below this, it shows the original search term, plus additional letters added. If you want to prepend something to your search term, there’s a separate tab of suggestions just for that, making it nice and easy to pick your way through rather than presenting everything in one huge list. ➤ Naminum Read next: 9 startups explain how they chose their names. Recent Startup Trends - Coding VC. I spent 2013 as one of four partners at a seed stage fund with a strong data focus*. 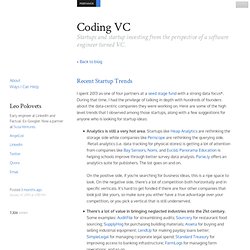 During that time, I had the privilege of talking in depth with hundreds of founders about the data-centric companies they were working on. Here are some of the high level trends that I observed among those startups, along with a few suggestions for anyone who is looking for startup ideas: Analytics is still a very hot area. Startups like Heap Analytics are rethinking the storage side while companies like Periscope are rethinking the querying side. Retail analytics (i.e. data tracking for physical stores) is getting a lot of attention from companies like Bay Sensors, Nomi, and Euclid.

10 Startups to Watch in 2014. If you only focus on the multi-billion dollar valuations of young companies like Pinterest, Uber and Snapchat, you might assume 2013 has been a very good year for tech startups. 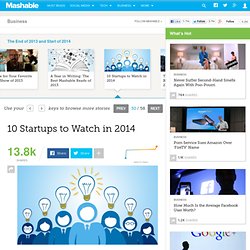 In reality, it has been more of a bittersweet year. Many early-stage companies struggled to raise a Series A rounds of funding, a phenomenon commonly referred to as the "Series A Crunch," which for some meant to fight for their survival. Meanwhile, several later-stage companies like Fab and Rdio laid off large portions of their staff to rein in costs. Even so, plenty of promising startups raised funds and launched (or teased) exciting features this year in markets ranging from mobile payments to media. What's more, the success of Twitter's IPO has boosted investor interest in other social startups and may help revive the market for tech IPOs, which suffered after Facebook's troubled public offering in 2012. 1. 2. The Terrible Management Technique That Cost Microsoft Its Creativity. Freelancing: A 6-Month Retrospective - Mike Rooney.

At the end of 2011 I quit my full-time job to pursue part-time freelancing in order to have more time and flexibility. 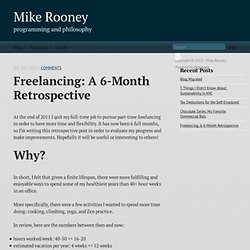 It has now been 6 full months, so I’m writing this retrospective post in order to evaluate my progress and make improvements. Hopefully it will be useful or interesting to others! In short, I felt that given a finite lifespan, there were more fulfilling and enjoyable ways to spend some of my healthiest years than 40+ hour weeks in an office. More specifically, there were a few activities I wanted to spend more time doing: cooking, climbing, yoga, and Zen practice.