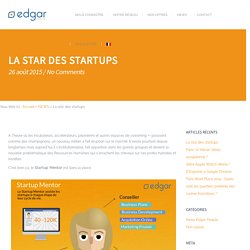 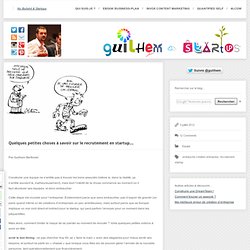 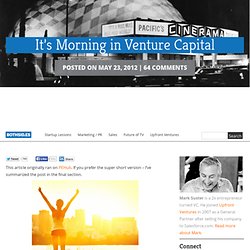 If you prefer the super short version – I’ve summarized the post in the final section. Many observers of the venture capital industry have questioned whether its best days are behind it. They are frustrated by the past decade of subpar returns for the sector. The most recent report to weigh in on the troubles of the industry was produced by the esteemed Kauffman Foundation. There are obvious reasons the industry has had less-than-desirable returns, including: massive over-funding of the sector, huge increases in inexperienced venture capitalists that took a decade to peter out, and the massive correction in the value of the public stock markets that closed many exit opportunities for half a decade.

Why startup pitches fail (and how to fix them) Nivi · October 30th, 2008 Summary: Pitches usually fail because they answer the wrong questions. 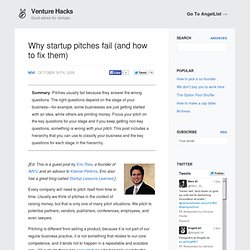 The right questions depend on the stage of your business—for example, some businesses are just getting started with an idea, while others are printing money. Focus your pitch on the key questions for your stage and if you keep getting non-key questions, something is wrong with your pitch. This post includes a hierarchy that you can use to classify your business and the key questions for each stage in the hierarchy. [Ed: This is a guest post by Eric Ries, a founder of IMVU and an advisor to Kleiner Perkins. Every company will need to pitch itself from time to time. Pitching is different from selling a product, because it is not part of our regular business practice, it is not something that relates to our core competence, and it tends not to happen in a repeatable and scalable way.

Berlin Cracks the Startup Code. On a rainy day in March 2011, Ciarán O’Leary and two colleagues crammed into a Berlin taxi and raced for the station to catch a train back to Hamburg. 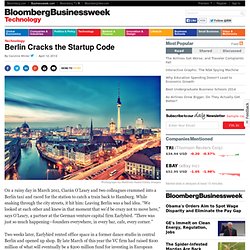 While snaking through the city streets, it hit him: Leaving Berlin was a bad idea. “We looked at each other and knew in that moment that we’d be crazy not to move here,” says O’Leary, a partner at the German venture capital firm Earlybird. “There was just so much happening—founders everywhere, in every bar, cafe, every corner.” Why Cheap Customers Cost More. I was listening to Patrick McKenzie’s podcast (with Amy Hoy as a guest), and they touched on something that I had heard before: when you offer multiple plans for a service, the cheapest plan’s customers tends to require the most support. 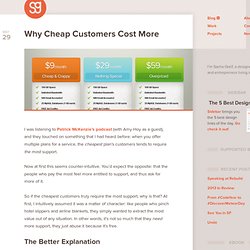 Now at first this seems counter-intuitive. You’d expect the opposite: that the people who pay the most feel more entitled to support, and thus ask for more of it. So if the cheapest customers truly require the most support, why is that? At first, I intuitively assumed it was a matter of character: like people who pinch hotel slippers and airline blankets, they simply wanted to extract the most value out of any situation. How Much Money Should a Startup Have in the Bank? By Jason Calacanis One question I get all the time from fellow entrepreneurs is “How much money should I have in the bank?” 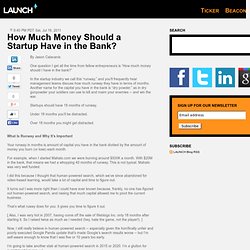 In the startup industry we call this “runway,” and you’ll frequently hear management teams discuss how much runway they have in terms of months. Another name for the capital you have in the bank is “dry powder,” as in dry gunpowder your soldiers can use to kill and maim your enemies -- and win the war. Demystifying the VC term sheet: Redemption rights. (Editor’s note: Scott Edward Walker is the founder and CEO of Walker Corporate Law Group, PLLC, a law firm specializing in the representation of entrepreneurs. 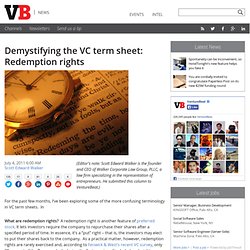 So you want to do a startup, eh? Cash is King: 8 tips for Optimizing your Startup Financing Strategy. Introduction This post aims to help startup CEOs optimize their funding strategy by examining how investors value startups, and explaining how to avoid the common cash management pitfalls. 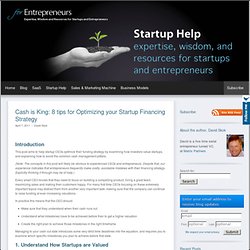 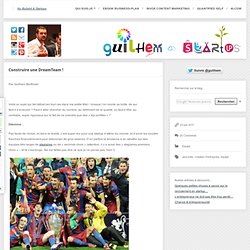 Et ça existe en Amérique ? Where Good Ideas Come From. I've been reading my friend Steven Johnson's new book Where Good Ideas Come From. Steven gave me an advance copy of the book. Founder Institute: How To Launch In 10 Steps With Less Than $2,000. For any entrepreneur, the challenge of taking an idea to launch can be a daunting and expensive journey. Fortunately, Adeo Ressi, founder of TheFunded and startup accelerator, Founder Institute, has a ten step plan. While there is no foolproof recipe for every launch, Ressi says his template will help any tech entrepreneur get a business off the ground for less than $2,000. The program, which Ressi recently presented at the Founder Institute’s Boston location, is a bare bones guide to securing your startup’s online identity, enhancing your appearance of legitimacy (through low-cost but well designed logos and marketing materials), understanding your startup’s priorities and target consumer, and finally, getting it to the point of a rough web launch.

Given that the presentation occasionally offers very specific advice (for example, step 3 centers on the use of 99designs for your logo), the ten step plan will hardly work for everyone. 1. 2. 3. Establishing Your Reputation as a Startup CEO Before Launch. Yesterday, I wrote about the things you can do to prepare your startup's website pre-launch.

But your online presence doesn't solely exist on and shouldn't solely rely on your company website. And it's incredibly valuable that just as you work on it, that you work to develop an online presence for you, the entrepreneur. Case in point: the relaunch this past week of SpeakerText, whose CEO Matt Mireles I had a chance to talk to. Looking back at the first mention of SpeakerText on ReadWriteWeb in January, that story begins, "You've probably never heard of Matt Mireles. " How to Discuss Stock Options with Your Team. I was thumbing through Twitter messages on my Blackberry on Monday (I use Twitter as a “mobile first, web second” product) when I saw the following Tweet (see graphic). I resisted the temptation to jump in with a response because I knew it was too complicated of a topic to discuss on Twitter.

Milestones to Startup Success. Update added to end of post When your startup accepts outside money (such as venture capital), you are obligated to focus on maximizing long-term shareholder value. For most startups this is directly based on your ability to grow (customers, revenue and eventually profit). Most entrepreneurs understand the importance of growth; the common mistake is trying to force growth prematurely. This is frustrating, expensive and unsustainable – killing many startups with otherwise strong potential.