How Do You Go Global Against Clones And Competitors? GoGlobal is Morten Lund’s new venture. 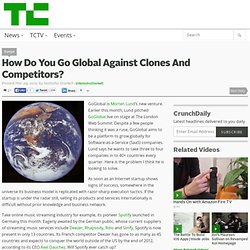 Earlier this month, Lund pitched GoGlobal live on stage at The London Web Summit. Despite a few people thinking it was a ruse, GoGlobal aims to be a platform to grow globally for Software-as-a-Service (SaaS) companies. Lund says he wants to take three to four companies in to 40+ countries every quarter. Here is the problem I think he is looking to solve. As soon as an Internet startup shows signs of success, somewhere in the universe its business model is replicated with razor-sharp execution tactics.

Take online music streaming industry for example, its pioneer Spotify launched in Germany this month. First movers have good reasons to worry about competition. So I spoke to a number of industry players to understand what it takes to grow an Internet business internationally. Product Localization Dauchez says that customizing the service was key to entering new markets. Marketing Earning money from some of the social networks may be tricky. Payment.

How to Write an Elevator Pitch. If you're like most entrepreneurs, you think an "elevator pitch" is a one- to three-minute sales pitch that you could presumably give during a very long elevator ride. 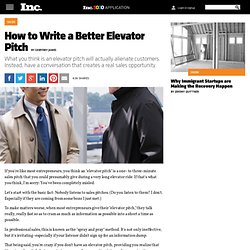 If that's what you think, I'm sorry: You've been completely misled. Retail and Online Store Business Plans. PitchBig launches gamified matchmaking service for startups and investors. PitchBig hopes to be a startup’s new best friend and the next greatest networking site for finding venture capital. 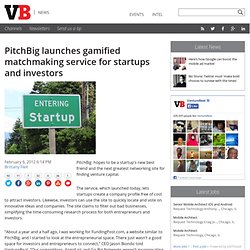 The service, which launched today, lets startups create a company profile free of cost to attract investors. Likewise, investors can use the site to quickly locate and vote on innovative ideas and companies. The site claims to filter out bad businesses, simplifying the time-consuming research process for both entrepreneurs and investors. “About a year and a half ago, I was working for FundingPost.com, a website similar to PitchBig, and I started to look at the entrepreneurial space. There just wasn’t a good space for investors and entrepreneurs to connect,” CEO Jason Biondo told VentureBeat.

The Pitch Score ranking algorithm combines user votes, company recommendations, and generated fan interest to rate a business on its potential success. PitchBig is a small bootstrapped company operating out of Hartford, Connecticut. Image via dierken/Flickr. Riley Gibson: How Being Uncomfortable Can Be Your Best Creative Weapon. Would it shock you if I told you that we’re ignoring our greatest creative resource every single day--even stifling it? 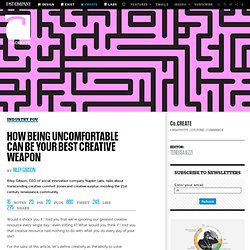 What would you think if I told you that creative resource had nothing to do with what you do every day of your life? For the sake of this article, let’s define creativity as the ability to solve problems in an unexpected or surprising way. Many of us may be in careers that are perceived as “creative": designers, developers, writers, or entrepreneurs. But we don’t force ourselves regularly to solve problems that are clearly out of our areas of expertise. That’s where we’re squandering our greatest creative resource. This concept has been called a lot of things, but one of my favorites is “the curse of knowledge.” So, how do we get out of our own way? The Only Way to Become a Business Rock Star. Some business people are like rock stars: Richard, Warren, Bill, the late Steve—all rock stars. 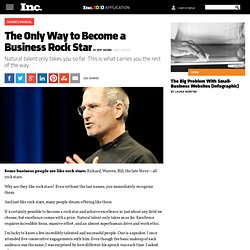 Why are they like rock stars? Even without the last names, you immediately recognize them. And just like rock stars, many people dream of being like them. It’s certainly possible to become a rock star and achieve excellence in just about any field we choose, but excellence comes with a price. Natural talent only takes us so far. Y Combinator. Ron Conway is a Silicon Valley startup's best friend.

The prolific angel investor has rarely met an Internet startup he didn't like.

When it comes to picking the next big thing, there's a right way and a wrong way. And then there's the Conway. Ron Conway, with Coco, his rescue dog, photographed at their San Francisco home FORTUNE -- The rooftop deck of Ron Conway's San Francisco apartment building is packed with a random and seemingly incongruous assortment of tech A-listers, celebrities, and sports stars snacking on hors d'oeuvres and sipping fine wines.

Conway, Silicon Valley's most prolific startup investor, has graciously opened his tony Pacific Heights pad, which has sweeping views of the Golden Gate, to let about 150 of his closest friends get a good look at the Blue Angels, the U.S. During the October party, Conway buttonholes a number of his guests to help with his latest project: a music video to promote the election campaign of Ed Lee, San Francisco's tech-friendly mayor. Ron Conway's firm, SV Angel, is a lean operation. Corporations Are Startups Too. What is Lean Startup? 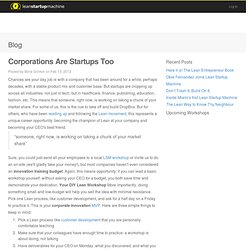 “Lean Startup” is a term coined by Eric Ries while an Advisor to the venture capital firm Kleiner Perkins. It’s based on the new management processes he employed while Chief Technology Officer at IMVU, one of Silicon Valley’s most successful startups. What is Customer Development? “Customer Development” is a process pioneered by Steve Blank and written about extensively in Four Steps to the Epiphany. It emphasizes “Getting Out of the Building” for in-person feedback and focusing early product development efforts around early-evangelists.