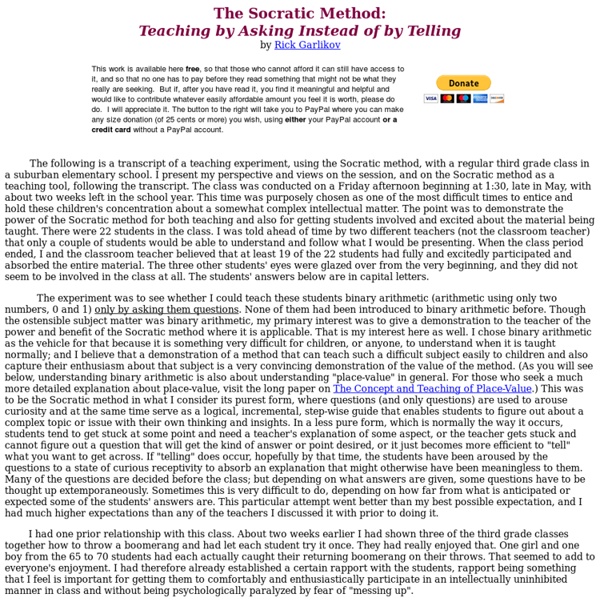 The Socratic Method:Teaching by Asking Instead of by Tellingby Rick Garlikov The following is a transcript of a teaching experiment, using the Socratic method, with a regular third grade class in a suburban elementary school. I present my perspective and views on the session, and on the Socratic method as a teaching tool, following the transcript. The class was conducted on a Friday afternoon beginning at 1:30, late in May, with about two weeks left in the school year. This time was purposely chosen as one of the most difficult times to entice and hold these children's concentration about a somewhat complex intellectual matter. The point was to demonstrate the power of the Socratic method for both teaching and also for getting students involved and excited about the material being taught. The experiment was to see whether I could teach these students binary arithmetic (arithmetic using only two numbers, 0 and 1) only by asking them questions. 1) "How many is this?" 4) Another way?

The Role of Questions in Teaching, Thinking and Le One of the reasons that instructors tend to overemphasize "coverage" over "engaged thinking" is that they assume that answers can be taught separate from questions. Indeed, so buried are questions in established instruction that the fact that all assertions — all statements that this or that is so — are implicit answers to questions is virtually never recognized. For example, the statement that water boils at 100 degrees centigrade is an answer to the question "At what temperature centigrade does water boil?" Hence every declarative statement in the textbook is an answer to a question.

'Askers' vs. 'Guessers' - National Let's say your husband or wife has a friend who will be coming to your city for two weeks on business. This friend writes to you and your spouse, asking if you can put him up while he's in town. Has this person committed a gross violation of etiquette? Whether you answer yes or no may speak to whether you're an Asker or a Guesser--the two personality types described in a three-year-old Web comment that has lately taken on a second life as a full-on blog meme. On January 16, 2007, Andrea Donderi responded to an Ask MetaFilter post that dealt with a houseguest-related situation like the one described above. Donderi's take on the situation is as elegant as it is provocative. Calvin and Hobbes - Stars and Infinity (Comic Strip) Karma Jello Cannabis, Psychedelics, Comedians, Astronomy, Philosophy, Photography, Art, MMA Karma Jello » Universe » Astronomy » Calvin and Hobbes – Stars and Infinity (Comic Strip) Calvin and Hobbes – Stars and Infinity (Comic Strip) POSTED BY CARLOS PIMENTEL | Astronomy, Philosophy Share on facebookShare on twitterShare on pinterest_shareShare on stumbleuponShare on google_plusone_shareShare on emailMore Sharing Services

Wisdom & Quotes by Confucius » Wisdom of the Ancient Sages « Articles & Wisdom Confucius 551-479 BC Chinese Philosopher Famous Quotes "When we see men of worth, we should think of equaling them; when we see men of a contrary character, we should turn inwards and examine ourselves." "Things that are done, it is needless to speak about... things that are past, it is needless to blame."

Here’s What Will Truly Change Higher Education: Online Degrees That Are Seen as Official Photo Three years ago, technology was going to transform higher education. What happened? Over the course of a few months in early 2012, leading scientists from Harvard, Stanford and M.I.T. started three companies to provide Massive Open Online Courses, or MOOCs, to anyone in the world with an Internet connection. The courses were free. Millions of students signed up. Chomsky Is Citation Champ Many are the authors who may wonder if anyone is paying attention to what they write. Professor Noam Chomsky, MIT's preeminent linguistics authority, doesn't have that problem. Recent research on citations in three different citation indices show that Professor Chomsky is one of the most cited individuals in works published in the past 20 years. In fact, his 3,874 citations in the Arts and Humanities Citation Index between 1980 and 1992 make him the most cited living person in that period and the eighth most cited source overrall--just behind famed psychiatrist Sigmund Freud and just ahead of philosopher Georg Hegel.

Many, Many Examples Of Essential Questions Many, Many Examples Of Essential Questions by Terry Heick Essential questions are, ask Grant Wiggins defines, “‘essential’ in the sense of signaling genuine, important and necessarily-ongoing inquiries.” Page Title 1. A rat can last longer without water than a camel. 2. Your stomach has to produce a new layer of mucus every two weeks or it will digest itself.

Positivism Positivism is the philosophy of science that information derived from logical and mathematical treatments and reports of sensory experience is the exclusive source of all authoritative knowledge,[1] and that there is valid knowledge (truth) only in this derived knowledge.[2] Verified data received from the senses are known as empirical evidence.[1] Positivism holds that society, like the physical world, operates according to general laws. Introspective and intuitive knowledge is rejected, as is metaphysics and theology. Although the positivist approach has been a recurrent theme in the history of western thought,[3] the modern sense of the approach was developed by the philosopher Auguste Comte in the early 19th century.[4] Comte argued that, much as the physical world operates according to gravity and other absolute laws, so does society.[5] Etymology[edit] Overview[edit] Antecedents[edit]

Assessing What Your Students Know, Want to Know, and Learned Measuring student success is a top priority to ensure the best possible student outcomes. Through the years instructors have implemented new and creative strategies to assess student learning in both traditional and online higher education classrooms. Assessments can range from formative assessments, which monitor student learning with quick, efficient, and frequent checks on learning; to summative assessments, which evaluate student learning with “high stakes” exams, projects, and papers at the end of a unit or term. Noam Chomsky Avram Noam Chomsky (born December 7, 1928) is an American linguist, philosopher, political activist, author, and lecturer. He is an Institute Professor and professor emeritus of linguistics at the Massachusetts Institute of Technology. Linguistics[change | edit source]

Crafting Questions That Drive Projects Which comes first, the driving question or the learning goals? I think it depends. The most successful projects feed off of students’ passions. Don’t be afraid to tap into them. Take what they are interested in and find a way to connect that interest to learning standards. In my first year of teaching, my fifth graders were obsessed with SpongeBob Squarepants.