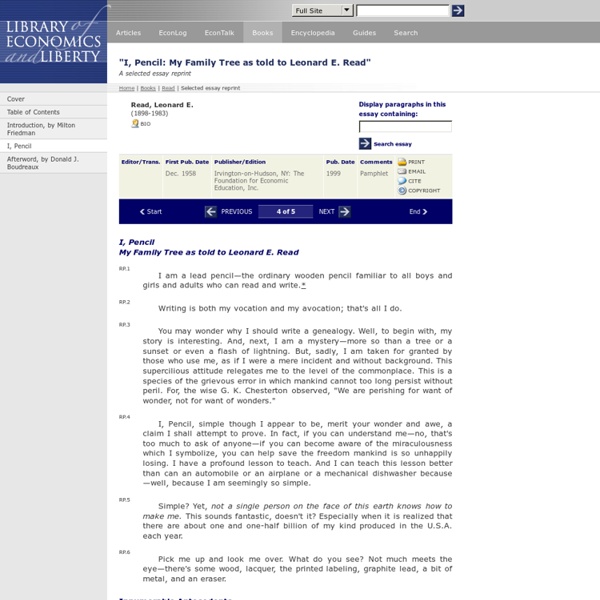 I, Pencil My Family Tree as told to Leonard E. Read I am a lead pencil—the ordinary wooden pencil familiar to all boys and girls and adults who can read and write Writing is both my vocation and my avocation; that's all I do. You may wonder why I should write a genealogy. I, Pencil, simple though I appear to be, merit your wonder and awe, a claim I shall attempt to prove. Simple? Pick me up and look me over. Innumerable Antecedents Just as you cannot trace your family tree back very far, so is it impossible for me to name and explain all my antecedents. My family tree begins with what in fact is a tree, a cedar of straight grain that grows in Northern California and Oregon. The logs are shipped to a mill in San Leandro, California. Consider the millwork in San Leandro. Don't overlook the ancestors present and distant who have a hand in transporting sixty carloads of slats across the nation. My "lead" itself—it contains no lead at all—is complex. My cedar receives six coats of lacquer. Related:  The Extended Essay (IB DP) • Random Interestingness • Other art stuff

IB Extended Essay Supports Success at U Va. Newswise — As part of a study conducted by University of Virginia (U Va.) researchers, a group of 1,045 International Baccalaureate Diploma Programme alumni—all U Va. undergraduates—participated in a research project that sought to gain understanding about how students’ research activity in the IB Diploma Programme contributed to their U Va. research experiences and outcomes. In particular, the research study focused on how the Diploma Programme’s extended essay requirement may have contributed to the students’ research success as U Va. students, and how their extended essay scores and university GPAs may correlate. The study, “Exploring the Benefits of the International Baccalaureate Extended Essay for University Study at the University of Virginia,” was conducted by Karen K. Inkelas, Amy Swan, Joshua Pretlow and Jill Jones, all of U Va.’s Center for Advanced Study of Teaching and Learning in Higher Education. Comment/Share

Researchers Develop Technique to Remotely Control Cockroaches Remote control cockroach cyborgs Researchers from North Carolina State University have developed a technique that uses an electronic interface to remotely control, or steer, cockroaches. “Our aim was to determine whether we could create a wireless biological interface with cockroaches, which are robust and able to infiltrate small spaces,” says Alper Bozkurt, an assistant professor of electrical engineering at NC State and co-author of a paper on the work. “Ultimately, we think this will allow us to create a mobile web of smart sensors that uses cockroaches to collect and transmit information, such as finding survivors in a building that’s been destroyed by an earthquake. “Building small-scale robots that can perform in such uncertain, dynamic conditions is enormously difficult,” Bozkurt says. “We decided to use biobotic cockroaches in place of robots, as designing robots at that scale is very challenging and cockroaches are experts at performing in such a hostile environment.”

Robots This lesson plan may be used to address the academic standards listed below. These standards are drawn from Content Knowledge: A Compendium of Standards and Benchmarks for K-12 Education: 2nd Edition and have been provided courtesy of theMid-continent Research for Education and Learningin Aurora, Colorado. Grade level:6-8Subject area:technologyStandard: Understands the relationships among science, technology, society, and the individual.Benchmarks:Benchmark 1: Knows ways in which technology has influenced the course of history (e.g., revolutions in agriculture, manufacturing, sanitation, medicine, warfare, transportation, information processing, communication). Benchmark 3: Knows examples of advanced and emerging technologies (e.g., virtual environment, personal digital assistants, voice recognition software) and how they could impact society. Benchmark 4: Knows that science cannot answer all questions and technology cannot solve all human problems or meet all human needs.

Martin Luther King Christmas Sermon on Peace Martin Luther King Dr. King first delivered this sermon at Ebenezer Baptist Church, where he served as co-pastor. On Christmas Eve, 1967, the Canadian Broadcasting Corporation aired this sermon as part of the seventh annual Massey Lectures. Peace on Earth... This Christmas season finds us a rather bewildered human race. We have experimented with the meaning of nonviolence in our struggle for racial justice in the United States, but now the time has come for man to experiment with nonviolence in all areas of human conflict, and that means nonviolence on an international scale. Now let me suggest first that if we are to have peace on earth, our loyalties must become ecumenical rather than sectional. Yes, as nations and individuals, we are interdependent. It really boils down to this: that all life is interrelated. Now let me say, secondly, that if we are to have peace in the world, men and nations must embrace the nonviolent affirmation that ends and means must cohere.

women in electroacoustic, minimalism, tape music, musique concrète, free improvisation, and related genres Johanna Beyer I'm placing Beyer at the top slot intentionally, I cannot overstate her importance to the role of women in electronic, electroacoustic, minimalism, and related genres. Often cited as the first female electronic musician (due to her work scoring "Music of the Spheres" in 1938), Johanna Beyer was one of the most forward thinking composers of the 30s. Throughout her work, Beyer exemplified some of the earliest use of a pitch based approach to rhythmic processes, made use of technically challenging tone clusters, and made distinguished use of processed percussion ensembles in her compositions. Her work has been revisited and performed by both Aaron Copland and John Cage.

Simon Rich: “Unprotected” I born in factory. They put me in wrapper. They seal me in box. In early days, they move us around. One day in store, boy human sees us on shelf. He goes to house, runs into bedroom, locks door. I stay in wallet long, long time. This is story of my life inside wallet. The first friend I meet in wallet is Student I.D. In middle of wallet, there live dollars. I also meet photograph of girl human. When I first get to wallet, I am “new guy.” Soon after, I am taken out of wallet. A few days later, picture of girl human is gone. That summer, I meet two new friends. MetroCard is from New York City and he never lets you forget it. When MetroCard meets GameStop PowerUp Card Jordi Hirschfeld, he looks at me and says, No wonder Jordi Hirschfeld not yet use you. That night, MetroCard tells me many strange things about myself. It is around this time that we move. No more GameStop PowerUp Card Jordi Hirschfeld. I am angry. A few days later, I meet Film Forum Membership Jordan Hirschfeld. I am confused.

25 (Free) 3D Modeling Applications You Should Not Miss 3D-modeling tools help turn individual ideas into beautiful models and prototypes for a variety of fields. These tools allow building and customizing models from the ground up, no matter if you are a keen beginner or a professional engineer. Popular in various industries such as film, animation, gaming, architecture, and interior design, 3D models are key aspects of various projects. Choosing the best modeling software is often difficult because of various aspects and the wide range of features available in these tools. Read more: 25 Websites to Download 3D Printer STL Models Wings 3D Wings 3D is an advanced sub-division modeler which offers a wide range of modeling tools and a customizable interface, along with a built-in AutoUV mapping tool, as well as export facility for common 3D formats. Supported Platforms: Windows | macOS | Linux [Download here] Daz Studio Supported Platforms: Windows | macOS [Download here] Open SCAD Supported Platforms: Windows | macOS | Linux | BSD [Download here]

xkcd on how many Twitters are possible 888,246 Ceramic Poppies Flow Like Blood from the Tower of London to Commemorate WWI Historic Royal Palaces To commemorate the centennial of Britain’s involvement in the First World War, ceramic artist Paul Cummins and stage designer Tom Piper conceived of a staggering installation of ceramic poppies planted in the famous dry moat around the Tower of London. Titled “Blood Swept Lands and Seas of Red,” the final work will consist of 888,246 red ceramic flowers—each representing a British or Colonial military fatality—that flow through grounds around the tower. Volunteers began placing the poppies several weeks ago and the process will continue through the summer until a final flower is symbolically planted on November 11th. Massimo Usai Historic Royal Palaces / Massimo Usai

How Brainless Slime Molds Redefine Intelligence [Video] Gardeners sometimes encounter them in their backyards—spongy yellow masses squatting in the dirt or slowly swallowing wood chips. Hikers often spot them clinging to the sides of rotting logs like spilled bowls of extra cheesy macaroni. In Mexico some people reportedly scrape their tender bodies from trees and rocks and scramble them like eggs. Something scientists have come to understand is that slime molds are much smarter than they look. This video was produced through a collaboration between NOVA and Scientific American. In the wild, P. polycephalum rummages through leaf litter and oozes along logs searching for the bacteria, fungal spores and other microbes that it envelops and digests à la the amorphous alien in the 1958 horror film The Blob. In the early 2000s Toshiyuki Nakagaki, then at Hokkaido University in Japan, and his colleagues chopped up a single polycephalum and scattered the pieces throughout a plastic maze.