Atomic Structure Timeline. Bohr model. 'Rutherford–Bohr model' and 'Bohr–Rutherford diagram' redirect to this page. 'Bohr model' is not to be confused with Bohr equation. 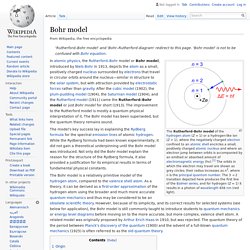 The Rutherford–Bohr model of the hydrogen atom (Z = 1) or a hydrogen-like ion (Z > 1), where the negatively charged electron confined to an atomic shell encircles a small, positively charged atomic nucleus and where an electron jump between orbits is accompanied by an emitted or absorbed amount of electromagnetic energy (hν).[1] The orbits in which the electron may travel are shown as grey circles; their radius increases as n2, where n is the principal quantum number. History Archive. Hantaro Nagaoka. Relief of Nagaoka in Science Museum in Tokyo Hantaro Nagaoka (長岡 半太郎, Nagaoka Hantarō? 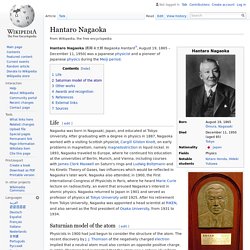 , August 19, 1865 – December 11, 1950) was a Japanese physicist and a pioneer of Japanese physics during the Meiji period. Life[edit] Nagaoka was born in Nagasaki, Japan, and educated at Tokyo University. After graduating with a degree in physics in 1887, Nagaoka worked with a visiting Scottish physicist, Cargill Gilston Knott, on early problems in magnetism, namely magnetostriction in liquid nickel. Atomic orbital. Mathematical function that describes the wave-like behavior of either one electron or a pair of electrons in an atom The shapes of the first five atomic orbitals are: 1s, 2s, 2px, 2py, and 2pz. 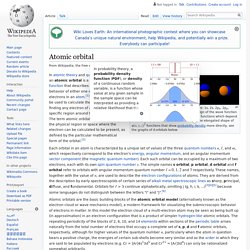 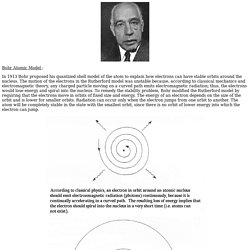 PhysicsLAB: Famous Experiments: The Discovery of the Neutron. In 1920, Ernest Rutherford postulated that there were neutral, massive particles in the nucleus of atoms. 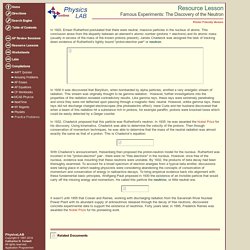 This conclusion arose from the disparity between an element's atomic number (protons = electrons) and its atomic mass (usually in excess of the mass of the known protons present). James Chadwick was assigned the task of tracking down evidence of Rutherford's tightly bound "proton-electron pair" or neutron. In 1930 it was discovered that Beryllium, when bombarded by alpha particles, emitted a very energetic stream of radiation. 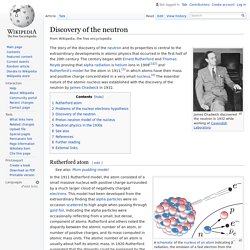 The century began with Ernest Rutherford and Thomas Royds proving that alpha radiation is helium ions in 1908[1][2] and Rutherford's model for the atom in 1911,[3] in which atoms have their mass and positive charge concentrated in a very small nucleus.[4] The essential nature of the atomic nucleus was established with the discovery of the neutron by James Chadwick in 1932. Rutherford atom[edit] A schematic of the nucleus of an atom indicating β− radiation, the emission of a fast electron from the nucleus (the accompanying antineutrino is omitted). In the Rutherford model for the nucleus, red spheres were protons with positive charge and blue spheres were protons tightly bound to an electron with no net charge.

There were other motivations for the proton–electron model. Proton. A proton is a subatomic particle, symbol p or p+, with a positive electric charge of +1e elementary charge and a mass slightly less than that of a neutron. Protons and neutrons, each with masses of approximately one atomic mass unit, are collectively referred to as "nucleons". Antonius van den Broek. Antonius Van den Broek (1870-1926), the lawyer and amateur physicist who first suggested that the number of charges in an element's atomic nucleus is exactly equal to the element's place on Mendeleev's periodic table. 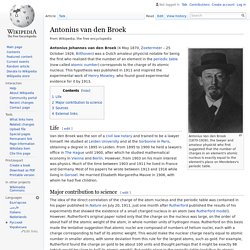 Antonius Johannes van den Broek (4 May 1870, Zoetermeer – 25 October 1926, Bilthoven) was a Dutch amateur physicist notable for being the first who realized that the number of an element in the periodic table (now called atomic number) corresponds to the charge of its atomic nucleus. This hypothesis was published in 1911 and inspired the experimental work of Henry Moseley, who found good experimental evidence for it by 1913.

Life[edit] Van den Broek was the son of a civil law notary and trained to be a lawyer himself. He studied at Leiden University and at the Sorbonne in Paris, obtaining a degree in 1895 in Leiden. Major contribution to science[edit] Henry Moseley, in his paper on atomic number and X-ray emission, mentions only the models of Rutherford and Van den Broek. H. Development of the Atomic Theory. Modern Atomic Theory: Models. 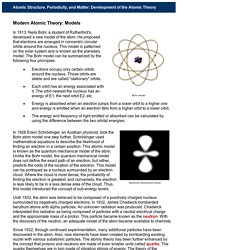 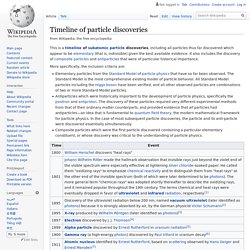 It also includes the discovery of composite particles and antiparticles that were of particular historical importance. More specifically, the inclusion criteria are: Proton. Untitled. 400 B.C. 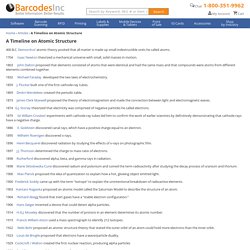 Democritus’ atomic theory posited that all matter is made up small indestructible units he called atoms. 1704 Isaac Newton theorized a mechanical universe with small, solid masses in motion. 1803 John Dalton proposed that elements consisted of atoms that were identical and had the same mass and that compounds were atoms from different elements combined together. 1832 Michael Faraday developed the two laws of electrochemistry. 1859 J. 1869 Dmitri Mendeleev created the periodic table. 1873 James Clerk Maxwell proposed the theory of electromagnetism and made the connection between light and electromagnetic waves. 1874 G.J. 1879 Sir William Crookes’ experiments with cathode-ray tubes led him to confirm the work of earlier scientists by definitively demonstrating that cathode-rays have a negative charge. 1886 E. 1895 Wilhelm Roentgen discovered x-rays. 1896 Henri Becquerel discovered radiation by studying the effects of x-rays on photographic film. 1897 J.J. 1914 H.G.J.