17HarvHumRtsJ249(2004).pdf. Human Rights and Empire: The Political Philosophy of Cosmopolitanism - Costas Douzinas. Security and Human Rights. Human Rights and Terrorism, Counter-Terrorism and National Security Amnesty International insists that states must respect human rights in any actions they take in the name of national security or countering terrorism. 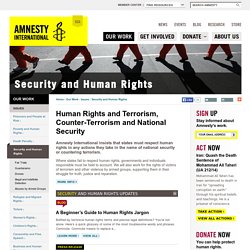 Where states fail to respect human rights, governments and individuals responsible must be held to account. We will also work for the rights of victims of terrorism and other violence by armed groups, supporting them in their struggle for truth, justice and reparation. More info Unlawful detention. FindLaw: 9-11 Commission / National Commission on Terrorist Attacks Upon the United States. They Tried to Warn Us: Foreign Intelligence Warnings Before 9/11. By Paul Thompson View the printer friendly view DISCLAIMER: The analytical articles published on this website were written and published by “project managers” of certain investigative projects hosted by the History Commons website. 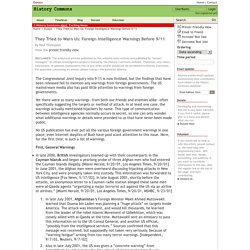 Therefore, any views, conclusions, or opinions expressed in this or any other article should not be attributed to History Commons. For questions concerning an article, please contact the author(s) directly. The Congressional Joint Inquiry into 9-11 is now finished, but the findings that have been released fail to mention any warnings from foreign governments. Yet there were so many warnings—from both our friends and enemies alike—often specifically suggesting the targets or method of attack. No US publication has ever put all the various foreign government warnings in one place; even Internet skeptics of Bush have paid scant attention to this issue. 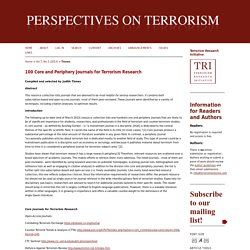 Do not call Charlie Hebdo killers 'terrorists', says head of BBC Arabic. The Islamists who committed the Charlie Hebdo massacre in Paris should be not be described as “terrorists” by the BBC, a senior executive at the corporation has said. 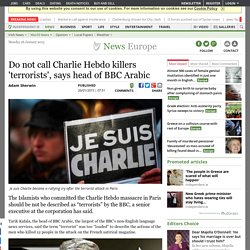 Tarik Kafala, the head of BBC Arabic, the largest of the BBC’s non-English language news services, said the term “terrorist” was too “loaded” to describe the actions of the men who killed 12 people in the attack on the French satirical magazine. Mr Kafala, whose BBC Arabic television, radio and online news services reach a weekly audience of 36 million people, told The Independent: “We try to avoid describing anyone as a terrorist or an act as being terrorist. What we try to do is to say that ‘two men killed 12 people in an attack on the office of a satirical magazine’. That’s enough, we know what that means and what it is.”

Mr Kafala said: “Terrorism is such a loaded word. Stereotyping terrorists: The usual suspects - Editorials & Commentary - International Herald Tribune. 10 reasons the U.S. is no longer the land of the free. Every year, the State Department issues reports on individual rights in other countries, monitoring the passage of restrictive laws and regulations around the world. 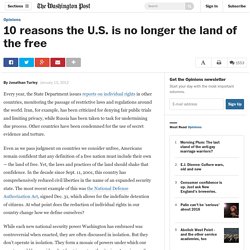 Iran, for example, has been criticized for denying fair public trials and limiting privacy, while Russia has been taken to task for undermining due process. Other countries have been condemned for the use of secret evidence and torture. Even as we pass judgment on countries we consider unfree, Americans remain confident that any definition of a free nation must include their own — the land of free. Yet, the laws and practices of the land should shake that confidence.

In the decade since Sept. 11, 2001, this country has comprehensively reduced civil liberties in the name of an expanded security state. While each new national security power Washington has embraced was controversial when enacted, they are often discussed in isolation. These countries also have constitutions that purport to guarantee freedoms and rights. 'Neither liberty nor safety': Has American freedom’s race been run at Boston Marathon? — RT Op-Edge. Published time: April 16, 2013 12:49 Members of the U.S. 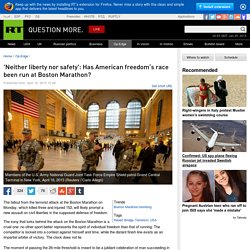 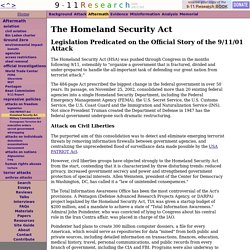 " The 484-page Act prescribed the biggest change in the federal government in over 50 years. Its passage, on November 25, 2002, consolidated more than 20 existing federal agencies into a single Homeland Security Department, including the Federal Emergency Management Agency (FEMA), the U.S. Secret Service, the U.S. Overview of terrorism legislation.

There are over five Acts of Parliament and numerous regulations, rules and Orders which provide for special counter-terrorism powers and offences. 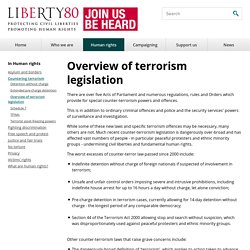 This is in addition to ordinary criminal offences and police and the security services' powers of surveillance and investigation. While some of these new laws and specific terrorism offences may be necessary, many others are not. Sign in. Blank project log book. Anti-terrorism legislation. Anti-terrorism legislation designs various types of laws passed in the aim of fighting terrorism. 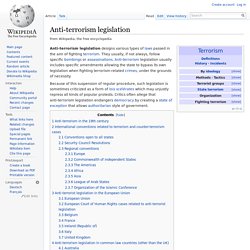 They usually, if not always, follow specific bombings or assassinations. Terrorism: What have schools done? - News - Special Coverage. NEW YORK, July 16, 2002 — More than 8,000 students were evacuated from schools near the World Trade Center on Sept. 11, and scenes of parents rushing through the chaos to retrieve their children shook up moms and dads everywhere. 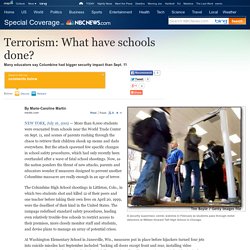 But the attack spawned few specific changes in school safety procedures, which had only recently been overhauled after a wave of fatal school shootings. Definition of terrorism.