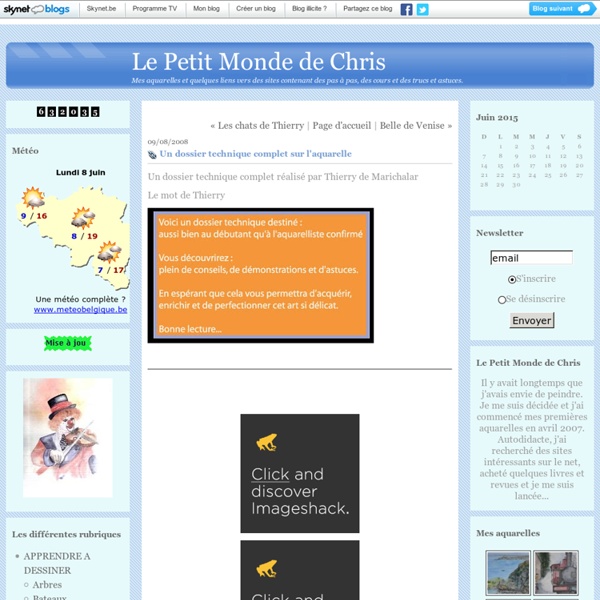 PATRONS Examples of this and alternative method here I draw string a lot so it's all over the blog. See also here and here. ("Well" is an official Zentangle pattern - this is just my spin on it) See an example of Morning Glories here See samples of bloom here Cell phone charging cradle My husband and I both have cell phones. And both of us have phone chargers. And that means lots of obnoxious cords. The Watercolor Teacher We have all hit days when the well seems to be dry, and the dry rut we feel we are in just got deeper. How do you get the fire back? How do you open the dam and let the creative waters flow again? Dwelling on the paucity of ideas and lamenting your lack of talent (whatever that is) is not the answer. Some artist wanna-be’s just say, “I’m not in the mood today, the muses have not touched me this morning.

What is Consciousness? We become consciousness when there is an awareness of movement, balance and clarity in the relationships between all these directions, giving rise to the experience of presence and an awareness of the core Self, which is whole. Life is experienced as a field of awareness and our relationships become interactions with consciousness within those fields. Modern quantum physicists are now demonstrating the truth of this ancient wisdom as they delve ever deeper into the mystery of how life is created. The relationship of the creative expression of our essence in co-creation with the Divine can be most fully be experienced through play, community, love, presence and an awareness of all Life.

Painted Rocks I've lately become quite enamored with, of all things, painted rocks.Who knew such innocuous objects could be transformed, with a little paint and imagination, into pieces of eye popping beauty. Makes me want to go out and gather some rocks and paints.....what a fun way to pass some time. formater études (normaliser) Tom’s Tutorials For Excel: Checkmarking a Cell With Standard and Conditional Formatting Here’s how you can automatically show a checkmark in a cell, using standard formatting for a font type, and Conditional Formatting to identify when the checkmark exists. There is no programming code involved; it’s all native Excel formatting. In this example based on the following picture, a company keeps an ongoing list of projects, with a set of tasks that each project might need to complete along the way in order to claim the entire project as being complete.

Fox Hollow Cottage: Glass Bottle and Tin Can Repurpose Tin Cans & Tequila Bottles Repurposing and Reusing {shabby style!} After I got drunk the other night… just Kidding!! hehehe Actually, I have been saving a bag full of tins cans for months now and I knew I needed to get my tail in gear and actually Woven Finger-Knitting Hula-Hoop Rug DIY Here we go! I’m so excited to kick off this series of finger-knitting projects. For the first project, B proffered his largest ball of finger-knitting for us all to try weaving a rug! Shadow (psychology) In Jungian psychology, the shadow or "shadow aspect" may refer to (1) an unconscious aspect of the personality which the conscious ego does not identify in itself. Because one tends to reject or remain ignorant of the least desirable aspects of one's personality, the shadow is largely negative, or (2) the entirety of the unconscious, i.e., everything of which a person is not fully conscious. There are, however, positive aspects which may also remain hidden in one's shadow (especially in people with low self-esteem).[1] Contrary to a Freudian definition of shadow, therefore, the Jungian shadow can include everything outside the light of consciousness, and may be positive or negative. "Everyone carries a shadow," Jung wrote, "and the less it is embodied in the individual's conscious life, the blacker and denser it is.

The Psychology of Flow: What Game Design Reveals about the Deliberate Tensions of Great Writing by Maria Popova “The books that give us the most pleasure, the deepest pleasure, combine uncertainty and satisfaction, tension and release.” A full creative life requires equally that we cultivate a capacity for boredom, as legendary psychoanalyst Adam Phillips asserted, and learn to welcome rather than avoid difficulty, as Nietzsche believed. Great stories, like great life-stories, are woven of the same interplay between fertile ennui and surmountable frustration — so argues writer Peter Turchi in one especially rewarding section of the altogether stimulating A Muse and a Maze: Writing as Puzzle, Mystery, and Magic (public library | IndieBound). In a sentiment that illuminates the psychological machinery behind Nabokov’s famous assertion that “a good reader, a major reader, an active and creative reader is a rereader,” Turchi recounts poet C. Dale Young’s experience of reading and rereading Joseph Conrad’s Heart of Darkness: