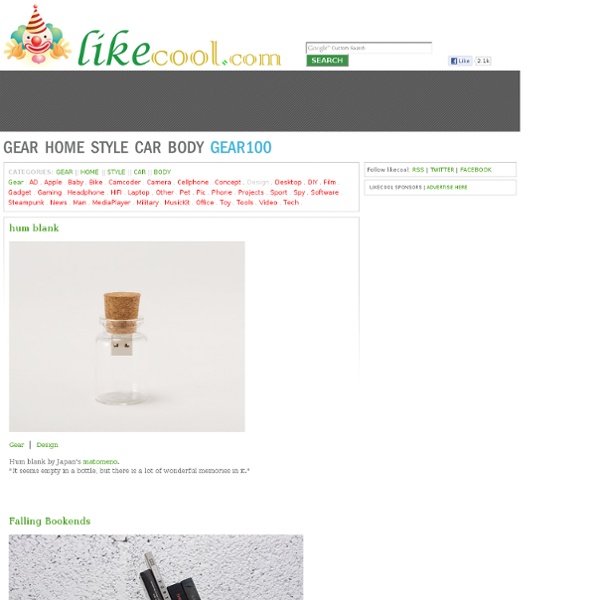 Tim Bouckley, Millie Clive-Smith, Mi Eun Kim and Yuta Sugawara, students from the Royal College of Art in London, have developed headsets that allow the wearer to adjust their sight and hearing in the same way they'd control the settings on a TV or radio (+ movie).The equipment, called Eidos, was developed to enhance sensory perception by tuning in to specific sounds or images amongst a barrage of sonic and visual information, then applying effects to enhance the important ones.

Science of Surviving the Zombie Apocalypse We love interesting research, especially since our language learning products are based on research by Paul Pimsleur. So we were excited when we saw that research in necroneurology identified several key features of zombie behavior. Below is the science of surviving the zombie apocalypse. Share it: All tongue-in-cheek. And a huge thanks to Bradley Voytek, Timothy Verstynen and the Zombie Research Society for the research and help with this infographic.

Eight great gadgets for college dorms It's almost time for college students to begin fall classes, so I thought it would be good to compile a list of gadgets for college dorms and apartments. The obvious ones, like smartphones, laptops, iPads and calculators aren't listed here because I went for the fun and unique gadgets instead. Take a look and let me know if you've found something cool that should be included. (Scroll to the bottom to see a video that demonstrates the gadgets.)

Scientists discover new species of blind snake in Brazilian river (and please stop sniggering at the back) By Eddie Wrenn Published: 15:46 GMT, 1 August 2012 | Updated: 19:05 GMT, 1 August 2012 Forgive us if this puts you off your dinner because, as snakes go, this is not much of a charmer. The Chip Bag Fold Learn this chip bag fold and you will never need a clamp ever again! Have you ever had a bag of unfinished potato chips which you want to keep fresh? These simple steps will allow you to close the potato chip bag without using a clip or clamp. An example of a silly (but undeniably useful) origami fold.

Hyper-Realistic Rubber: Tire Sculpture by Yong Ho Ji - Unfinished Man - StumbleUpon Whenever I take road trips, I often notice the hulking shreds of stripped semi tires laying around, and I’ve always thought two things: one, they look almost organic- like they’re actually the carcasses of some prehistoric animal that blundered its way onto the highway, and two- that that animal must have been damn ugly. But when I saw a tire sculpture by Yong Ho Ji the other day, I realized I was pretty wrong about the hideous part. He reassembles strips of old tires with resins and screws into gorgeous creatures with predatory stances and sinuous movement. We love our cars, so seeing tires re-purposed after their regular lifespan into perfect manly sculptures is totally bad ass. It’s the macho trifecta: hang one of these rubber animal busts on the wall, and you get the appearance of being an awesome trophy hunter without actually killing any animals, you’re saving the planet by recycling, and your sculpture isn’t some sissy flowers or soapstone carved by a three year old.

If the rest of this year's movie posters told the truth It's been far too long since our last movie poster TRUTH-BOMBING: here's a round-up of the remaining movies that have dodged our rapist rapier wit so far this year. Attention Stumblers! We have a new feature we think you'll like: If 2012's Oscar posters told the truth. In conclusion, I have far too much time on my hands. Attention Stumblers!

How to Make Your Own Seed Tape We managed to find a little time this weekend to make our own seed tape. My four-year-old walked into the office to find me with flour paste, a paint brush, and dozens of strips of newspaper. He was instantly intrigued. Human Useless Facts Men fart an average of 17 times a day, and women fart an average of 9 times a day. If you fart constantly for 6 years, 9 months and 23 days you would produce enough gas to explode an atomic bomb. The longest ever penis recorded by scientists is 13.5 inches. Humans are only second to cats for having the dirtiest mouths. It takes about 40 muscles to smile, but only 4 to pull the trigger of a decent rifle.

The Bitterroot Footage My name is Chad. I'm a student at a university in New York. I just moved to a studio apartment and needed some furniture. I found a guy on Craigslist that wanted to desperately get rid of his things at super cheap prices so I went to check it out. He sold things in bulk to get rid of as much things as possible. The Levitron Revolution: Magical Floating Device - Unfinished Man - StumbleUpon The Levitron Revolution is one of the sweetest gadgets to have around the house or office. The device features EZ Float Technology which allows you to float pretty much any object you can think of mid-air as long as it weighs no more than 12 ounces. You can even slowly rotate the object in the air with this cool device.