Q10_EE.pdf. Why did Zaarly pivot? - Quora. J. Chris Lonchampt. A guide to the obstacle-filled road from Kickstarter to Best Buy shelf. By Sean Lewin, Guest Contributor On March 13, 2015 [Editor’s note: This is a guest post by Sean Lewin, sales director for Pressy. 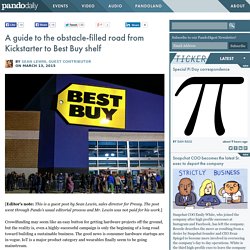 The post went through Pando’s usual editorial process and Mr. Lewin was not paid for his work.] Crowdfunding may seem like an easy button for getting hardware projects off the ground, but the reality is, even a highly-successful campaign is only the beginning of a long road toward building a sustainable business. The good news is consumer hardware startups are in vogue. Launching with a Kickstarter or similar campaign is about more than just funding. Oculus Rift and Pebble are the poster children of Kickstarter. The supporting hardware ecosystem continues to blossom with the maturation of crowdfunding, including several well-known hardware accelerators like Walk. But, even with the massive influx of capital flowing into consumer hardware, the list of crowdfunded products that make it onto your local retailer’s shelves is surprisingly short. Retail Gymnastics. Intel buys $25 million stake in Google Glass rival Vuzix.

Why Google wants to replace Gmail. I'm predicting that Google will end Gmail within the next five years. 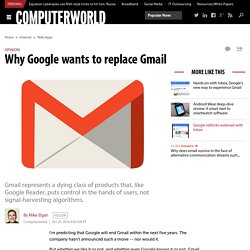 Proof of Existence. Lifeboat Foundation Bios: Charles Ostman. Organizational models of accidents. James Reason[edit] James Reason hypothesizes that most accidents can be traced to one or more of four levels of failure: Organizational influences, unsafe supervision, preconditions for unsafe acts, and the unsafe acts themselves. 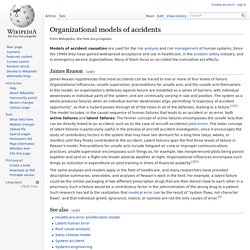 In this model, an organization's defences against failure are modelled as a series of barriers, with individual weaknesses in individual parts of the system, and are continually varying in size and position. Parkinson's law. UK First edition book cover. 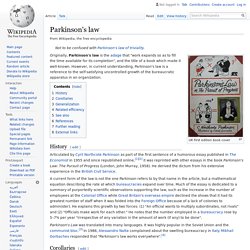 Intel acquiert une jeune pousse de l'EPFL. His Students Were Struggling, So He Changed 1 Big Thing. Then Everything Changed. After 12 years as principal of Clintondale High School, Greg Green had a bad feeling. 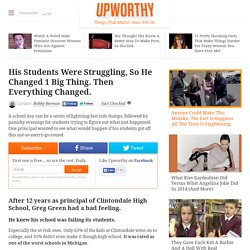 He knew his school was failing its students. Especially the at-risk ones. His Students Were Struggling, So He Changed 1 Big Thing. Then Everything Changed. New Study Destroys Malcolm Gladwell's 10,000 Rule. 10,000 Hours of Practice - WisdomGroup. In the book Outliers, author Malcolm Gladwell says that it takes roughly ten thousand hours of practice to achieve mastery in a field. 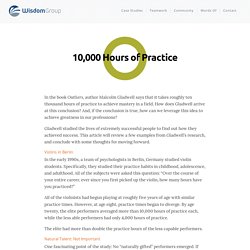 How does Gladwell arrive at this conclusion? And, if the conclusion is true, how can we leverage this idea to achieve greatness in our professions? Gladwell studied the lives of extremely successful people to find out how they achieved success. This article will review a few examples from Gladwell’s research, and conclude with some thoughts for moving forward. Violins in Berlin In the early 1990s, a team of psychologists in Berlin, Germany studied violin students. All of the violinists had begun playing at roughly five years of age with similar practice times. 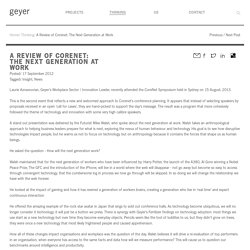 This is the second event that reflects a new and welcomed approach to Corenet's conference planning. It appears that instead of selecting speakers by proposals received in an open 'call for cases', they are hand-picked to support the day's message. The result was a program that more cohesively followed the theme of technology and innovation with some very high calibre speakers. A stand out presentation was delivered by the Futurist Mike Walsh, who spoke about the next generation at work. Walsh takes an anthropological approach to helping business leaders prepare for what is next, exploring the nexus of human behaviour and technology. He asked the question - How will the next generation work? Watson Developer Cloud. Transforming Diagnostic and Therapeutic Imaging with Devices, Deep Learning, and the Cloud. Introduction to Deep Learning with Python. The Grid.

Acheter une entrepreise – Vendre une entreprise. How Long Does it Take to Build a Technology Empire? Have you ever seen a business plan with hockey stick revenue projections? 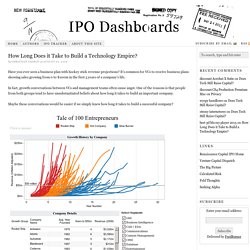 It’s common for VCs to receive business plans showing sales growing from 0 to $100m in the first 5 years of a company’s life. In fact, growth conversations between VCs and management teams often cause angst. Usermode filesystem for your Windows applications - Callback File System® (CBFS®) Present any data as virtual files and folders Create virtual device that emulates physical storage. 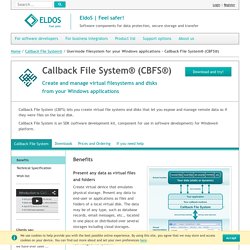 Present any data to end-user or applications as files and folders of a local virtual disk. The data may be of any type, such as database records, email messages, etc., located in one place or distributed over several storages including cloud storages. Charlie Shrem to Forfeit $950k to US Government in Plea Bargain. Further details have emerged of former BitInstant CEO Charlie Shrem's plea bargain with US authorities, which saw him plead guilty to aiding and abetting an unlicensed money-transmitting business on 4th Sept. 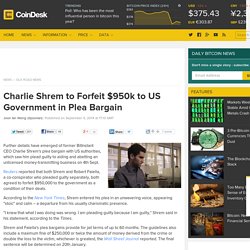 Reuters reported that both Shrem and Robert Faiella, a co-conspirator who pleaded guilty separately, both agreed to forfeit $950,000 to the government as a condition of their deals. According to the New York Times, Shrem entered his plea in an unwavering voice, appearing "stoic" and calm – a departure from his usually charismatic presence. "I knew that what I was doing was wrong. I am pleading guilty because I am guilty," Shrem said in his statement, according to the Times.

Shrem and Faiella's plea bargains provide for jail terms of up to 60 months. Intel and Fossil to create wearable tech. Use Google's "70-20-10 Model" To Manage Your Career. The future of work is changing, and only those who adapt will survive. The trends that define this new era of work are entrepreneurialism, flexibility and innovation. Kyle Westaway, a Harvard lecturer, attorney and thought leader, outlined these ideas succinctly in a PowerPoint presentation, which he shared in Las Vegas at Tony Hsieh's inaugural Speakers' Series.

(Hsieh, who is CEO of Zappos, is investing $350 million to transform Vegas; a cornerstone of his initiative is bringing in creative minds from around the country to share their ideas.) In his presentation, Westaway included a chart inspired by Google's 70-20-10 model for innovation. He says everyone should use this chart as a career roadmap, devoting 70 percent of their time to their core competency, 20 percent on related projects, and 10 percent to learning new skills and working on side projects. CEO Larry Page Considers Google 'A Teenager' RANDI LYNN BEACH / AP ImagesA young Larry Page and Sergey Brin Google founder and CEO Larry Page considers the company a teenager, but he want to make sure that it stays innovative even as it creeps into adulthood. To make sure this happens, he has decided to take a step back to focus on "the bigger picture," while putting Sundar Pichai in charge of Google's core products, according to an internal memo first reported by Re/Code .

“As you age, even when you’re still a teenager like Google, you have to work hard to stay innovative," Page wrote, according to The Wall Street Journal, which ran parts of the memo. "Innovation is messy, a disruptive process, and people tend to be more comfortable doing what they’ve always done with a few minor tweaks. … So I’m making … changes today to ensure we continue to strive for market-leading excellence and beyond in our existing already hugely successful products while also getting the next generation of big bets off the ground.

" Why We Should Still Practice the “70-20-10″ Rule. We all need a viable strategy to reach our potential — but it’s unlikely that we have “invested” in a firm plan to do so. As such, implementing a guiding philosophy to remain on the “cutting edge” would be a clear step in the right direction. (Random resolutions are problematical at best.) We need to ensure that opportunities for an innovative path are built into our work lives. Business Models. Advice from a CTO and Entrepreneur. (11) My tech co-founder "to be" wants 2 years vesting and a board seat. Should I go ahead with him? What does a startup CTO actually do? Start-Up Titles are Dangerous. I got a few questions about titles after my last post on hiring. Titles are always tricky, but particularly dangerous in the startup environment. I am not just talking about the rapidly de-valuing titles such as “Founder” (you aren’t one until you have actually created an entity and business), “CEO” (you aren’t one until you actually have responsible for employees and shareholders in a legal entity), and “Entrepreneur” (you aren’t one until you have taken substantial personal risk in the context of a business).

It’s the much more pedestrian titles that create equal if not bigger problems (e.g. “Engineer”, “Manager”, “Director”, Vice President”, “CxO”, etc.). Why Financial and Business Knowledge Matters in IT. Frank Wegner is a Physicist and IT industry veteran with over 18 years of experience in software development, IT architecture, project management, and consulting, and mentoring. He joined VMware in 2006 as Technical Account Manager helping large customers transforming their IT into a more agile and cost efficient IT service delivery. A key element of this work is to link business needs to IT architectures, and helping customers using advanced concepts like software defined datacenter elements to drive the business value.

The Mind of the Entrepreneur. When Reed Hastings went to return a movie to his local video store in 1997, he met with a rude awakening: a late fee of $40, more than the cost of purchasing the movie itself. The Mind of the Entrepreneur. Organic PC. Make Your Android Phone Simpler To Use With Aviate. One of the good things about Android, is that you can make it look very different with homescreens. I’ve always been on Unix/Linux on my desktops and laptops so Android just came naturally, as did the urge to fiddle with it.

The OS itself when possible, but at the very least every screen and setting got poked around, experimented with. Pricing - Time Savings Pay for Themselves - Logged In. Automatic dependent surveillance-broadcast. Joi Ito: Want to innovate? Become a "now-ist". Best SmartGlasses 2014 (Gadgets of the Future are here) 'Smart Glasses' offer help to near-blind people.