FastCompany.com - Where ideas and people meet. Business - Start a Startup. Ready to turn your ideas into a reality? The "Start a Startup" IntentPage provides the ins and outs of what is involved in Starting your own Startup Company, from idea conception to building your team, to raising money. To Start or Not www.bothsidesofthetable.com This is part of my Startup Advice series I often have career discussions with entrepreneurs - both young and more mature - whether they should join company Added on 9/1/2011 Funding www.avc.com I've got two basic rules of thumb.

Added on 7/8/2011 Team This post originally appeared on TechCrunch. Added on 5/28/2011 cdixon.org Note that we think of the VP Engineering role (as opposed to the CTO) as the person who makes software that gets built on schedule, on budget, in a reliable, scalable way etc. Added on 5/24/2011. Venture Hacks - Good advice for startups. Everything you ever wanted to know about advisors, Part 1. Nivi · January 31st, 2008 Here are answers to some frequently asked questions about advisors. 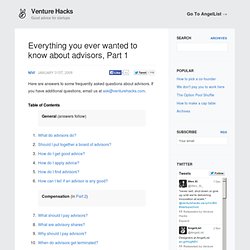 If you have additional questions, email us at ask@venturehacks.com. Table of Contents General (answers follow)

Funding. Daniel R. Odio - Hardcore LifeHacker Entrepreneur in Silicon Valley. This is the first of a multi-part blog post I'll be writing over the next week that will chronicle my experience raising a $1MM round for AppMakr. 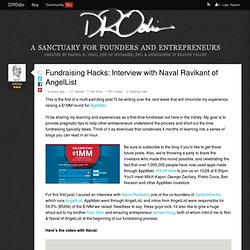 I'll be sharing my learning and experiences as a first-time fundraiser out here in the Valley. My goal is to provide pragmatic tips to help other entrepreneurs understand the process and short-cut the time fundraising typically takes. Kickstarter. Internet StartUp. Lean Investing by Dave McClure.

Website: Wilson Sonsini Goodrich & Rosati - Term Sheet Generator. This tool will generate a venture financing term sheet based on your responses to an online questionnaire. 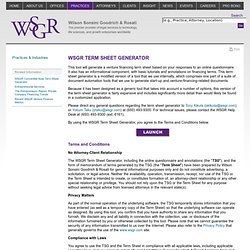 It also has an informational component, with basic tutorials and annotations on financing terms. This term sheet generator is a modified version of a tool that we use internally, which comprises one part of a suite of document automation tools that we use to generate start-up and venture-financing-related documents. Because it has been designed as a generic tool that takes into account a number of options, this version of the term sheet generator is fairly expansive and includes significantly more detail than would likely be found in a customized application. Please direct any general questions regarding the term sheet generator to Tony Kikuta (akikuta@wsgr.com) or Yokum Taku (ytaku@wsgr.com) at (650) 493-9300. For technical issues, please contact the WSGR Help Desk at By using the WSGR Term Sheet Generator, you agree to the Terms and Conditions below. Venture Deal Terms Studies Hint Worst Is Over - Venture Capital Dispatch.

ByScott Austin Two Silicon Valley law firms, Cooley Godward Kronish and Fenwick & West, are out this week with reports analyzing the terms of venture financings in the fourth quarter. 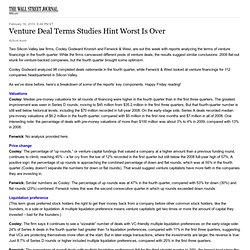 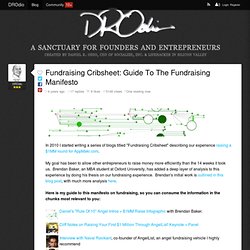 CRV is very well known out here in Silicon Valley, as is George, who's been in the business for 15+ years. Previously, I interviewed Naval Ravikant of AngelList, and interviewed Shai Goldman of Silicon Valley Bank, and I participated on a panel about the differences raising an angel round vs. a Series A round. GeorgeKellerman/angels-and-vcs... GeorgeKellerman/angels-and-vcs... TheFunded.com: The Resource for Entrepreneurs. Blowing Up Startups Since 2010. Cutting Up the Founder’s Pie. The Founders’ Pie Calculator By Frank Demmler Several weeks ago, we took a look at the founders’ pie. 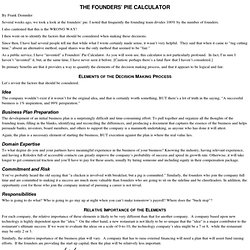 I noted that frequently the founding team divides 100% by the number of founders. I also cautioned that this is the WRONG WAY! I then went on to identify the factors that should be considered when making these decisions. Marshall Auerback and Rob Parenteau: The Myth of Greek Profligacy & the Faith Based Economics of the ‘Troika’ By Marshall Auerback, a portfolio strategist and hedge fund manager, and Rob Parenteau, CFA, sole proprietor of MacroStrategy Edge and a research associate of The Levy Economics Institute Historically, Greeks have been very good at constructing myths. 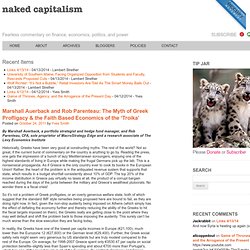 The rest of the world? Not so great, if the current burst of commentary on the country is anything to go by. Reading the press, one gets the impression of a bunch of lazy Mediterranean scroungers, enjoying one of the highest standards of living in Europe while making the frugal Germans pick up the tab. TechStars. Floodgate Fund: Opening the Gates to Success. Founders Fund. VCs and Angels. SVAngel. AngelList. The Great Startup Game: How to Close Angel Investors. How to Kill the Angel Investor "Deal-Killers" 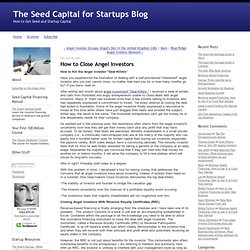