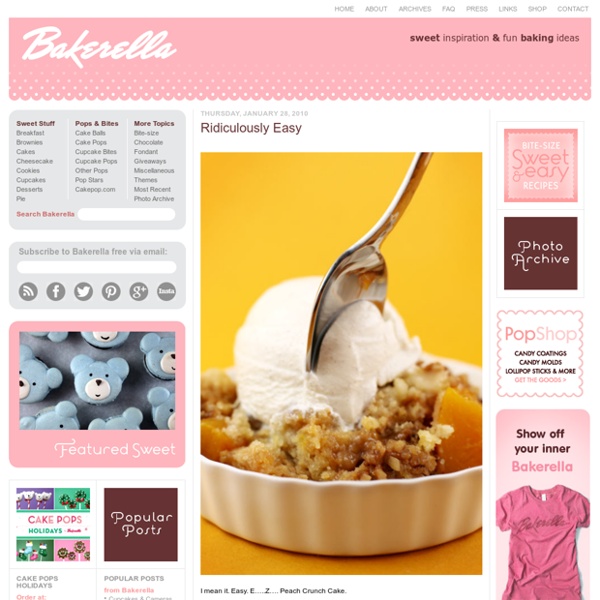 I mean it. Easy. E…..Z…. Peach Crunch Cake. You need some sliced peaches in syrup. Just dump them in a 13 X 9 dish. Note: this can also be called a dump cake. Cut the peaches into smaller pieces and you can distribute them more evenly. Next up, you need a yellow cake mix. Sprinkle it right over the top of the peaches. Keep sprinkling until it’s all covered up. Then layer 1 stick of butter right on the top. For some reason this photo makes me smile. And this really makes me smile. Oh this is looking good. Finally, add some chopped walnuts. Here ’tis from the top and again from the side. Bake it at 350 degrees for about 40 minutes and voila… Peach crunch cake. Some for me… Some more for me… Good alone… good warm… good cold… and Good warm with something cold. Yum. Peach Crunch Cake 24.5 oz jar of sliced peaches in light syrup 1 package yellow cake mix 1 stick butter (1/2 cup), cut into 16 pieces 1 cup brown sugar 1/2 cup chopped walnuts Preheat oven to 350 degrees F. Enjoy! See, that was easy. Go.

Two-Bite Strawberry Hand Pies This post comes to you from damply beautiful Seattle, Washington! Yes, kids, I am in Seattle for BlogHer Food 2012 and not just as an attendee, but I am speaking! I am nervous, but terribly excited, and ready to get the party started! The last month has been a CRAZY travel month for me. First, I went to Camp Blogaway, then I spent 6 days in Tokyo (expect a few Japanese themed recipes in the future – the place is life changing!), and now I am here in Seattle. A cupcake for every day of the month. The cone of happiness SCORE 114 Hooray! SCORE 108 Horn mustaches. SCORE 124 Spaghetti With Garlic, Olive Oil, and Chili Flakes Translated: spaghetti with garlic, oil, and chili pepper flakes. This is the kind of meal that makes you stop and think that the simplest foods are often the most wonderful. With only a few ingredients that are staples in most pantries, you can create a beautiful, flavorful, heartwarming meal from scratch. Spaghetti aglio, olio, e peperoncino is a traditional Italian pasta dish. It's well loved by many because it's so easy and inexpensive to make.

S’More Pie ∙ How To by Workman on Cut Out To make the filling: Whisk the egg yolks, sugar, cornstarch, and salt together in a heatproof bowl until thick and pale in color. Set aside. In a medium saucepan, bring the milk to a gentle boil. Whisk about ½ cup of the hot milk into the egg yolks to temper them, so they won’t curdle, then, continuing to whisk, add the remainder of the milk in a steady stream. Set the bowl over a medium saucepan of simmering water (do not let the bottom of the bowl touch the water) and cook the egg-milk mixture, whisking constantly, until thick and glossy, 5 to 7 minutes. Remove the bowl from the heat and whisk in the vanilla and melted chocolate until well combined.

Death By Oreo Cupcakes They are probably the best Oreo cakes I have ever tried. A lot of cake's that I have experimented with before are like a vanilla cake with bits of Oreo in them, which didn't really give them enough Oreo flavor. But these were a lot better. I used a dark chocolate fudge cake mix instead of just a regular chocolate cake mix, which went really well with the cookies and gave the cakes just a little more flavor. So, in this recipe there is Oreo's in the cake, in the frosting, and at the bottom is a Oreo surprise. That's right, you put a whole Oreo at the bottom of the cake.

Cake Batter Pancakes I’m fairly convinced that the world would be a better place if more sprinkles were involved. I know. I just made pancakes. It seems I have an unnatural obsession with cake batter. Homemade Nutella I was an exchange student (ah how many times I've said this sentence...) 5 years ago in the US. I'm not gonna talk about how it was (AMAZING) but then and there I gained sisters! Now I have one living in the States and one living in Germany. And next week we are gonna be reunited! Profiteroles advertisement No Thanks Keep In Touch With MarthaStewart.com Sign up and we'll send inspiration straight to you. Martha Stewart takes your privacy seriously. Crock Pot Honey Sesame Chicken I owe my mom for finding this recipe for me! I have been so busy back and forth from the hospital that she has been such a help in having dinner ready for me when I go home to feed my baby. She made this for dinner, and I kid you not, every single person in my family LOVED it! And I mean everyone… My mom, dad, my brother, my two sisters, my brother in law, AND my picky 2 year old!

Better-Than-Crack-Brownies I’m sorry for doing this to you. I really am. But see, last Friday while I was on a 10-hour road trip heading for vacation, I received this recipe from a reader named Liz. Liz, I love you. That’s all I have to say. I was tortured by this recipe for a full 8 days before I could make it.