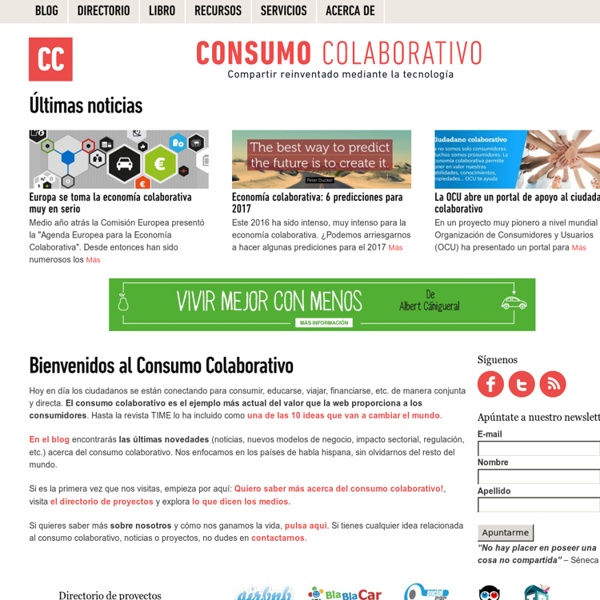 Circular Economy 100 What is the Circular Economy 100? The Circular Economy 100 is a global platform bringing together 100 pioneering businesses engaged in accelerating the transition to a circular economy over a 1000-day (3 year) period. The programme will provide the opportunity for companies to stimulate circular economy innovation, foster collaboration, build capacity and unlock the economic opportunity through accelerator workshops, distance learning modules and an annual summit, hosted by the Foundation and its Founding Partners. Business Rationale

Wal-Mart Wants to Use Delivery Drones, Our Skepticism Reaches New High Sigh. You’ve heard this “sigh” before: it’s the “oh great someone else is promising consumer drone delivery now” sigh. According to documents seen by Reuters, Wal-Mart has filed an application with the U.S. Federal Aviation Administration to test drones for a variety of purposes, including package delivery to homes. Wal-Mart has been testing drones indoors for months, and they plan to use drones made by DJI for their expanded testing program, pending FAA approval. Wal-Mart is asking the FAA for permission to test drones for at least three different purposes. Shareable: Mais Oui, We Share Photo courtesy of Stefano Borghi “During the most impressive panel of the conference (that I saw), four whipsmart women talked about the intersection of the collaborative economy with government: Molly Turner, Director of Public Policy for Airbnb, April Rinne of Collaborative Lab, Helen Goulden from Nesta, and Anne-Laure Brun Buisson from Sharelex. They recommended a collaborative, non-oppositional relationship with policymakers and regulators, and pointed out that most governments are in crisis, already unable to provide basic services and facing more cuts. In other words, government has never been more open to ideas like a skillsharing platform that supports employment; transportation-sharing programs that enable mobility; a time-dollar system that provides care to fragile elderly, etc. Read more of Ariane’s highlights on Shareable .

From a Facebook group to an organization - the OuiShare Manifesto It all started in 2010, when Antonin Léonard was blogging about collaborative consumption in French. Little did he know that this was the beginning of the organization we now call OuiShare – a network of people with common values, which have finally been summarized in a manifesto. In its early stages, the OuiShare community was a Facebook group created by Antonin in April 2011 to connect people who believed in the potential of the collaborative economy and were trying to make it a reality.

6 reasons to use Pearltrees Pearltrees is the first and largest social curation community on the Internet. It’s a place to organize, discover and share all the cool content you find online. However, beyond this basic definition, a question remains: why would I want to use Pearltrees? Freeworlder.org - Being a Freeworlder (Press Release July 2013) Details Published: Wednesday, 10 July 2013 09:16 Written by Colin Turner British public to choose ‘greatest issue of our time’ for £10 million prize Longitude Prize 2014, a challenge with a prize fund of £10 million, has been launched today to help solve one the greatest issues of our time. The British public will cast the deciding vote to choose the issue that the prize will tackle. The prize has been developed and run by Nesta, the UK’s innovation foundation. It was launched by the Prime Minister at G8 last year, and through the Department for Business, Innovation and Skills is being supported by the Technology Strategy Board, the UK’s innovation agency, as launch funding partner. Longitude Prize 2014 commemorates the 300th anniversary of the Longitude Act where in 1714 the British government threw down the gauntlet to solve one of the great scientific challenges of that century: how to pinpoint a ship’s location at sea by knowing its longitude. The challenge was solved by watchmaker and carpenter John Harrison who designed the chronometer, the first seafaring clock that allowed accurate navigation.

Global Research - Centre for Research on Globalization President Barack Obama stood behind the podium and apologized for inadvertently killing two Western hostages – including one American – during a drone strike in Pakistan. Obama said, “one of the things that sets America apart from many other nations, one of the things that makes us exceptional, is our willingness to confront squarely our imperfections and to learn from our mistakes.” In his 2015 state of the union address, Obama described America as “exceptional.” When he spoke to the United Nations General Assembly in 2013, he said, “Some may disagree, but I believe that America is exceptional.”

Report Vol. 3 - 2014 - Circular Economy Reports Report Vol. 3 - 2014 About the Report Business leaders and governments alike acknowledge that continued wealth generation requires a new industrial model that is less dependent on primary energy and materials inputs. The top 50 apps for creative minds There’s an ongoing argument in the technology world about whether tablets and smartphones are more focused on consumption than creativity. As time has gone on, though, the number of apps helping us do more than passively read, watch and listen has grown. Many also fall into a longer heritage of technology that democratises activities like film-making, photography and music-making. Video and photography apps now contain editing features based on those used in professional software, but made accessible enough for anyone to use in a couple of taps, and music-making apps are reducing the barrier to making listenable sounds.

Seven Ways Sharing Can Make You Happy Though it might seem that there’s not much in the way of silver linings in these dark economic times, there is at least one: as people learn to make do with less, they are discovering the many benefits of sharing. Car-sharing, babysitting cooperatives, and tool lending are just a few of the many creative ways people are eschewing ownership and learning to share the goods and services they need. But sharing can do more than just save you a buck. New psychological research suggests that sharing fosters trust and cooperation in the community and contributes to personal well-being. Here are some of the ways that sharing can boost your happiness levels and help your community thrive: 1.

Urban Organics-Haberman Transforming the food system and strengthening local communities. Haberman believes in the pioneering spirit so much that sometimes we just have to take the plunge ourselves. At a new organic urban farm in St.