Grown-Lit Sequels for All Your Fav YA Novels. The John Templeton Foundation. 22 Books You Should Read Now, Based On Your Childhood Favorites. Library info. Library. Maybe Someday. Corrigenda. Language Etymology. Plume. Curricu Rumba. Libraries. ENGAGING SITES. Research Nodes. Well Read Bookish. Personal Reading List. Poiemaeia. Culture - Reading the world in 196 books. I used to think of myself as a fairly cosmopolitan sort of person, but my bookshelves told a different story. 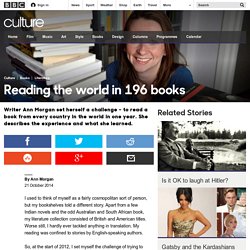 Apart from a few Indian novels and the odd Australian and South African book, my literature collection consisted of British and American titles. Worse still, I hardly ever tackled anything in translation. My reading was confined to stories by English-speaking authors. So, at the start of 2012, I set myself the challenge of trying to read a book from every country (well, all 195 UN-recognised states plus former UN member Taiwan) in a year to find out what I was missing. With no idea how to go about this beyond a sneaking suspicion that I was unlikely to find publications from nearly 200 nations on the shelves of my local bookshop, I decided to ask the planet’s readers for help. The response was amazing. Small states This was particularly true for francophone and lusophone (Portuguese-speaking) African countries. Then there were places where stories are rarely written down. A year of reading the world.

A year of reading the world. In 2012, the world came to London for the Olympics and I went out to meet it. 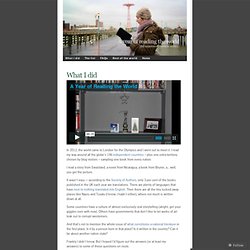 I read my way around all the globe’s 196 independent countries – plus one extra territory chosen by blog visitors – sampling one book from every nation. I read a story from Swaziland, a novel from Nicaragua, a book from Brunei, a… well, you get the picture. It wasn’t easy — according to the Society of Authors, only 3 per cent of the books published in the UK each year are translations. There are plenty of languages that have next to nothing translated into English. Book quiz: can you identify these classic novels by their working titles? 10 Book Series So Addictive, You Never Want Them to End.

My Ideal Bookshelf: Famous Artists and Writers Select Their All-Time Favorite Books. By Maria Popova Reverse-engineering identity through the love of books. 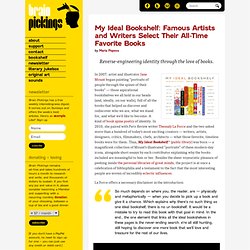 In 2007, artist and illustrator Jane Mount began painting “portraits of people through the spines of their books” — those aspirational bookshelves we all hold in our heads (and, ideally, on our walls), full of all the books that helped us discover and rediscover who we are, what we stand for, and what we’d like to become. A kind of book spine poetry of identity. In 2010, she paired with Paris Review writer Thessaly La Force and the two asked more than a hundred of today’s most exciting creators — writers, artists, designers, critics, filmmakers, chefs, architects — what those favorite, timeless books were for them.

Thus, My Ideal Bookshelf * (public library) was born — a magnificent collection of Mount’s illustrated “portraits” of these modern-day icons, alongside short essays by each contributor explaining why the books included are meaningful to him or her. Michael Chabon. Exhibition Items - Books That Shaped America  Well, At Least There Was Good Stuff to Read: The Books of the Decade. Anybody remember how anxious and thrilled we were in those last months of the 20th century? 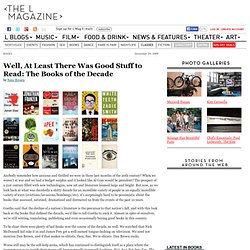 When we weren't at war and we had a budget surplus and it looked like Al Gore would be president? The prospect of a 21st century filled with new technologies, new art and literature loomed large and bright. But now, as we look back at what was decidedly a shitty decade for an incredible variety of people in an equally incredible variety of ways (evictions/invasions/bombings/etc), it's surprisingly hard to be pessimistic about the books that assessed, satirized, dramatized and distracted us from the events of the past 10 years. Goethe said that the decline of a nation's literature is the precursor to that nation's fall, and with this look back at the books that defined the decade, we'd like to tell Goethe to suck it. Top Ten Best Novels You've Never Heard Of - The Journal Pulp. Or perhaps you have. 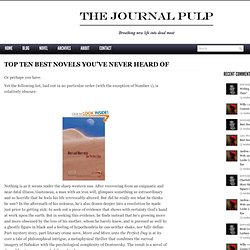 Yet the following list, laid out in no particular order (with the exception of Number 1), is relatively obscure: Nothing is as it seems under the sharp western sun. After recovering from an enigmatic and near-fatal illness, Gasteneau, a man with an iron will, glimpses something so extraordinary and so horrific that he feels his life irrevocably altered. The Best Commencement Speeches, Ever. Top 100 Speeches of the 20th Century by Rank. Book Recommendations: Which three books should every high school student in America be required to read in order to be able to graduate, and why. W. Auden's English 135 Suggested Reading. Ginsberg 77 Beat Literary History Reading List. UC Berkeley Summer Reading List. Teacher's Top 100 Books for Children.

The following list was compiled from an online survey in 2007. 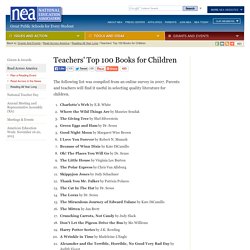 Parents and teachers will find it useful in selecting quality literature for children. Charlotte’s Web by E.B. White Where the Wild Things Are by Maurice Sendak The Giving Tree by Shel Silverstein Green Eggs and Ham by Dr. Seuss Good Night Moon by Margaret Wise Brown I Love You Forever by Robert N.