Amnesia - Fanlore. Masterlist - Fanlore. I'm Gonna REC It!, Tags. FanFare. Hi, do you have any recs for respectfully done... - bookshop. Fanfiction Site List. The following sites are for HP fics only. 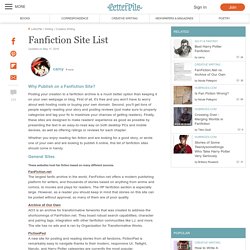 Some might have specific requirements for story length, type, pairings, etc. FanficAuthors.netA small invitation-only archive ran by fanfic writer Jeconais, FanficAuthors.net offers some of the best and most interesting Harry Potter fics ever written. If you're looking for good stories to read and don't have the time to wade through the junk, this website is probably your best bet. In addition, they provide links to download the stories in ePub and other formats. HarryPotterFanFiction.comClaiming to be the best and oldest Harry Potter fanfiction site on the web, this archive currently contains over 78,000 stories categorized by genre, pairing, and format. MuggleNetThe popular Harry Potter fansite, MuggleNet, has a section dedicated to fan fiction as well.

PortkeyAn older site with an outdated design and layout that still hosts quite a number of great stories. UnknowableRoomA Harry Potter coomunity which has sections for fanart and fanfics. 15 most popular fanfiction websites. Themed Recs - capitu's Harry/Draco recs. I never make non-rec posts here, but this is a rec post in a way. ^^ For a few months now I've been crossposting the recs to capiturecs at Tumblr, and often I get requests to make these themed recs. 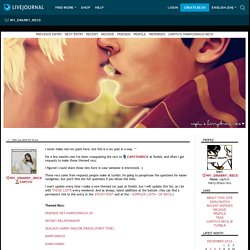 I figured I could share those lists here in case someone is interested. :) These recs come from requests people make at tumblr. I won't update every time I make a new themed rec post at Tumblr, but I will update this list, as I do with these lists every weekend. Themed Recs: Friends set Harry/Draco up Secret Relationship Jealous Harry and/or Draco (first time) bamf! Dark! Creature/Bonding fics Muggle AU Hogwarts Era [not 8th year] Gender-bender fics Over 50K fics Harry or Draco as musicians Heart-pounding Mpreg Alternative Sorting Slow Built fics Humour/funny stories Fluffy Fics Oblivious! Dirty bookshelves. Tropes. Hannibal/Will Recs - I Love Tomas Kalnoky. Hannibal/Will is a great pairing. 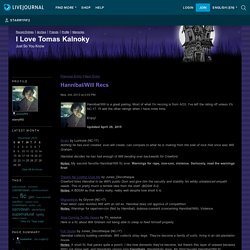 Most of what I'm reccing is from AO3. I've left the rating off unless it's NC-17. I'll add the other ratings when I have more time. Enjoy! Updated April 28, 2015 Scars by Luvkurai (NC-17) Nothing he has ever created, ever will create, can compare to what he is making from the slab of rock that once was Will Graham. Hannibal decides he has had enough of Will bending over backwards for Crawford. Notes: My second favorite Hannibal/Will fic ever. There's No Control Over Me by Junes_DiscothequeCrawford hires Hannibal to be Will's public Dom and give him the security and stability his wildly unbalanced empath needs.

Mignardises by Gryvon (NC-17)Their latest case reunites Will with an old ex. The Newbie's Guide to Fannish LiveJournal. Aznara's recs - Masterlist of rec lists XD. I saw someone asking for rec lists in a post so I decided to put here all the rec lists I've found. 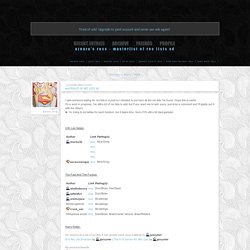 Hope this is useful.It's a work in progress, I've still a lot of rec lists to add but if you want me to add yours, just drop a comment and I'll gladly put it with the others.► I'm trying to do tables for each fandom, but it takes time. Sorry if it's still a bit disorganized. CSI: Las Vegas: The Fast And The Furious: Harry Potter: No need to do a list of rec lists, it has already been done brilliantly by. Espresso Recommendations.