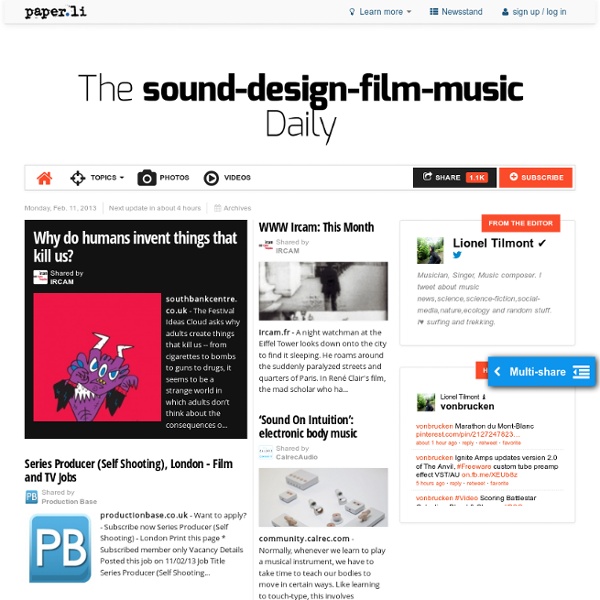 Royalty Free Music - from 300 Monks « 300 Monks Visionary Music Market-Ticker The Brain in Film | BrainWorld ■ It’s true that movies—and all art—is about what the artist intends and what the mind interprets. But films about the mind—the tricks it plays, the depths it sinks to and the feats it’s capable of—are guides to the zeitgeist of their era, as well as a window into the future. For example, George Orwell’s book 1984 predicted fantastical concepts that are now commonplace (doublespeak=politics?). • The Wachowski brothers’ first Matrix (there were two less satisfying sequels) challenged reality and our place in it. • This is a movie about getting into your head—literally. • Imagine if the very source of your being was betraying you. • One of the greatest aspects of the mind is its ability to remember. • Avatar tells the story of a physically challenged man who gets a second chance to be a soldier through his avatar—a computer’s representation of a person or his/her alter ago. High Anxiety (1977) Written by, directed by and starring Mel Brooks A spoof of and homage to psychodrama thrillers.

Tech News | Innovation News | Money News Federico Fellini Federico Fellini (Italian: [fedeˈriːko felˈliːni]; January 20, 1920 – October 31, 1993) was an Italian film director and scriptwriter. Known for his distinct style that blends fantasy and baroque images with earthiness, he is considered one of the greatest and most influential filmmakers of the 20th century.[1] In a career spanning almost fifty years, Fellini won the Palme d'Or for La Dolce Vita, was nominated for twelve Academy Awards, and directed four motion pictures that won Oscars in the category of Best Foreign Language Film. In 1993, he was awarded an honorary Oscar for Lifetime Achievement at the 65th Annual Academy Awards in Los Angeles.[2] Early life and education[edit] Rimini (1920–1938)[edit] Fellini was born on January 20, 1920 to middle-class parents in Rimini, then a small town on the Adriatic Sea. Enrolled at the Ginnasio Giulio Cesare in 1929, he made friends with Luigi ‘Titta’ Benzi, later a prominent Rimini lawyer (and the model for young Titta in Amarcord (1973)).

Wall Street, investment bankers, and social good A few months ago, I came across an announcement that Citigroup, the parent company of Citibank, was to be honored, along with its chief executive, Vikram Pandit, for “Advancing the Field of Asset Building in America.” This seemed akin to, say, saluting BP for services to the environment or praising Facebook for its commitment to privacy. During the past decade, Citi has become synonymous with financial misjudgment, reckless lending, and gargantuan losses: what might be termed asset denuding rather than asset building. In late 2008, the sprawling firm might well have collapsed but for a government bailout. The award ceremony took place on September 23rd in Washington, D.C., where the Corporation for Enterprise Development, a not-for-profit organization dedicated to expanding economic opportunities for low-income families and communities, was holding its biennial conference. Pandit, who moved to the United States at sixteen, is rarely described as a communitarian.

Pedro Almodóvar Blog Every time I get up to go on a trip I feel an irresistible need to stay at home. As if every trip signified the end of a stage in my life, which the journey turns into an irreparable loss. It doesn’t matter if the reason for the trip is pleasure and enjoyment. That sensation, a mixture of failure, melancholy and anticipated nostalgia, always accompanies me when I set out on a trip. On the way to Torrejón airport, I read El País and Les Inrocks. When I reach the airport, I start to take the first notes accompanied by the agreeable presence of the Slaves of El Deseo (Bárbara Peiró, my Intermediary with the Outside World, Lola García, Responsible for Internal Affairs, Esther García, El Deseo’s Director of Production), my brother Agustín, his wife Casilda and a whirlwind called Bibiana, who arrives in a flurry because of her extremely busy Monagesque agenda.

How Dems Allowed the Tea Party to Rebrand the GOP TRNN Replay (first published days before the 2010 elections) - Paul Jay: Top six ways Obama and the Democratic Party allowed a resurgence of the Republicans - Transcript PAUL JAY, SENIOR EDITOR, TRNN: Welcome to the The Real News Network, I'm Paul Jay in Washington. On Tuesday, American voters are going to choose which section of the American elite they want to govern them. Who says that's the choice? More Info Comments Our automatic spam filter blocks comments with multiple links and multiple users using the same IP address. Hitchcock’s "Rear Window," Recut Into An Amazing Panoramic View Rear Window is, in my book, Hitchcock’s best film. It hooks you in immediately, trapped in the same sense of voyeuristic helplessness as Jimmy Stewart’s wheelchair-bound character who finds himself the witness to a murder in his own backyard. It’s also a film that draws much of its suspense from limited perspective--shots cropped by a telephoto lens, tiny snippets of isolated characters going about their days. Powered by After Effects and the patience of Job, Jeff Desom recut (and reshaped) Rear Window into one giant panorama. “I was asked by a local (Luxembourg) venue to create a projection that could be looped on a very wide screen,” Desom tells Co.Design. It was a moment of inspiration that would prove punishing to actualize. Once his proof-of-concept was complete, Desom had to map an intersecting storyline for each of Rear Window ’s characters that appeared in the POV clips. It’s an idea that could drive Hitchcock mad with paradox.

Petty China's Nobel problems to continue China reacted initially by terming the award an “obscenity” and demanded an apology. It accused Europeans generally of using the Nobel prize as part of a plot to contain China. It has also accused the West of trying to force its values on China. Now, however, the focus is on the scheduled formal ceremony for the conferment of the award in Oslo on Dec. 10, at a grand ceremony in the presence of the king and queen of Norway. It is unclear who will receive the award on Liu's behalf. It is also highly unlikely that his wife, Liu Xia, will be allowed to do that either. Liu's wife has made public a list of about 140 names of his friends whom she has asked to receive the award on her husband's behalf. However, there are one or two dissidents who are currently overseas, and who may therefore be able to fly to Oslo. One is the writer Dai Qing, a leading dissident who is on Liu Xia's list and who is currently in Canada on a speaking tour.