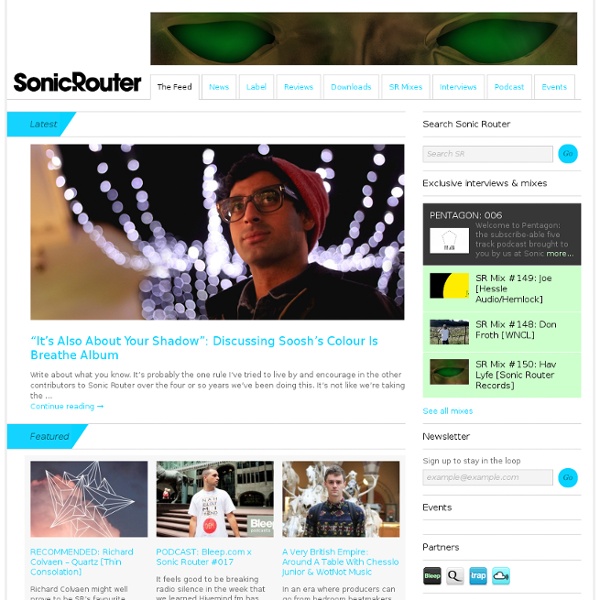 Attorney Street › Kmag Mixtapes | FatKidOnFire April 9th, 2014 By: FatKidOnFire Liverpool’s Got Bass Less Effect x FatKidOnFire After yesterday's FatKidOnFire feature with Brighton's The Mine, we're heading north for todays interview with Liverpool's Less Effect. Matt and the guys haven't been around too long but have been steadily making a name for themselves, thanks to their use of the impeccable RC1 and solid line ups at... April 8th, 2014 Down The Mine Duku & Sibla x FatKidOnFire Having first met the duo during my Lithuanian dubstep adventure, and experiencing their skill behind the decks, I've been keen to feature Duku and Sibla here on FatKidOnFire in some form or other since returning from Vilnius. April 7th, 2014 Sordez – Mix of the Week OneFortyDeep x FatKidOnFire After a week's break in updates, we're back with the 19th Mix of The Week from OneFortyDeep's founder Andy. You’re Too Damn Fly Lutetia Dubz x FatKidOnFire April 2nd, 2014 Celebrating A Sub-Conscious Nottingham Sub:Conscious x FatKidOnFire March 25th, 2014 March 17th, 2014 Sleeper

InstaSound Phuturelabs HUSH HOUSE Bassweight Society | Dedicated to the proliferation of weighty bass music in the United States. | Page 2 Today I’m launching a new mix/interview series called ‘Selections’ to coincide with the advent of Bassweight Society’s first official logo and the next chapter for the in the blog’s history. For the remainder of 2014 I will be featuring at least one artist within the borders of the USA per month, and have accordingly deemed the forthcoming subset of the ‘Selections’ series ‘[Stateside] Selections’. My aim with this is to build a strong foundation within the roots of my home turf, as analysis of the blog’s current demographic is significantly skewed towards audiences across the ponds. I have ZERO complaints about this whatsoever as I find the fact that people from all over the world are connecting on a similar platform amazing. The inaugural feature comes from the Dirty South don, Deafblind. Big up Rich, thanks a lot for taking the time to answer some questions for the readers. Easy man, no stress, cheers for asking. Hmmm, that’s a tough one. Good question. Definitely. Cheers! One love.