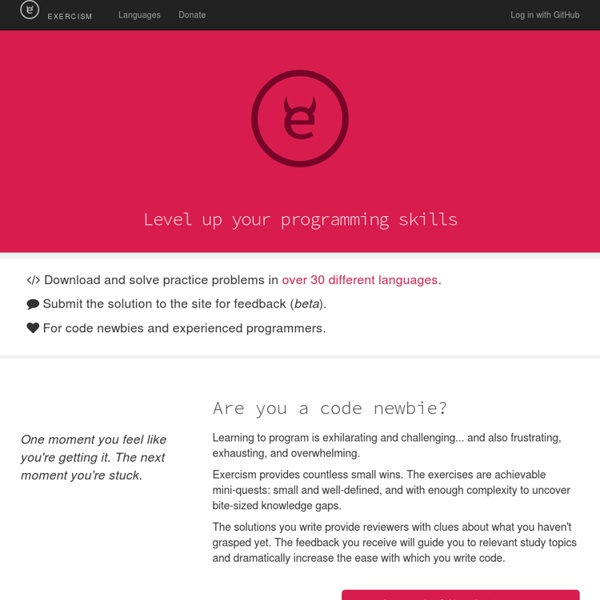 Your first GraphQL component – Abhi Aiyer – Medium If you follow my musings surely you must know how enamored I am with GraphQL. Frequently asked questions I get aren’t really about how it works anymore, but rather: How do I get started and build something? Today I want to get you your first win. Today, let’s build a little UI Component who’s data is backed by a GraphQL API. 515 Free Online Programming & Computer Science Courses You Can Start in April Five years ago, universities like MIT and Stanford first opened up free online courses to the public. Today, more than 700 schools around the world have created thousands of free online courses. I’ve compiled this list of over 515 such free online courses that you can start this month.

aaronc/freactive pronounced "f-reactive" for functional reactive - name subject to change. This library should be considered experimental - it has not been widely tested. FYI: this documentation is now significantly out-dated and will hopefully get updated soon freactive is a high-performance, pure Clojurescript, declarative DOM library.

Playbook for software design and development We are thoughtbot. We have worked with hundreds of product teams all over the world, from individual founders who are self-funded, to large multi-national organizations. We have also created our own products and dozens of open source libraries. This is our playbook. It details how we make successful web and mobile products, and also how we run our company.

How to Install and Configure Kubernetes and Docker on Ubuntu 18.04 LTS Kubernetes is an open source platform for managing containerized applications. It allows you to manage, scale, and automatically deploy your containerized applications in the clustered environment. Kubernetes is developed by Google. TIOBE Software: Tiobe Index TIOBE Index for January 2016 January Headline: Java is TIOBE's Programming Language of 2015! Java has won the TIOBE Index programming language award of the year. This is because Java has the largest increase in popularity in one year time (+5.94%). A dive into spatial search algorithms – Vladimir Agafonkin – Medium I’m obsessed with software performance. One of my main responsibilities at Mapbox is discovering ways to make our mapping platform faster. And when it comes to processing and displaying spatial data at scale, there’s no concept more useful and important than a spatial index. Spatial indices are a family of algorithms that arrange geometric data for efficient search.

A Guide to Becoming a Full-Stack Developer in 2017 – Coderbyte A Full-Stack Web Developer is someone who is able to work on both the front-end and back-end portions of an application. Front-end generally refers to the portion of an application the user will see or interact with, and the back-end is the part of the application that handles the logic, database interactions, user authentication, server configuration, etc. If you want to become a Full-Stack Web Developer in 2017 and land your first job, below is a reference guide with a list of things you should learn. Almost every single program, whether online or in-person, that is teaching you how to be a web developer will start with HTML and CSS because they are the building blocks of the web. Simply put, HTML allows you to add content to a website and CSS is what allows you to style your content.