Most Popular Repurposing Tricks of 2011 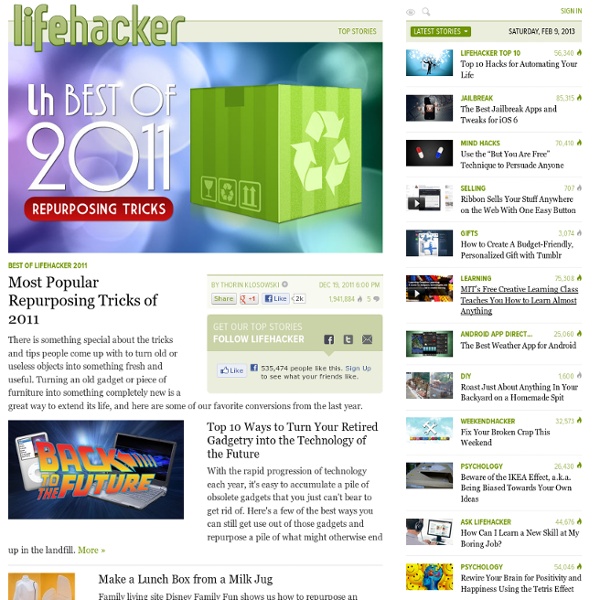 The best trick of all is repairing broken stuff. You would be amazed that in this throw away age so many things can be repaired easily. Invest your money in quality tools, and you will find the tool pays for itself in the first few repairs you make with it. There are wonderful adhesives and tapes that people aren't aware of that work wonders. Take an hour and go to a home hardware store and really browse around to discover some of these wonders of the modern world. You can also look online at some great catalogs that sell woodworking supplies, and find a great assortment of fine tools that you can use to repair almost anything.

My Collection of Funny Emails. Send funny emails to your friends! Why didnâ€™t I think of that? Youâ€™ll be uttering those words more than once at these ingenious little tips, tricks and ideas that solve everyday problems... some you never knew you had! Hull strawberries easily using a straw. Rubbing a walnut over scratches in your furniture will disguise dings and scrapes. SCHOPENHAUERS 38 STRATAGEMS, OR 38 WAYS TO WIN AN ARGUMENT Arthur Schopenhauer (1788-1860), was a brilliant German philosopher. These 38 Stratagems are excerpts from "The Art of Controversy", first translated into English and published in 1896. Carry your opponent's proposition beyond its natural limits; exaggerate it. The more general your opponent's statement becomes, the more objections you can find against it. The more restricted and narrow his or her propositions remain, the easier they are to defend by him or her. Use different meanings of your opponent's words to refute his or her argument.

50 Amazingly Helpful Time-Tested Tips for the Kitchen You know all of those helpful kitchen-related suggestions that old-timers are so willing to share with the younger generations? These little tips and tricks might be called “kitchen hacks” these days, but they’re still the same good old nuggets of wisdom that they always were. As with any old wives’ tale, hack, or tip, your mileage may vary. Some of these gems have been around for several lifetimes - and according to most grandmas, they really work. 1. For cleaning smelly hands after chopping onions or garlic, just rub them on a stainless steel spoon.

The Best of British - The Americans guide to speaking British... Ace - If something is ace it is awesome. I used to hear it a lot in Liverpool. Kids thought all cool stuff was ace, or brill. Hiking / Biking Lacing Inside-out variation: For a neater (though slightly less comfortable) variation, the lacing can be done inside-out, with only the top two horizontal sections fed under the sides of the shoes to emerge through the top and 2nd from top eyelets (where the knots will be tied). This is effectively a side-knotted version of Straight Bar Lacing. The result is much neater, particularly when the sneakers have contrasting shoelaces, which would otherwise look messy with the vertical sections visible on the outside.

How to Build a Go-Kart in One Day - DIY Go Cart Plans Builder: Larry Erd, Pompano Beach, Fla.Plans: spidercarts.com "Black Widow" Cost: $689.15 1.) Plans and Parts Erd and his 7-year-old son, Harrison, used $14.99 plans for the "Black Widow" go-kart from spidercarts.com. Plans like these, whether they are free or require a fee, often give frame dimensions but leave steering, axle, throttle and cable connections up to the builder.

Smart tips to make life easier - StumbleUpon Posted on February 24, 2012 in Humor If you’re new here, you may want to subscribe to our RSS feed or follow us on Facebook or Twitter . Thanks for visiting! Rate this Post (16 votes, average: 5.00 out of 5) Loading... 25 clever ideas to make life easier Via: amy-newnostalgia.blogspot.com Why didn’t I think of that?! We guarantee you’ll be uttering those words more than once at these ingenious little tips, tricks and ideas that solve everyday problems … some you never knew you had! (Above: hull strawberries easily using a straw). Psychologists chase down sleep demons - StumbleUpon UNIVERSITY PARK, Pa. -- What do Moby Dick, the Salem witch trials and alien abductions all have in common? They all circle back to sleep paralysis. Less than 8 percent of the general population experiences sleep paralysis, but it is more frequent in two groups -- students and psychiatric patients -- according to a new study by psychologists at Penn State and the University of Pennsylvania. Sleep paralysis is defined as "a discrete period of time during which voluntary muscle movement is inhibited, yet ocular and respiratory movements are intact," the researchers state in the current issue of Sleep Medicine Reviews. Hallucinations may also be present in these transitions to or from sleep. Alien abductions and incubi and succubi, as well as other demons that attack while people are asleep, are implicated as different cultural interpretations of sleep paralysis.

Design Crush & Popsicles! Not to sound full of myself, but I’m pretty sure this is the be all, end all of popsicle roundups. There’s a little something for everyone: the foodies, the purists, the ones who prefer frozen yogurt, the ones who prefer a little alcohol, everyone. Tweny-five options to be exact. The post I did last summer on the cold guys was one of DC’s most viewed ever, so I thought you’d all be up for another round – was I right? Click on the photo to be taken to the recipe. 15 Cool Alcove Beds Home design DIY Kids Weddings Fashion and Style FOOD Cool stuff 15 Cool Alcove Beds Alcove beds are naturally fun for kids.

I'm so going to make the milk box! Thanks by jennifer_therese Sep 2