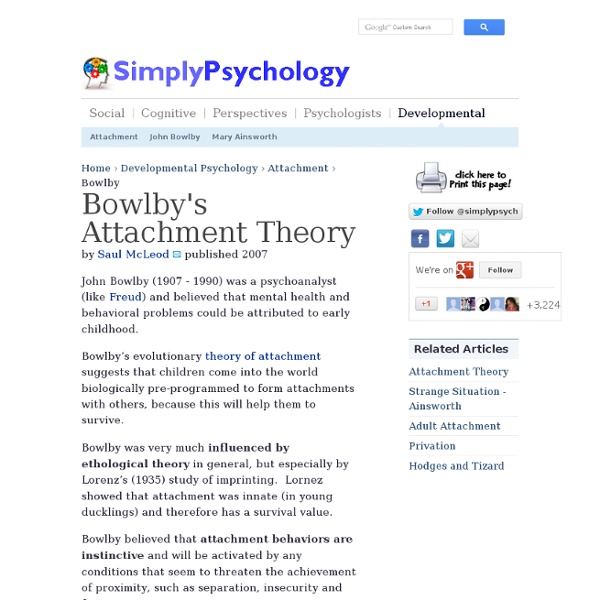 by Saul McLeod published 2007 John Bowlby (1907 - 1990) was a psychoanalyst (like Freud) and believed that mental health and behavioral problems could be attributed to early childhood. Bowlby’s evolutionary theory of attachment suggests that children come into the world biologically pre-programmed to form attachments with others, because this will help them to survive. Bowlby was very much influenced by ethological theory in general, but especially by Lorenz’s (1935) study of imprinting. Bowlby believed that attachment behaviors are instinctive and will be activated by any conditions that seem to threaten the achievement of proximity, such as separation, insecurity and fear. Bowlby (1969, 1988) also postulated that the fear of strangers represents an important survival mechanism, built in by nature. These attachment behaviors initially function like fixed action patterns and all share the same function. Main Points of Bowlby’s Theory 1. 2. 3. 4. They found 3 progressive stages for distress:

Heathcliff- The Villain of Wuthering Heights | villainsinliterature Another post on this blog has suggested that the character of Heathcliff in Emily Brontë’s Wuthering Heights should not be considered the villain of the novel. He is just a confused man, enraptured by passion. I entirely disagree, to the point where this blog post is a rebuttal of the previous one. Wuthering Heights is not a novel full of likeable characters by any means. I found it impossible to feel any sympathy for anyone as the story progressed. If anything, it is Heathcliff’s actions which make him a completely reprehensible character. It is not just his actions that make Heathcliff a despicable person. In conclusion, it should be very difficult for someone to actually feel any real sympathy towards Heathcliff. Like this: Like Loading...

Secure Attachment & Bonding: Understanding the Different Ways of Bonding and Communicating With Your Child Understanding the Different Ways of Bonding and Communicating With Your Child Why is the attachment bond so important? A landmark report, published in 2000 by The Committee on Integrating the Science of Early Childhood Development, identified how crucial the attachment bond is to a child’s development. This form of communication affects the way your child develops mentally, physically, intellectually, emotionally, and socially. A secure attachment bond ensures that your child will feel secure, understood, and be calm enough to experience optimal development of his or her nervous system. Developing a secure attachment bond between you and your child, and giving your child the best start in life, does not require you to be a perfect parent. Your baby needs more than love As a parent or primary caretaker for your infant, you can follow all the traditional parenting guidelines, provide doting, around-the-clock care for your baby, and yet still not achieve a secure attachment bond.

Ghosts in Wuthering Heights We're not exactly talking about Gryffindor Tower's Nearly Headless Nick here, but there are definitely some haunting figures in Wuthering Heights. It is important to note, though, that Brontë's ghosts are ambiguous entities and may have logical, rather than supernatural, explanations. Take Catherine's ghost at the beginning. In many ways the ghosts in Wuthering Heights symbolize a lack of closure for the lovers. At the end of the novel, Nelly Dean tells Lockwood that the "country folks would swear on their Bible [the ghost of Heathcliff] walks," and they report having seen him "near the church, and on the moor, and even within this house" (34.99). So what's the verdict on the ghosts?

Attachment Theory: How Early Attachments Shape Behavior Attachment theory is focused on the relationships and bonds between people, particularly long-term relationships including those between a parent and child and between romantic partners. What is Attachment? Attachment is an emotional bond to another person. Psychologist John Bowlby was the first attachment theorist, describing attachment as a "lasting psychological connectedness between human beings." Bowlby believed that the earliest bonds formed by children with their caregivers have a tremendous impact that continues throughout life. He suggested attachment also serves to keep the infant close to the mother, thus improving the child's chances of survival. The central theme of attachment theory is that primary caregivers who are available and responsive to an infant's needs allow the child to develop a sense of security. Ainsworth's "Strange Situation" In her 1970's research, psychologist Mary Ainsworth expanded greatly upon Bowlby's original work. Why Attachment Matters References

History of Persecution - Persecution Prior to the 20th Century Gypsies in Europe - pre 20th Century Persecution Prior to the 20th Century Germany The Gypsies first appeared in Germany in 1407. The first anti-Gypsy law was passed (the first of 48 such laws between then and 1774). The Gypsies were driven out of Frankfurt-am-Main by force. The Reichstag meetings in Frelbourg and landau accused the Gypsies of being foreign spies, carriers of plague and traitors to Christendom, practising witchcraft, banditry and cannibalism. All Gypsies were ordered out of Germany by Emperor Maximilian and by the same law they could be killed with impunity. They were banished from Saxony. The Gypsies were deprived of travel documents in Augsburg. 1531 and Saxony 1579 and banished. Death penalty for Gypsies found in Saxony 1661, Mainz 1714 and Prussia 1725. Norway Law stating that Gypsies had to be arrested, their property confiscated, the leaders killed and the rest expelled. These decrees stayed in force until 1845. 1845 onwards Nomadism forbidden and Traveller trades banned.

Emily Bronte Emily Bronte (1818-1849), English author and one of the famed Bronte sisters wrote Wuthering Heights (1847); Catherine Earnshaw, may you not rest as long as I am living! You said I killed you—haunt me, then! The murdered do haunt their murderers. I believe—I know that ghosts have wandered on earth. First published under Emily’s pseudonym Ellis Bell, the combination of its structure and elements of passion, mystery and doomed love as well as social commentary have made Wuthering Heights an enduring masterpiece. Emily Bronte was born on 30 July 1818 at 74 Market Street in Thornton, Bradford, Yorkshire, England. In 1824, Emily, with her four sisters entered the Clergy Daughter’s School at Cowan Bridge, near Kirkby Lonsdale. And if I pray, the only prayerThat moves my lips for meIs, ‘Leave the heart that now I bear,And give me liberty!’ Biography written by C. The above biography is copyrighted.

Id, ego and super-ego Although the model is structural and makes reference to an apparatus, the id, ego and super-ego are purely symbolic concepts about the mind and do not correspond to actual somatic structures of the brain (such as the kind dealt with by neuroscience). The concepts themselves arose at a late stage in the development of Freud's thought: the "structural model" (which succeeded his "economic model" and "topographical model") was first discussed in his 1920 essay Beyond the Pleasure Principle and was formalized and elaborated upon three years later in his The Ego and the Id. Freud's proposal was influenced by the ambiguity of the term "unconscious" and its many conflicting uses. Id[edit] According to Freud the id is unconscious by definition: In the id, "contrary impulses exist side by side, without cancelling each other out. ... Developmentally, the id precedes the ego; i.e., the psychic apparatus begins, at birth, as an undifferentiated id, part of which then develops into a structured ego.

Bobo doll experiment The Bobo doll experiment was the collective name of the experiments conducted by Albert Bandura in 1961 and 1963 studying children's behavior after watching an adult model act aggressively towards a Bobo doll. There are different variations of the experiment. The most notable experiment measured the children's behaviour after seeing the model get rewarded, punished or experience no consequence for beating up the bobo doll. This experiment is the empirical demonstration of Bandura's social learning theory. The Bobo doll[edit] Bobo doll A Bobo doll is an inflatable toy that is about 5 feet tall and is usually made of a soft durable vinyl or plastic. Experiment in 1961[edit] Method[edit] The participants in this experiment (Bandura, Ross & Ross 1961) were 36 boys and 36 girls from the Stanford University nursery school. For the experiment, each child was exposed to the scenario individually, so as not to be influenced or distracted by classmates. Results[edit] Criticism[edit] Variation 1:

Albert Bandura Albert Bandura (born December 4, 1925) is a psychologist who is the David Starr Jordan Professor Emeritus of Social Science in Psychology at Stanford University. For almost six decades, he has been responsible for contributions to many fields of psychology, including social cognitive theory, therapy and personality psychology, and was also influential in the transition between behaviorism and cognitive psychology. He is known as the originator of social learning theory and the theoretical construct of self-efficacy, and is also responsible for the influential 1961 Bobo doll experiment. A 2002 survey ranked Bandura as the fourth most-frequently cited psychologist of all time, behind B. F. Skinner, Sigmund Freud, and Jean Piaget, and as the most cited living one.[1] Bandura is widely described as the greatest living psychologist,[2][3][4][5] and as one of the most influential psychologists of all time.[6][7] Personal life[edit] Bandura arrived in the US in 1949 and was naturalized in 1956.

Psychoanalysis Psychoanalysis is a set of psychological and psychotherapeutic theories and associated techniques, originally popularized by Austrian physician Sigmund Freud and stemming partly from the clinical work of Josef Breuer and others. Since then, psychoanalysis has expanded and been revised, reformed and developed in different directions. This was initially by Freud's colleagues and students, such as Alfred Adler and Carl Gustav Jung who went on to develop their own ideas independently from Freud. Later neo-Freudians included Erich Fromm, Karen Horney, Harry Stack Sullivan and Jacques Lacan. The basic tenets of psychoanalysis include the following: Under the broad umbrella of psychoanalysis there are at least 22 theoretical orientations regarding human mental development. Psychoanalysis has received criticism from a wide variety of sources. History[edit] 1890s[edit] The idea of psychoanalysis first started to receive serious attention under Sigmund Freud. 1900–1940s[edit] 1940s–present[edit]

programmed into us to create an attachment to their mother, for survial ( evolution) However if this doesn't happen to us in a critical period of time, it leads to long lasting cosequences in adulthood ( maternal deprevation) One of the cosewunces is psychpathy and lack of empathy. Evidence to support child wants to form attachment from monkey experiment by evonnekey Jan 23