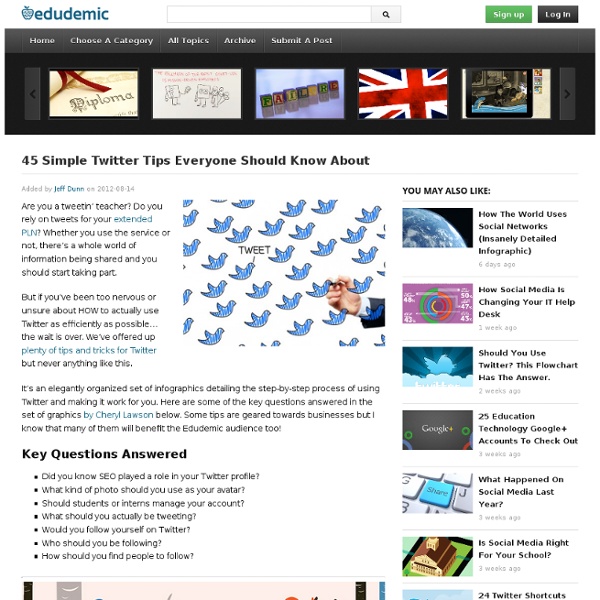 Are you a tweetin’ teacher? Do you rely on tweets for your extended PLN ? Whether you use the service or not, there’s a whole world of information being shared and you should start taking part. But if you’ve been too nervous or unsure about HOW to actually use Twitter as efficiently as possible… the wait is over. We’ve offered up plenty of tips and tricks for Twitter but never anything like this. It’s an elegantly organized set of infographics detailing the step-by-step process of using Twitter and making it work for you. Key Questions Answered Did you know SEO played a role in your Twitter profile? View Tips As Slideshow

25 Ways To Get The Most Out Of Twitter Twitter may very well be the single most important tool for teachers right now. Considering many are not even using the service, that says a lot about how effective the platform is for learning, engaging, development, and more. In an effort to make sure you are getting the most out of Twitter, we’ve compiled a very lengthy list of tips and tricks. That long list is coming out tomorrow morning but we thought you’d enjoy our hand-picked choices. See Also: 45 Simple Twitter Tips Everyone Should Know About

Our Guide to Twitter's Language The beauty and challenge of Twitter is stuffing your most sophisticated thoughts and feelings into a measly 140 characters (or less). Unfortunately, our traditional methods of communication have proven to be a poor training ground for micro-messaging, and even the most savvy platform users have sighed in exasperation as those bright red negative character signs mock our basic intelligence. But, perhaps even worse, no good tweet is ever going to be 140 characters because it’s impossible to share, respond or reference a tweet that’s already at it’s max.

How Instagram is Winning Gold at the 2012 Olympics [INFOGRAPHIC] Instagram has been the breakout social media star of the 2012 Summer Olympics. Users of the wildly popular mobile app have shared just over 100,000 photos from the Games over the past two weeks. Athletes post behind-the-curtain shots that give their followers previously unimaginable levels of Olympic access. What are some of the best uses for mobile devices in the classroom PhoneDog Media ExclusiveDownload iM5, now available in the App Store and Google Play. iM5 is a PhoneDog Media backed Social Platform to inspire real-life action through the crowdsourcing of ideas. See the video Like it or not, it's that time again. Schools across the nation are back in session (or will be soon enough) and it's time for students to get back into the learning, studying and testing mindsets. For some, that may be easier said than done. But for those of you going back to school this semester with a new mobile device, there are several ways you can incorporate your smartphone or tablet into your schooling routine.

100 Simple Ways To Effectively Use Twitter Twitter is too big to ignore. You see hashtags in commercials, sponsored tweets, posts, news broken on Twitter, etc. It’s quickly become an indispensable tool for teachers, admins, parents, and students too. Right now, there are still many (MANY) in education not using Twitter. They may think it’s tough to start using, difficult to monitor, and even a waste of time. 36 of Our Favorite #Education Hashtags - Getting Smart by Getting Smart Staff - edchat, edreform, EdTech Terry Heick at TeachThought recently published “The 20 Top #Hashtags in Education.” We liked it so much that we decided to compile our own list of favorites. (*Includes overlap from Heick’s list.)

How Churches Use Social Media [INFOGRAPHIC] Religion isn't a word often associated with technology — but it should be. Communication between religious organizations and their followers has blossomed on social media. Many churches have turned to social networks to increase their outreach to spread their teachings. Buzzplant, a Christian-based digital advertising agency, surveyed churches to see how they're using social media within their organization. More than 30% of churches surveyed said they update Facebook each day, while close to 15% said they never use the network.

Using Wall Wisher in the Classroom On Friday I ran a short workshop about using online tools to brainstorm with students. One of the resources that I shared and had folks try out was Wall Wisher. Although not the most robust tool for brainstorming, Popplet is currently my favorite, Wall Wisher is easy to use and seemed to be a hit with my audience.