HOW TO: Make a Finnish style log camp stove (9 Pic) 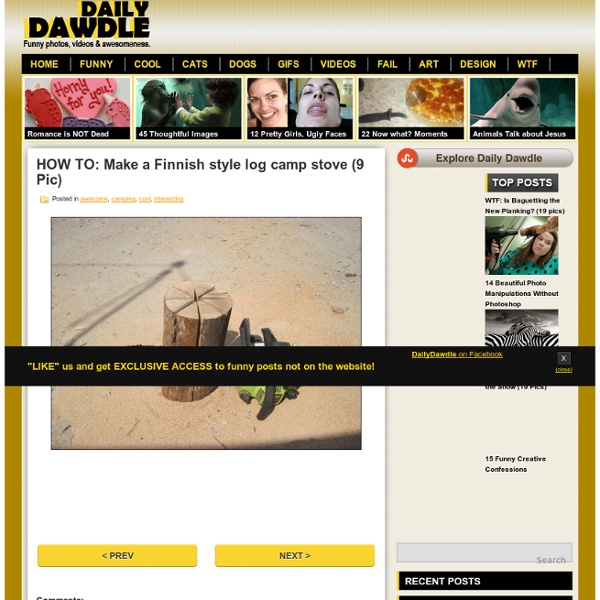 Heading Out on Your Own — Day 21: Know Your Way Around a Kitchen If there remains a lingering sense among older generations of men that cooking is “women’s work,” I would think it is probably fading greatly among the younger set. True, for much of human history men did the hunting/farming and women did the cooking, and this arrangement continued to work well into the 20th century. Young men made a quick transition from living with their flapjack-flipping mother, to settling down with a meatloaf-making wife.

Practical Survivor Urban survival is a tricky subject to discuss. There are advantages to urban survival. Anywhere you look there are items in trash cans and dumpsters that can be used to improve a survival situation. Cardboard boxes can be used for shelter, newspapers can be used for insulation and to the practical survivor another persons trash can be a treasure. In this case we will use a coffee can to build a stove. Whether you call it a hobo stove, can stove, or just a survival stove, this is a cheap effective way to both cook and stay warm. When Technology Fails by Matthew Stein Every time a disaster strikes, you see pictures of people walking down the road. Usually they are thirsty and hungry. Often they are cold, wet, injured, and sick.

How Lock Picking Works" Most people carry five to 10 keys with them whenever they go out. On your key ring you might have several keys for the house, one or two more for the car and a few for the office or a friend's house. Your key ring is a clear demonstration of just how ubiquitous lock technology is: You probably interact with locks dozens of times every week. The main reason we use locks everywhere is that they provide us with a sense of security. But in movies and on television, spies, detectives and burglars can open a lock very easily, sometimes using only a couple of paper clips.

Home Made - Lightweight Backpack Stove - Perma Pak Food Storage Home Made - Lightweight Backpack Stove Invented by: Unknown. Construction directions by: LaMar Kirby - Utah Lake District, Orem Ut. You can make this simple back packing stove with little cost ($0.25 US). This makes a great scout troop activity. Hotmail Hack Some people are intelligent - others are not. Here at [cwols] HQ, we wanted to know exactly what percentage of people are stupid. After much deliberation, we decided to experiment using the Internet as our test-bed. The Halcon Stove - survivalbiz.com Step 7. Take the bottom piece of the can and start to ruffle the perimeter of the can with your thumb. (Figure 10.) You don’t want creases, just ruffles. These ruffles are to allow the top portion of the can to fit over the bottom portion easily. Step 8.

untitled Tuesday, Sep 22, 2009 James, Going through some old gear last month, I found my food supply lists and notes from 1976-79. I thought the old list might be of interest and the lessons I learned during the first three years in the remote Alaska bush may be helpful to a few of your readers. I do not recommend Alaska for a TEOTWAWKI retreat but the lessons I learned the hard way may be helpful to any one in a cold climate. The Sietch Blog » Watercone – An Ingenious Way To Turn Salt Water Into Fresh Water The Watercone is an ingenious device that can take salty water and turn it into fresh water using only the power of the sun. The nice thing about this device is it is bone simple, uses the sun instead of fossil fuel, and is cheap to make and easy to use. The Watercone is surprisingly a cone, that you place over a pan of salty water (or over a marsh, or any damp ground) leave it out in the sun, water evaporates, the condensation trickles down the side of the cone, at the end of the day you flip it over, remove the cap at the top and drink the water. This device has the potential to really do a lot of good for a lot of people. So many people live in areas where the ground water has been polluted by salt incursion due to over pumping, or in areas that simply don’t have large fresh water sources (south pacific islands, sub-Saharan Africa, south-east Asia).

Making an Upside Down Fire The upside down fire technique rocks. It’s a cleaner burn with far less smoke and better combustion, gives off more heat, needs less tending and uses the embodied energy in wood more efficiently than the tipi-esque fire method. As an added bonus, the first time you make a fire like this in front of a ring of uninitiated folks, you exist in a ring of utter skepticism. Smart tips to make life easier - StumbleUpon Posted on February 24, 2012 in Humor If you’re new here, you may want to subscribe to our RSS feed or follow us on Facebook or Twitter . Thanks for visiting! Rate this Post (16 votes, average: 5.00 out of 5) Survival Smokers The following information comes from the US Army Survival Manual If the situation and time allow, you should preserve the extra meat for later use. If the air is cold enough, you can freeze the meat. In warmer climates, however, you will need to use a drying or smoking process to preserve it. One night of heavy smoking will make meat edible for about 1 week.