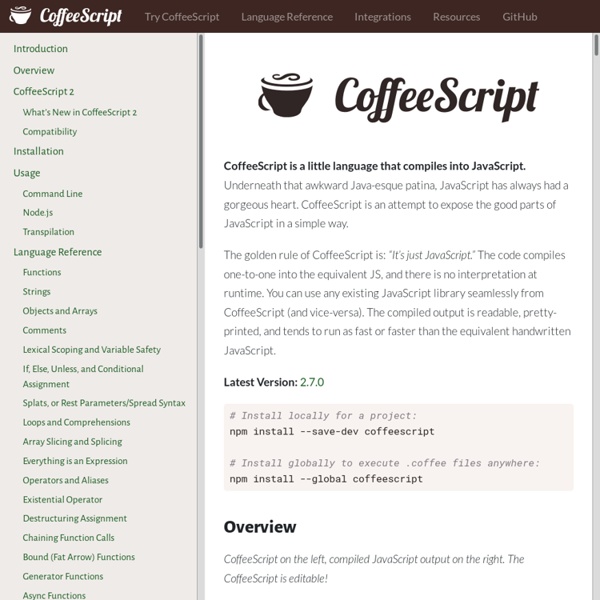 CoffeeScript is a little language that compiles into JavaScript. Underneath that awkward Java-esque patina, JavaScript has always had a gorgeous heart. CoffeeScript is an attempt to expose the good parts of JavaScript in a simple way. The golden rule of CoffeeScript is: "It's just JavaScript". The code compiles one-to-one into the equivalent JS, and there is no interpretation at runtime. You can use any existing JavaScript library seamlessly from CoffeeScript (and vice-versa).

Expanding Image Menu with jQuery In today’s tutorial we will create an expanding image menu with jQuery. The idea is to have some columns with black and white image slices that will make a content area slide out when we click on them. We will also slide in the colored version of the image, creating a neat […] View demoDownload source Ruby on Rails Tutorial: Learn Rails by Example Michael Hartl Contents Foreword My former company (CD Baby) was one of the first to loudly switch to Ruby on Rails, and then even more loudly switch back to PHP (Google me to read about the drama). This book by Michael Hartl came so highly recommended that I had to try it, and the Ruby on Rails Tutorial is what I used to switch back to Rails again. Founders who can't code An advise to founders who can't code If you are a business/idea guy and looking for a technical co founder, stop. Stop right now. Take 6 months off and go learn how to code (day and night, weekends including).

Practical Tips for Hiring Ruby Web Developers The topic of 'hiring' always generates a lot of discussion. And why not? Talking about hiring is a convenient way to pass judgment on large groups of people while keeping a professional, detached demeanor.. A jQuery Plugin That Rumbles Elements About The Plugin jRumble is a jQuery plugin that rumbles, vibrates, shakes, and rotates any element you choose. It's great to use as a hover effect or a way to direct attention to an element. Please read this before using jRumble. Flashing and flickering objects on the web can be dangerous. Circular Discography Template with jQuery Today we want to share a simple website template with you. The template will show some discography or music albums in a rounded fashion, rotating the albums when clicking on next or previous. When clicking on an album, we will open the album details view which contains a music player (jPlayer) and […] View demoDownload source Today we want to share a simple website template with you.