10 Reasons To Say NO To Animal Gifting Hunger Relief Organizations - Heifer International catalog During the holiday gift-giving season, a popular choice for gift-donations are programs that send live farm animals as “gifts” to help alleviate hunger and poverty in low-income countries. 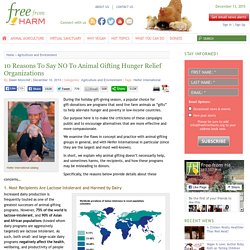 Our purpose here is to make the criticisms of these campaigns public and to encourage alternatives that are more effective and more compassionate. We examine the flaws in concept and practice with animal-gifting groups in general, and with Heifer International in particular (since they are the largest and most well-known). In short, we explain why animal gifting doesn’t necessarily help, and sometimes harms, the recipients, and how these programs may be misleading to donors. Specifically, the reasons below provide details about these concerns… Animal gifting programs promote dairy production in populations that are largely lactose intolerant. Vegan Leaders. On comparing animal rights with other social justice issues. Vegans and animal rights activists often draw comparisons between the animal rights movement and other social justice movements, like the anti-slavery campaigns, women’s liberation etc. 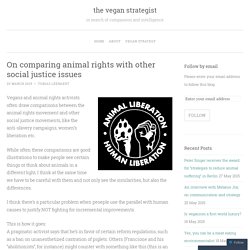 While often these comparisons are good illustrations to make people see certain things or think about animals in a different light, I think at the same time we have to be careful with them and not only see the similarities, but also the differences. I think there’s a particular problem when peoeple use the parallel with human causes to justify NOT fighting for incremental improvements. This is how it goes: A pragmatic activist says that he’s in favor of certain reform regulations, such as a ban on unanesthetized castration of piglets. Others (Francione and his “abolitionists”, for instance) might counter with something like this (this is an actual quote from someone): Would anyone advocate for the abolition, or the regulation, of child sex slavery? Like this: Like Loading...

- Beyond Carnism // Changing the Way We Think About Eating Animals. What Is Carnism? 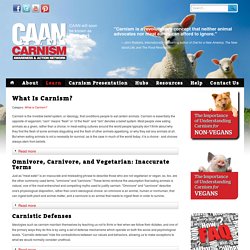 Category: What is Carnism? Carnism is the invisible belief system, or ideology, that conditions people to eat certain animals. Carnism is essentially the opposite of veganism; “carn” means “flesh” or “of the flesh” and “ism” denotes a belief system. An interview with Melanie Joy, on communication and strategy. In 2013 I did this interview with Melanie Joy (it wasn’t published previously). 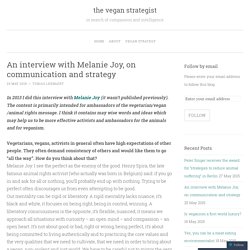 The content is primarily intended for ambassadors of the vegetarian/vegan/animal rights message. I think it contains may wise words and ideas which may help us to be more effective activists and ambassadors for the animals and for veganism.Vegetarians, vegans, activists in general often have high expectations of other people. They often demand consistency of others and would like them to go “all the way”. How do you think about that? Melanie Joy: I see the perfect as the enemy of the good. It’s a matter of focus? How can we express appreciation for the steps some people have already taken, while at the same time encouraging them to take further steps? What about people calling themselves vegetarian when they aren’t really vegetarians.

What if the “most good you can do” is to help animals? The idea of “effective altruism” — giving from the head, not the heart, to do as much good as possible — is gathering attention these days. 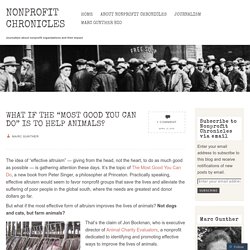 It’s the topic of The Most Good You Can Do, a new book from Peter Singer, a philosopher at Princeton. Practically speaking, effective altruism would seem to favor nonprofit groups that save the lives and alleviate the suffering of poor people in the global south, where the needs are greatest and donor dollars go far. But what if the most effective form of altruism improves the lives of animals? FARM - About. About FARM Farm Animal Rights Movement (FARM) is a 501(c)(3) national nonprofit organization working to end the use of animals for food through public education and grassroots activism. 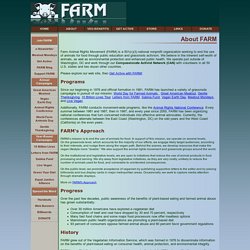 We believe in the inherent self-worth of animals, as well as environmental protection and enhanced public health. We operate just outside of Washington, DC and work through our Compassionate Activist Network (CAN) with volunteers in all 50 U.S. states and two dozen other countries. Please explore our web site, then Get Active with FARM! Programs Since our beginning in 1976 and official formation in 1981, FARM has launched a variety of grassroots campaigns in pursuit of our mission: World Day for Farmed Animals , Great American Meatout, Gentle Thanksgiving, 10 Billion Lives Tour, Letters from FARM, Sabina Fund, Vegan Earth Day, Meatout Mondays, and Live Vegan. Animal Charity Evaluators. ACE reviews evidence on the efficacy of interventions in animal advocacy in order to help determine which are likely to be most useful. 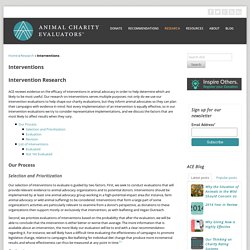