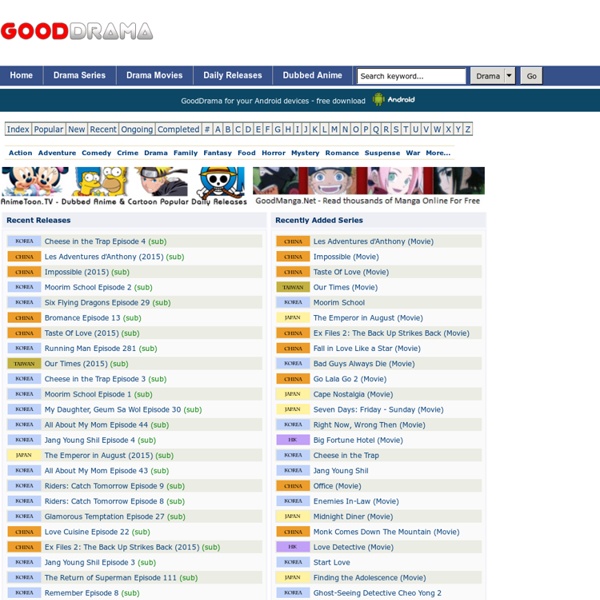 CAUSATIVE AND PASSIVE Posted by Tae Kim We will now learn the last two major types of verb conjugations: causative and passive forms. These two verb conjugations are traditionally covered together because of the notorious causative-passive combination. We will now go over what all these things are and how they are used. Causative Verbs Vocabulary Queen Insoo Downloads, Download Queen Insoo Korean Drama Free HD Queen Insoo Korean Drama English Sub Download Synopsis: The life of Queen Insoo from her childhood to adulthood as she ruled Joseon alongside her mother-in-law, Queen Jeonghee. The drama spans from King Moon Jong to Yeon San, Insoo’s grandson.

Backlash against Miyazaki is generational If you haven’t lived in Japan, it’s hard to appreciate just how beloved are anime maestro Hayao Miyazaki and his creative hub, Studio Ghibli. Annual surveys of Japanese consumers often find that Ghibli is their favorite domestic brand, ahead of stalwarts such as Toyota and Sony. Miyazaki’s animated epics regularly top the domestic theatrical market. “Kaze Tachinu” (“The Wind Rises”), his latest film — loosely based on the life of engineer Jiro Horikoshi, designer of Japan’s wartime Zero fighter plane — soared above its box office rivals for seven consecutive weeks after its July release. Meanwhile, his Oscar-winning “Spirited Away” (2001) remains the top-grossing film in Japanese history, knocking aside Hollywood live-action contenders such as “Titanic” and the “Harry Potter” films.

Goddess of Fire Also known as:불의 여신 정이 / Bulye Yeoshin Jung Yi The Goddess of Fire, Jung Yi A Historical drama about Yoo Jung, also known as Jung Yi, the first female potter in the Joseon Dynasty and regarded as the dojo of Shintaro porcelain. ‘Yoo Jung’ is based on the real historical figure ‘Baek Pa Sun’, the lady porcelain maker who lived a life of an intense love and artistic spirit. The Japanese Slang Jiko undefined The Japanese Slang Jisho 最 高君の俗語の辞書HOMEPAGE ABAYO >> Informal term for "good bye", this is not considered a polite way to say goodbye. ABUNE >> Slang, this is an exclamation take from "abunai".

Queen Insoo Episode 1 Queen Insoo Episode 1 Episode 1 Category: Queen Insoo Play Coolest Traveling » The Best Japanese Slang Dictionary Online elcome to the premier dictionary of Japanese slang and colloquialism! Below you will find an update-to-date collection of colloquial expression, dialects, borrowed phrases, and pure, modern slang. Enjoy! P.S. Errors including typos and definitions are also welcome! A Guide to Joseon Hairstyles and Headgears I think it’s about time to edit this post to add several types of other hairstyles and headgears. The hairstyles and headgears used during Joseon Dynasty were from the dynasties preceding it such as Three Kingdoms Period and Goryeo Dynasty and also with influence from China’s dynasties. Here’s a post to list down mostly, if not all, the hats, headgears, and ornaments worn by the Joseon people. With reference to the dramas, I think it will be easier for us to see how the headgears and hairstyles look like. There are several hairstyles that dated back to dynasties before Joseon Dynasty and continued to be widely used among the Joseon people.

Best site ever for Asian dramas, shows, movies, so your all in touch with updates,just keeps your couch warm with kimchi. by debrahbendict Jan 30