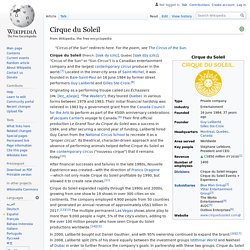 It is the largest theatrical producer in the world.[2] Based in Montreal, Quebec, Canada, and located in the inner-city area of Saint-Michel, it was founded in Baie-Saint-Paul in 1984 by two former street performers, Guy Laliberté and Gilles Ste-Croix.[3] Initially named Les Échassiers ([lez‿e.ʃa.sje], "The Waders"), they toured Quebec in 1980 as a performing troupe. Their initial financial hardship was relieved in 1983 by a government grant from the Canada Council for the Arts, as part of the 450th anniversary celebrations of Jacques Cartier's voyage to Canada.[4] Le Grand Tour du Cirque du Soleil was a success in 1984, and after securing a second year of funding, Laliberté hired Guy Caron from the National Circus School to re-create it as a "proper circus".

Each show is a synthesis of circus styles from around the world, with its own central theme and storyline. Origins[edit] Opera buffa. Opera buffa (pronounced [ˈɔːpera ˈbuffa]; plural: opere buffe; Italian for "comic opera") is a genre of opera. 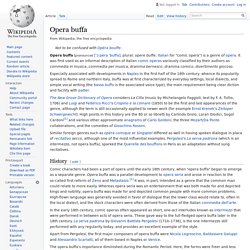 It was first used as an informal description of Italian comic operas variously classified by their authors as commedia in musica, commedia per musica, dramma bernesco, dramma comico, divertimento giocoso. Especially associated with developments in Naples in the first half of the 18th century, whence its popularity spread to Rome and northern Italy, buffa was at first characterized by everyday settings, local dialects, and simple vocal writing (the basso buffo is the associated voice type), the main requirement being clear diction and facility with patter. History[edit] Comic characters had been a part of opera until the early 18th century, when "opera buffa" began to emerge as a separate genre. In the early 18th century, comic operas often appeared as short, one-act interludes known as intermezzi that were performed in between acts of opera seria.

They’re commonly shows that integrate a story with music, range from 30 minutes to three hours and are presented in two acts. They differ from opera by being sung in the audience’s native language and generally incorporating acting, dancing and singing equally. In opera singing is the priority, operas generally employ singers not actors. Musicals originated in ancient Greece where music and dance were included in light comedies and tragedies. The Romans continued this tradition, also introducing a form of tap shoe to make their dance steps more audible in auditoriums. Comic operas and ballad operas, like John Gay’s The Beggar’s Opera (1728) became popular in the 18th century. Music halls, melodrama, burlesque, vaudeville and operette also developed during the 18th century. Gilbert and Sullivan were the first authors in Britain to write musical stage works (1871 to 1896).

The British Music Hall. A History of The Musical by John Kenrick (The images below are thumbnails – click on them to see larger versions.) 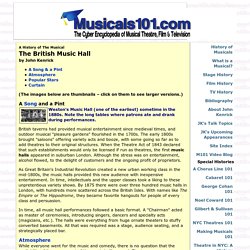 A Song and a Pint Weston's Music Hall (one of the earliest) sometime in the 1880s. Note the long tables where patrons ate and drank during performances. British taverns had provided musical entertainment since medieval times, and outdoor musical "pleasure gardens" flourished in the 1700s. As Great Britain's Industrial Revolution created a new urban working class in the mid-1800s, the music halls provided this new audience with inexpensive entertainment. 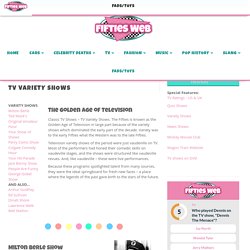 The Fifties is known as the Golden Age of Television in large part because of the variety shows which dominated the early part of the decade. Variety was to the early Fifties what the Western was to the late Fifties. Television variety shows of the period were just vaudeville on TV. Most of the performers had honed their comedic skills on vaudeville stages, and the shows were structured like vaudeville revues. Because these programs spotlighted talent from many sources, they were the ideal springboard for fresh new faces – a place where the legends of the past gave birth to the stars of the future. Milton Berle Show BUY on DVD The Milton Berle Collection Milton Berle Show Texaco Star Theater Buick-Berle Show Milton Berle Starring in the Kraft Music Hall Call him Mr.