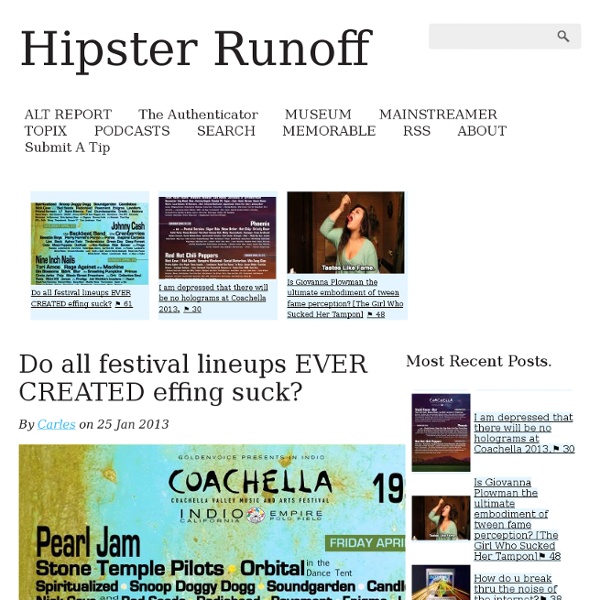 I went to the old scene spot And saw the same scene faces A few years older Still wearing stupid clothes Still looking proud Is the scene still alive? Was I the one who was alive? Or was I just naive feelings of youth, hope, a better tomorrow manifesting itself in my arbitrary cultural immersion But the scene still looks the same The scene children are still around They are still talking about things tangentially related to the commercial arts Have you heard the band?

this song is sick Posted in Bangin, Video by nick | Tags: 2014, Chance the Rapper, Hip-Hop, LIVE, Lollapalooza Chance the Rapper made a legendary return to his home city of Chicago after gaining a monstrous global following as he played a huge set at the trend setting Lollapalooza music festival. This Sunday's set was a very special one for the rapper as him and his Social Experiment band went through an impressive collection of all the favorites from his popular mixtapes and even managed to slip in a few unreleased new tracks. This was truly something special as the love for his home city resulted in some unreal chemistry. Enjoy! Chocolate Basil Cake + $50 Williams Sonoma Gift Card Giveaway [Contest Closed] Basil is usually treated as a two dimensional commodity, which is upsetting for our sensitive friend. It’s the shining star in pesto, the uniting factor in the group of pine nuts and Parmigiano, and trying to make caprese without basil is trying to conduct a chorus without harmony. It’s like John Daker singing “Amore.”

Electronic Green Velvet Bigger Than Prince (Martinez Brothers Remix) Chris and Steve Martinez or The Martinez Brothers as they’re known to the rest of the world, although looked upon by much of mainstream music media stateside as relative new comers to the powerplay pantheon of house DJ’s and producers, have been infusing the club scene with some of its most defining tunes and adorning magazine covers since they were barely teenagers. On the heels of an incredible 2013 which saw them author their first Essential Mix for BBC Radio 1, a globally viral remix of Green Velvet’s “Bigger Than Prince” (which you can stream below) and hold down one of Europe’s hottest club residencies at Ibiza’s Circoloco; we had a chance to chat up the hottest duo in club land about their current American tour, future hip-hop productions, their recent monster Coachella performance and working with Seth Troxler. The Music Ninja (TMN): Thanks so much for taking a second to answer a couple of questions for The Music Ninja.

Flaky Tart Crust Recipe The fat in our tart dough is mostly butter with a little shortening. Many people think that an all-butter crust is the goal. But even Julia Child, America’s foremost champion of butter, recommends making crusts with a combination of butter and shortening. Butter for its inimitable flavor, and shortening because that’s what makes a crust flaky. Do you know what kvass is? It’s a weird word, I know. Kvass or as we call it in Lithuanian “gira” (G like good not gin) is natural drink made by fermenting bread, berries, caraway seeds or honey, by adding sugar, yeast or natural ferment. It’s a very old drink, ancient in a way, which became particularly popular in the XVI century and was consumed by anyone from country folk to dukes.

Traveling in Italy: Sfingi, Sicilian Puff Pastry Fritters When you notice that everywhere you step on outside your house seems to have developed colored spots, it doesn't mean that the cleaners left on a holiday altogether nor there's a new city-wide fad of polka-dotted flooring. It just means that Carnevale (Carnival or Mardi Gras) is just around the corner. This is also my reminder that it's time to hit the stores and do my share of the Carnevale festivities. Take my kids out costume hunting along with the other hundred parents and kids looking for the same thing. Tiramisu ice cream tiramisu ice cream This is one of my recipes published in the February edition of Oprah magazine as part of the main food feature on ice cream. I have had a love affair with ice cream for 20 years which started when I first left South Africa to travel the world and realised what real super premium ice cream was all about. Its the reason I bought a semi industrial Italian ice cream machine, and why I love playing around making various frozen desserts. I would not attempt to make it without one, but have included a method if you have the time and patience.

Brazilian coffee cocktail Lately I am a magnet for minor and intermediate disasters, actually I always had been but things are escalating. Sometimes I believe bad things just happen to me but at the end it is how it is, this is me and I should come with a warning. Just a list of last days debacles: I broke three glasses, of cause the expensive ones and every day one because it’s so much fun to clean the floor. If I look on my left hand, I can see two cuts slowly healing, still love sharp knifes. I bought bad milk and realized it too late. Disgusting!

PPQ: Texas Tortilla Soup Amanda chose this week’s Project Pastry Queen challenge: Texas Tortilla Soup. I was super happy to put this on the menu this week. One, our oven is broken (waaah!) Caramel Sauce Recipe Method 1 First, before you begin, make sure you have everything ready to go - the cream and the butter next to the pan, ready to put in. Making caramel is a fast process that cannot wait for hunting around for ingredients. If you don't work fast, the sugar will burn. salted caramel mocha I didn’t do a dang thing to make this drink healthified. No natural sweeteners. No low-fat whipped cream. No chia seeds. No whole grains. No protein powder.

Infuse Your Booze: 5 Easy Steps to Better Flavored Vodka (or Gin, or Tequila) Photo by Joanna Sciarrino Often when we crave a sweet, refreshing summer cocktail, we end up stuck with some cloying fruity bottled mix (or frozen-concentrate mix) made from artificial everything. This is thanks to our own laziness, a friend’s, or a bartender who doesn’t know any better.

creamy tomato soup I have a secret pleasure. One that I am about to announce to the internet. I… ready for this? Love… brace yourself… Okay, here goes… Campbell’s Tomato Soup. Yep, the condensed kind that glops into the pot still in the shape of the can.