Is this $100 Nonstick Pan Really the Best? — The Kitchen Gadget Test Show. Koizumi Japanese Toaster Oven with Fried Egg Function. This Lightweight Frypan and Plate Combo Lets You Cook on the Go. Brava Oven Review: A Smart Home Triumph That Takes the Fun Out of Cooking. How to Treat a Cast-Iron Pan. Having Problems Seasoning a Cast-Iron Skillet? Try This. During a conversation about his new 8-inch cast-iron skillet, Isaac Morton told me I’ve been seasoning my cast-iron skillets wrong. 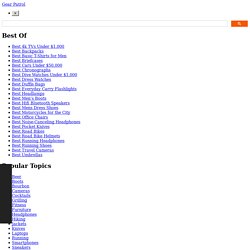 According to Morton, founder and President of the Charleston, South Carolina cookware company, seasoning skillets in the oven is the slowest and least effective option you’ve got to get an even, well-coated seasoning. “In my opinion, when you’re seasoning in the oven you’re just protecting the skillet from rust and the elements,” Morton said, “other than cooking in it over and over again, what we call stovetop seasoning is the better method of seasoning.”

Best Air Fryer Recipes. Once upon a time, eating cleaner meant cutting back on hash browns, fried chicken, and doughnuts. 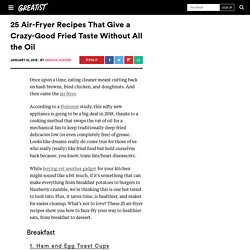 And then came the air fryer. According to a Pinterest study, this nifty new appliance is going to be a big deal in 2018, thanks to a cooking method that swaps the vat of oil for a mechanical fan to keep traditionally deep-fried delicacies low (or even completely free) of grease. Looks like dreams really do come true for those of us who really (really) like fried food but hold ourselves back because, you know, trans fats/heart disease/etc. While buying yet another gadget for your kitchen might sound like a bit much, if it’s something that can make everything from breakfast potatoes to burgers to blueberry crumble, we’re thinking this is one hot trend to look into. 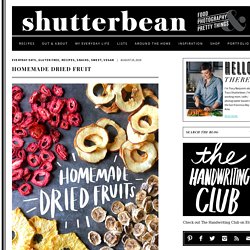 Have you wanted to? Well then, let me show you a fun weekend project for you! Did you say hello to my Nesco dehydrator. How to Season a Wok and Daily Wok Care - The Woks of Life. If you have read our post, “What is the best wok to buy?” 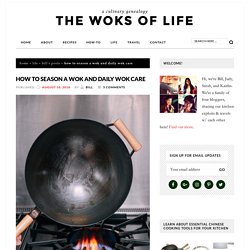 You now know that our personal preference here at The Woks of Life is a classic carbon steel wok, and you may have even gone out and purchased one. While we think carbon steel is the best all-around wok, it’s important to know how to season a wok. Most carbon steel woks do require a seasoning process before the first use and continued care and maintenance to build that perfect nonstick patina. Basic carbon steel wok models typically range from 12 to 14 to 16 inches in diameter and are made with 14 gauge steel, which is about 1.6mm thick. Most basic carbon steel woks made for home use have a long wood handle on one end and a wooden helper handle on the other so you can use two hands to lift the wok. The Kombuis is a Compact All-in-one Camping Cooking Set.

The Suvie Automated Fridge and Stove Cooks Entire Meals in One Go. Tovala - Smart oven and companion meal delivery service. These coffee cups are made from coffee. By Starbucks' own admission, it goes through approximately 4 billion disposable paper coffee cups every year – and that's just one company. 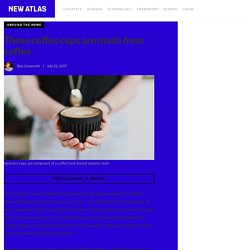 If java consumers want to reduce that sort of waste, they can of course bring their own reusable cup to the coffee shop. Australian startup Huskee is taking things a step further, however. Its reusable cups are actually made from unwanted coffee bean husks. Cinder Grill: Countertop Sous Vide. Farm 432: The handy kitchen appliance that breeds fly larva for protein. Flies are usually considered unwelcome guests in the kitchen, but one industrial designer is aiming to turn them into a renewable food source. 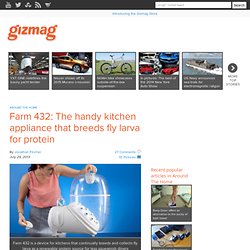 Katharina Unger's Farm 432 concept is a fly-breeding device for home use that continually collects fly larva as a protein source for less squeamish diners. As unappetizing as it may sound, the designer hopes that convincing the Western world to add insects to its diet could help increase the planet's overall food supply. View all Unger, an industrial design student at the University of Applied Arts Vienna, devised her concept of a self-contained fly larva farm as an alternative to factory livestock. According to her research, meat production will need to rise by 50 percent before the year 2050 to accommodate the world's growing population, which could in turn put a strain on croplands and the Earth's climate.

How to Deglaze a Pan. Immersion Blenders Can Be Danger in Disguise. Tony Cenicola/The New York Times The sound was coming from my mouth. 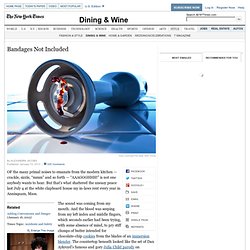 And the blood was seeping from my left index and middle fingers, which seconds earlier had been trying, with some absence of mind, to pry stiff clumps of butter intended for chocolate-chip from the blades of an immersion blender. Diners' Guide Rates Working Conditions Inside Restaurants : The Salt. Hide captionCulinary student Nadya Dunkley cooks chicken at Colors Restaurant in New York. 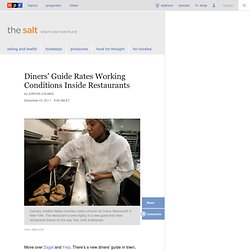 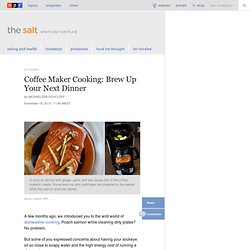 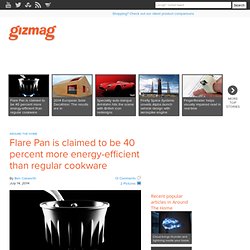 Thomas Povey was on a mountaineering trip several years ago, he became acutely aware of how much fuel was required to boil water using his conventional cookware. This inspired the professor of engineering to develop a new type of cooking pan, that would make better use of available heat. The result is the "finned" Flare Pan, which requires 40 percent less heat than a regular pan to get just as hot. When Povey and colleagues tested traditional pans on a gas range, they noticed that much of the heat from the flame simply went up the sides of the vessel and into the air. Drawing on technology developed to dissipate heat in jet engines, the fins built into the sides of the Flare Pan served to absorb much of that previously-wasted heat. This Video Will Give You a New Appreciation For Cast Iron Skillets. MINIPRESSO - Hand powered portable espresso machine. Pantelligent is one smart frying pan. Cooking can be hard. The team at Pantelligent are aiming to make the process a little easier, though, by allowing users to connect their "smart" frying pan to a smartphone to monitor temperature and cook time ... taking the guesswork out of pan cooking.

View all The app is the key to Pantelligent. It features dozens of recipes for things like salmon, bacon, and other foods that are traditionally made on a cook top. 5 Best Lunch Boxes for Men. When you only need to click a picture of a roast turkey sandwich to get it delivered to your office, it can be difficult to consider an alternative. That mystery meat sandwich may be tasty (and it got here in 15 minutes!) , but making a meal yourself can save money and give you more control over eating healthy. Cinder Sensing Cooker. Product - Roccbox. Roccbox is a portable, compact and lightweight stone bake oven. Roccbox is a rock in a box that produces astounding cooking results. Capable of cooking virtually any type of food, on the move, Roccbox is compact enough to carry, yet large enough to cook a 12 inch pizza in just 90 seconds.

Top 3 Best Slow Cooker Reviews – Kitchen Chatters. Do you think slow cookers are a bit old fashioned? Maybe you have not-so-fond memories of the out-dated (even back then) slow cooker that once sat in your mother’s or grandmother’s kitchen when you were a kid. Well, slow cookers have come a long way since then. And modern versions of this kitchen classic are extremely convenient. Huffingtonpost. Why the 'Kitchen of the Future' Always Fails Us. 10 Easy Pieces: Modular Kitchen Workstations: Remodelista.