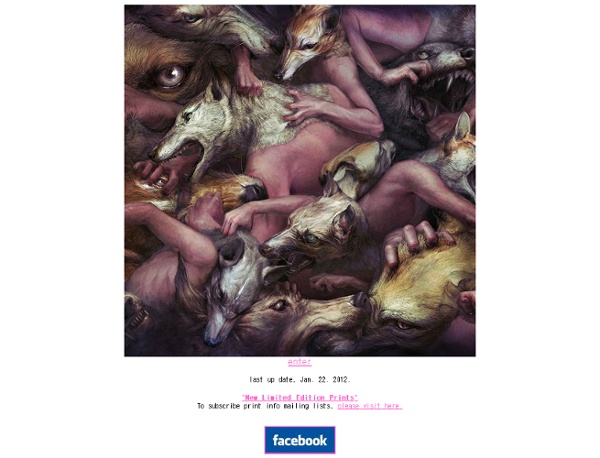 MIZUMA ART GALLERY : KONOIKE Tomoko / 鴻池朋子 鴻池 朋子 ⁄ KONOIKE Tomoko Born in 1960 in Akita, Japan. Lives and works in Tokyo, Japan. Received B.A., in Japanese Traditional Painting, Tokyo National University of Fine Arts and Music. Worked as a toy and furniture designer. Solo Exhibitions Wei Wei Gallery The voguish and gaudy single girl image in my works represents a whole group in our society, namely youngsters around their puberty. They regard themselves as matur and start to get some clue of life, in this age they tend to be most vulnerable to cultural heresies. 1972 Born in Qi Xian, Shanxi Province. 1997 Graduated from Oil Painting Department of Beijing Institute of Education with Master’s Degree; Now he works and lives in Beijing.

This Entire Animation Was Drawn Frame by Frame on a Gallery Wall Artist Caleb Wood created this impressive animation that he drew frame by frame on a wall at Prøve Gallery in Duluth, Minnesota. Titled Plumb, he refers to the piece as a “gallery animation installation.” Wood graduated from RISD in 2011 with a BFA in Film, Animation, and Video (a department headed by Dennis Hlynsky) and has gone on to show his work internationally. You should also check out his other recent animation project Goodbye Rabbit, Hop Hop. Art21 . Ursula von Rydingsvard Marina Abramović was born in Belgrade, Yugoslavia in 1946. A pioneer of performance as a visual art form, Abramović has used her body as both subject and medium of her performances to test her... Robert Adams was born in Orange, New Jersey, in 1937.

New Photorealistic Illustration Videos of Everyday Objects by Marcello Barenghi Since we last visited with Italian illustrator and graphic designer Marcello Barenghi last year, his wildly popular YouTube channel has gone into overdrive with a new photorealistic drawing tutorial almost every week. From soda cans and body parts to games and insects, he skillfully renders each piece using colored pencils and markers resulting a final object that looks like it could be grabbed right off the page. See more of his 150+ drawings right here.

A Conversation with Ursula von Rydingsvard I first heard of Ursula von Rydingsvard from my friend Jane Rosen. "She's a great artist," she told me. "You should interview her." But Ursula lives in New York and I had my hands full in the Bay Area. It didn't seem likely to happen. Then one day I got a call from Jane— Ursula would be in San Francisco to give a talk at the Art Institute.