How to build an app 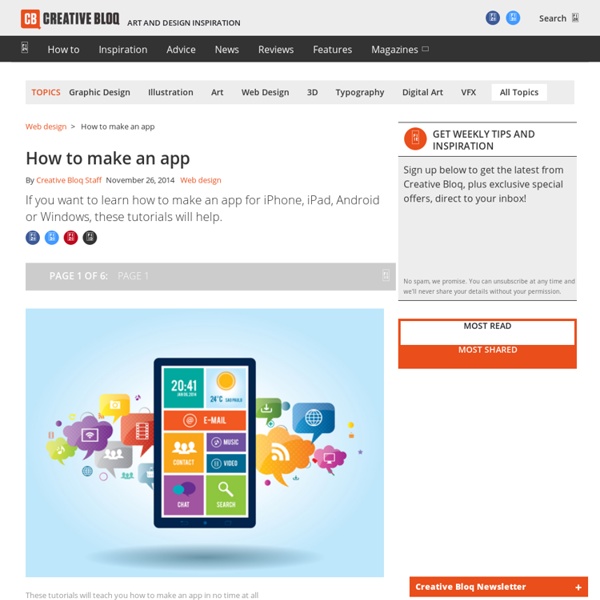 You've got a great idea but you need some help – discover how to make an app for Android, iOS or Windows with these easy-to-follow tutorials for everyone from amateurs to pros. In a world where smartphone use is rising exponentially, the opportunities to make a name for yourself, not to mention a ton of money, by turning your app idea into reality are huge. So whether you're building for Android or iOS, there are several tutorials here to help you. We start with Android... How to make an Android app Interactive Android tutorial Teaching technology via app development, Codelearn offers this interactive Android tutorial, in which you will learn how to build a full fledged Twitter Android app. Building your first Android app This tutorial teaches you how to build your first Android app. Develop an Android app: video tutorials This handy 'playlist' of Android development tutorials will take you through everything from downloading the SDK to putting your app on the market.

Learn Play, Design & Code Retro Arcade Games Grades 2+ | Blocks CS First Unplugged Grades 2-8 | Blocks, Unplugged, Scratch Discover Python with Silent Teacher sass_and_less_compared.markdown Sass/Less Comparison In this document I am using Sass's SCSS syntax. You can choose to use the indented syntax in sass, if you prefer it, it has no functional differences from the SCSS syntax. For Less, I'm using the JavaScript version because this is what they suggest on the website.

Google releases set of beautiful, freely usable icons They're licensed CC-BY-SA and designed for use in mobile apps and other interactive stuff -- there's 750 in all! It's part of Google's Material Design project. Material Design Icons (via Kottke) Building fast and responsive websites This excerpt is Chapter 4 of the HTML5 Mobile Development Cookbook by Shi Chuan, out at Packt Publishing. On mobile devices, bandwidth is not always as good as on a desktop computer. If you are on a slow 3G network, things can get loaded much slower than on a Wi-Fi hotspot. Even for Wi-Fi connections, many mobile browsers process slower than desktop computers. Speed Up Your Site with Delayed Content Speed remains one of the most important factors influencing the success of any website, and the first rule of performance (according to Yahoo!) is reducing the number of HTTP requests. Over the last few years we’ve seen techniques like sprites and combo CSS/JavaScript files used to reduce the number of HTTP requests. But there’s one area where large numbers of HTTP requests are still a fact of life: the small avatars attached to the comments on articles like this one. Avatars Many sites like 24 ways use a fantastic service called Gravatar to provide user images.

8 Tools For Easily Creating a Mobile Version of Your Website This post originally appeared on the American Express OPEN Forum, where Mashable regularly contributes articles about leveraging social media and technology in small business. As an entrepreneur, you're most likely always on the lookout for new developments. Perhaps your customers are reporting that your site needs a mobile version so that they can visit it while they're on the go, or maybe you recently saw a competitor's site through your mobile device; it looked slick, and now you're feeling outclassed. The mobile web is burgeoning. Usage of iOS, the operating system for Apple mobile devices such as the iPhone and iPad, almost doubled in just seven months (from March 2010 to October 2010), according to Netmarketshare.

Tools for Formatting, Organizing and Sorting CSS Code If you are an uber-experienced web designer, you probably won’t have this problem. Your CSS files will be structured coherently and concisely, every selector will have been attentively placed, every property will be perfectly formatted… basically, your CSS will look like carefully crafted art. If this describes you, then move along please, this post is not for you. But if you are one of the 99.9% of web designers out there that work with CSS on a regular basis, it is for you. You know how it goes, you start a new web project with a barebones CSS file, and as you build the site your CSS grows rapidly with it. Projects Overview - Microsoft Research FUSE Labs At FUSE Labs we always have several projects in various stages. We're always looking to learn more about how users interact and how social networking can solve real-world problems. Xim Share your photos, not your phone with Xim. Swipe, pan, and zoom through photos with friends or on the big screen.

WPF « Sacha's blog The other day we had a requirement to style a ContextMenu for our large WPF app. Now this sounds easy enough to do, and there are even some pointer on a Microsoft site which show you the alleged Styles applied to the standard controls, for the ContextMenu though, the example on the Microsoft site which is as follows: Turned out to be way wrong, you can clearly see that the screen shot below which uses the standard ContextMenu with no additional styling has a ScrollViewer to present items that do not fit in a certain amount of space.

Styling A ScrollViewer/Scrollbar In WPF « Sacha's blog A while back I was looking at the Infragistics WPf showcase, Tangerine and I was quite jealous about the scrollbars that they managed to use. I mean styling a Button is one thing, but the ScrollBar is made of lost of nasty different control parts, (Part_XXX elements). Incidently I wrote an article about Part_XXX elements in a WPF article over at codeproject right here if you are interested. Anyways to cut a long story short I decided to try and have a go at Styling a bigger control such as ScrollViewer.