KIDS & BLITZ: a complete unit for ESL learners! By goodmorningmiss 》KIDS & BLITZ《This unit was designed to teach your students about the Second World War and more especially children being evacuated to the British countryside and to make them progress in English, both oral and written.Included:❑ How to use these documents, other links and suggestions;❑ Instructions for the final task (both in French and English);❑ A strong and vast cultural contribution (main events, dates and leaders of the WWII, evacuees…);❑ Worksheets in PDF and Powerpoints;❑ Authentic documents (audio and texts);❑ Methodology: how to write a letter;❑ Grammar: the passive voice, the obligation, interdiction and advice in the past, the present perfect tense…❑ Work on a song and authentic propaganda posters;❑ Different levels of difficulty to include all of your students;❑ The keys to all the documents;❑ Reading, writing, listening and talking! 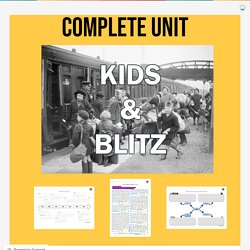 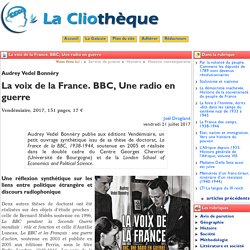 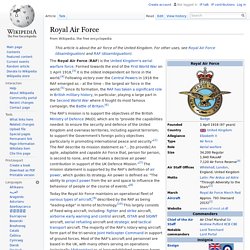 Formed towards the end of the First World War on 1 April 1918,[3] it is the oldest independent air force in the world.[4] Following victory over the Central Powers in 1918 the RAF emerged as – at the time – the largest air force in the world.[5] Since its formation, the RAF has taken a significant role in British military history, in particular, playing a large part in the Second World War where it fought its most famous campaign, the Battle of Britain.[6] History[edit] Origins[edit] 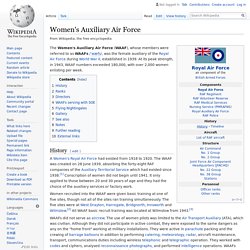 At its peak strength, in 1943, WAAF numbers exceeded 180,000, with over 2,000 women enlisting per week. History[edit] A Women's Royal Air Force had existed from 1918 to 1920. The WAAF was created on 28 June 1939, absorbing the forty-eight RAF companies of the Auxiliary Territorial Service which had existed since 1938.[1] Conscription of women did not begin until 1941. It only applied to those between 20 and 30 years of age and they had the choice of the auxiliary services or factory work. Women recruited into the WAAF were given basic training at one of five sites, though not all of the sites ran training simultaneously. Air Force nurses belonged to Princess Mary's Royal Air Force Nursing Service instead. WAAFs were paid two-thirds of the pay of male counterparts in RAF ranks. Ranks[edit] Directors[edit] Notes[edit]

Primary History - World War 2 - The war effort. What was the blitz? An air raid siren will play automatically on this page. 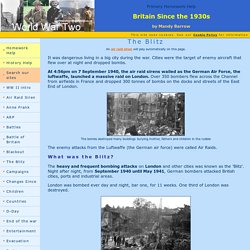 It was dangerous living in a big city during the war. Cities were the target of enemy aircraft that flew over at night and dropped bombs. Identity cards (ID Cards) war. War Campaigns and Posters. The war meant that many things were limited. 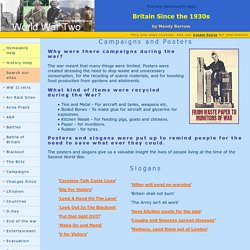 Posters were created stressing the need to stop waste and unnecessary consumption, for the recycling of scarce materials, and for boosting food production from gardens and allotments. • Tins and Metal - For aircraft and tanks, weapons etc. . • Boiled Bones - To make glue for aircraft and glycerine for explosives. Rationing in Britain during World War 2. During World War II all sorts of essential and non-essential foods were rationed, as well as clothing, furniture and petrol. 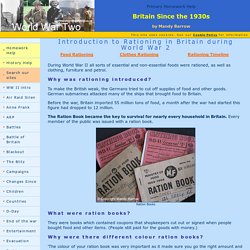 To make the British weak, the Germans tried to cut off supplies of food and other goods. German submarines attacked many of the ships that brought food to Britain. Before the war, Britain imported 55 million tons of food, a month after the war had started this figure had dropped to 12 million. The Ration Book became the key to survival for nearly every household in Britain. Every member of the public was issued with a ration book. Ration Books They were books which contained coupons that shopkeepers cut out or signed when people bought food and other items. War Campaigns and Posters. The Blitz. The Blitz was a German bombing campaign against Britain in 1940 and 1941, during the Second World War. 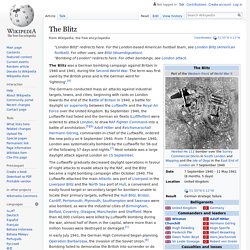 The term was first used by the British press and is the German word for 'lightning'.[4] The Germans conducted mass air attacks against industrial targets, towns, and cities, beginning with raids on London towards the end of the Battle of Britain in 1940, a battle for daylight air superiority between the Luftwaffe and the Royal Air Force over the United Kingdom. By September 1940, the Luftwaffe had failed and the German air fleets (Luftflotten) were ordered to attack London, to draw RAF Fighter Command into a battle of annihilation.[5][6] Adolf Hitler and Reichsmarschall Hermann Göring, commander-in-chief of the Luftwaffe, ordered the new policy on 6 September 1940.

From 7 September 1940, London was systematically bombed by the Luftwaffe for 56 out of the following 57 days and nights.[7] Most notable was a large daylight attack against London on 15 September. Background[edit] [edit] Notes. School Radio - World War 2 Audio Clips. Archive - WWII: Outbreak - Britain Declares War on Germany. Primary History - World War 2 - Growing up in wartime. Primary History - World War 2. World War 2 Chronology - Historic UK. War between the so-called Axis powers of Germany, Italy and Japan on one side and Britain, the Commonwealth, France, the USA, the USSR, and China (the Allied powers) on the other. 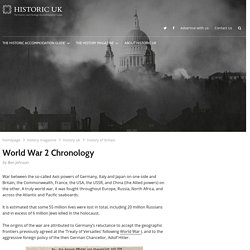 A truly world war, it was fought throughout Europe, Russia, North Africa, and across the Atlantic and Pacific seaboards. It is estimated that some 55 million lives were lost in total, including 20 million Russians and in excess of 6 million Jews killed in the holocaust. The origins of the war are attributed to Germany’s reluctance to accept the geographic frontiers previously agreed at the ‘Treaty of Versailles’ following World War I, and to the aggressive foreign policy of the then German Chancellor, Adolf Hitler. Returning from Munich in 1938 with the above agreement bearing both his and Adolf Hitler’s signatures, Neville Chamberlain believed he had secured peace: ‘I believe it is peace for our time’. Celebrations for VJ Day, 1945.