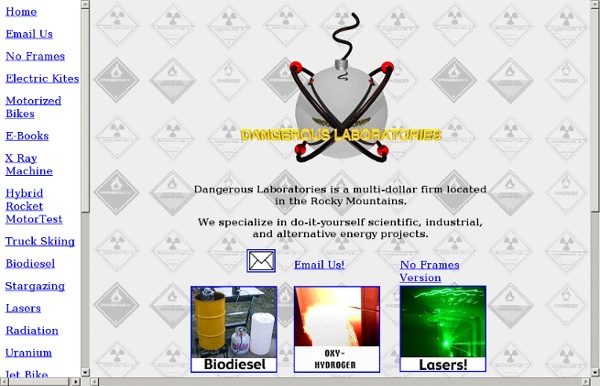 Wireless Power A few years ago MIT created a system for transferring power wirelessly. They transmitted power over a two-meter distance, from the coil on the left to the coil on the right, where it powers a 60W light bulb. Back in 2006, this was a pretty cool thing. You can only imagine what the implications of something like this would be. Whoops - LR4x4 - The Land Rover Forum A bit OT in that it has nowt to do with Land Rovers, but today saw me add some good photos to my collection so I thought I'd post them Crossing a valley close to town this morning to do a 5 minute job, a rather large Hitachi hit a bit of a soft spot Really quite deep

Creative Nerd AWESOME This article features a huge amount of Photoshop web design tutorials, which will teach you simple effects which can be combined together in order to create a great website design. Theses tutorials are perfect for first time Photoshop users because there short and sweet. I hope you enjoy the article and feel free to leave a comment below. OpenCores Details Name: avr_core Created: Nov 5, 2002 Updated: Feb 4, 2014 SVN Updated: Oct 28, 2012 SVN: Browse Latest version: download Statistics: View Other project properties Category: Processor Language: Development status: Stable Additional info: none WishBone Compliant: No License: Description Microcontroller core compatible with one used in AT mega 103 and written in VHDL. The World`s Biggests: Gustav Gun - The Largest Gun Ever Built The largest gun ever built was the "Gustav Gun" built in Essen, Germany in 1941 by the firm of Friedrich Krupp A.G. Upholding a tradition of naming heavy cannon after family members, the Gustav Gun was named after the invalid head of the Krupp family - Gustav Krupp von Bohlen und Halbach. The strategic weapon of its day, the Gustav Gun was built at the direct order of Adolf Hitler for the express purpose of crushing Maginot Line forts protecting the French frontier. To accomplish this, Krupp designed a giant railway gun weighing 1344 tons with a bore diameter of 800 mm (31.5") and served by a 500 man crew commanded by a major-general. Two types of projectiles were fired using a 3000lb. charge of smokeless powder: a 10,584 lb. high explosive (HE) shell and a 16,540 lb. concrete-piercing projectile.

Japanese Scientists Create Touchable Holograms // Current To Our Faithful Current.com Users: Current's run has ended after eight exciting years on air and online. The Current TV staff has appreciated your interest, support, participation and unflagging loyalty over the years. Your contributions helped make Current.com a vibrant place for discussing thousands of interesting stories, and your continued viewership motivated us to keep innovating and find new ways to reflect the voice of the people. We now welcome the on-air and digital presence of Al Jazeera America, a new news network committed to reporting on and investigating real stories affecting the lives of everyday Americans in every corner of the country.

Sourcing electronic components for synth-DIY "Not discontinued, you understand,just on a 52-week lead time." —Dan Mills Hardware Eurorack frames AKA Eurocard frames AKA IEC 60297 sub-racks. supermoduul.com have them cheap. Connectors 7 Tactics for Open Innovation The last decade has seen the rise of collaboration as a by-word for innovation success. This is now often referred to as ‘open innovation’ which we define as sharing the risks and rewards of innovation with others. This may sound simple enough and yet in our experience many large organisations struggle with implementing it as open innovation is it can be highly counter-cultural and disruptive. DorkbotPDX Instead of a weekly order, 2 layer circuit boards are now sent to the fab when the panel fills up. This means panels are going out 2 to 3 times a week instead of just once a week. Contents

VirtuSphere: The Virtual Reality Hamster Ball We’ve always loved the thought of virtual reality, but the real reality of commercially available VR hardware has always been so, well, ridiculous that it’s hard to get too worked up about it most of the time. Most VR systems limit you to a set of massive goggles and some kind of enormous glove that you use to control the virtual world. So as long as you just stand still and wave your arm around, you might find the experience immersive. But overall, VR has been a concept awaiting the right technology. We can’t say whether the VirtuSphere is the technology we’ve all been waiting for — but if you’ve always wanted to run around a digitized universe while encased in a gigantic hamster ball, this might be the technology you’ve been waiting for. The big sphere acts as a trackball, just like the ones some folks use to control their PC’s (except, of course, you stand inside it).

Schematics Guide You can see that there are various bits represented by symbols, all connected in various ways. Let’s look at some of the big picture concepts: Left to Right: The first thing to notice is that you read the schematic left-to-right: the input on the left feeds the signal through parts and pathways in the middle to an output on the right. This left-to-right convention is not universal, but it is probably the most common layout for a schematic. Multimeter Help 2 Mike690003, What is your background? How deep an understanding are you looking for? A practical understanding of DC circuits is not difficult and learning to use the multimeter with DC will make perfect sense. Just through simple experimentation, after reading the accompanying manual, you'll learn a lot. AC circuits are a different creature and you'll need additional stuff and either a formal course or a good tutor to do serious work with AC.

Multimeter Help A multimeter is an electronics testing device that, um, tests multiple things, including resistance, voltage, and current. Using certain multimeter models, you can test to be sure that components — such as diodes, capacitors, and transistors — function properly. You can also troubleshoot your circuit to see where current is failing and pinpoint the problem spots. You don't have to break into your piggy bank to buy a multimeter.