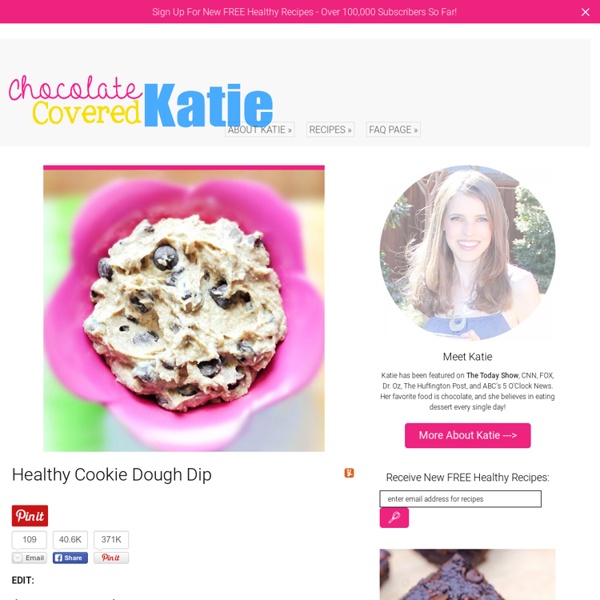 If you received an email from Pinterest saying I didn’t want you to pin my recipes, this is NOT true! I am so sorry for this and have no idea why they would send such messages out! Please accept my apologies… I’m so honored when people pin things from my site or follow my Chocolate Covered Katie Pinterest Board. Healthy Cookie Dough Dip… it’s like an unbaked form of those popular White Bean Chickpea Blondies. I don’t know about you, but when I make the blondies, quite a bit of the raw dough gets consumed in the process! So I figured, why bother baking them at all? But will “normal” people like it? Often, I’m unsure if a recipe with which I am in love will be a hit with the general population of people who aren’t used to healthy food. The following is directly from my About Chocolate Covered Katie page. I refuse to believe one must give up delicious food in order to be healthy… Healthy food can taste incredible when it’s prepared the right way. Something amazing happened… Ingredients

Chocolate Hazelnut Morning Coffee [oops, sorry. I mean] Smoothie I don’t know about you, but I can’t start the day without a good cup of coffee. Not that I am a BIG coffee drinker, but I do need at least one cup as soon as I get out of bed, followed by another one a little later in the morning. In fact, on week days, I drink my first cup of coffee while working out, and I often wonder if there are others like me out there. I mean, coffee isn’t necessarily the first thing that comes to mind when one thinks of a refreshing drink to have during and intense work out… I know, I’m weird sometimes… OK, make that often!

Dijon Chicken Club Sandwiches By the time I get home from work, I often don't feel like cooking a big meal. But if I've done some of the prep work in advance, it becomes really easy. This is pretty much my weekday plan. If I didn't do this, we would end up eating out a lot more often, or making frozen pizzas. When ever I grill chicken, I make a couple extra pieces so that I have leftovers for salads or sandwiches during the week.

Dessert Recipe: No-Bake Boston Cream Pie Strata Cookbook Recipe But even with making your own homemade pudding from scratch, this recipe doesn't take more than an hour to put together, and then it is all done. Since it needs to be refrigerated before serving, it's the perfect thing to make ahead of time for a dinner party. I love making this the night before a big party, or even the morning of. People always go wild for it.

Cookie Dough Brownies Cookie Dough Brownies Sorry about the pictures– I didn’t enough lighting to take a decent picture and it was the best I could do before I had to rush off to work. I can’t stand the shadow in the second picture and tried to brighten them up the best I could without photoshop www.aldentepasta.com/product-categories/fettuccines/ Perfect for any occasion, any recipe, whether it is chicken soup, fettuccine alfredo or simply pasta with fresh tomatoes, olive oil and Parmesan cheese. Parents from all over the country write to us saying that even their kids can tell the difference between Al Dente Egg Fettuccine and others. That makes us feel so good!

Beer Battered Onion Rings One day, months ago, after Ben and I were watching a show on the Food Network about fried foods, Ben had asked me to recreate the beer battered onion rings that were featured. Knowing I’m not one to frequently bust out a vat of oil to “waste” on frying, I quickly filed his request in the very back of my mind. No, seriously, the very back shelf of my brain that is probably full of dust and other undesirable recipe requests. Onion rings have never been one of my favorite foods. Cinnamon Swirl Bread I made this bread late at night and poured a glaze on top to intensify it even more. I knew there was a problem before cutting into it because it was sunken in the middle. I found out that the innards of the bread were not fully cooked. I went back to the website to see what others had said about the cake, and they mentioned that the gooey center was the best part, but my cake was a bit too gooey.

Creamsicle Pudding Recipe Candied Orange Peel This recipe takes about three hours to prepare, so plan accordingly. Ingredients 2 Navel Oranges or other thick skinned citrus (grapefruit, lemons, limes) 1 cup Sugar Fresh Food Friday: 100 Healthy Snack Ideas Join our page on Facebook for our latest recipes and projects! Happy Friday! I did pretty well this week . . . I have only caved on one day to a sugary treat (I will be posting the treats later- they were so good! Totally worth losing points over.)! Roasted Baby Potatoes Wow...these look like little pillows of perfection! I am such a potato junkie! Love this recipe! : ) Oh, yum! My family would be all over these delicious little spuds!