Chena Sondesh/Curdle Milk Fudge. When I offered these to Arvind, he said ‘did you get these from the sweet shop’? I was on cloud 9 and kept blabbering about it to everybody for the next two days Sondesh or Sandesh, as you may call it, is sweet fudge made with milk and it is very popular among Bengalis. It’s usually made during special occasions and at times, just because we want to eat it. You don’t have to struggle much to look for Sondesh in West Bengal.

How to Make Marshmallow Fondant - Clockwork Lemon - StumbleUpon. This time I decided to make it with those mini fruit flavored marshmallows. 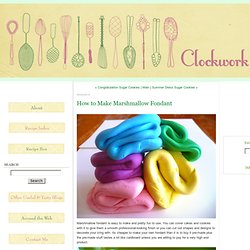 I had to sort them by colour first. I figured they would add a little bit of flavor to the fondant so I wouldn't have to add much flavoring oil. I use gel colours to dye my fondant but regular food colouring will work too. You won't be able to get really dark colours without making your fondant sticky, but for lighter colours you can just even it out with more icing sugar. I also had lemon oil and coconut flavoring on hand.. oh la la the value brand (which still works fine). Step One: Take a couple of handfuls of marshmallows and put them in a microwave safe bowl. I like to make smaller batches because its easier to add the colour to the melted marshmallow than it is to work the colour into the fondant later.

Step Two: Stick the marshmallows in the microwave for ten seconds at a time until the are puffed up and easily stir into a goo with a wooden spoon. Step Three: Step Four: Fondant with the icing sugar kneaded in. Chocolate Brownie Pudding. Chocolate lovers – this one is for you! 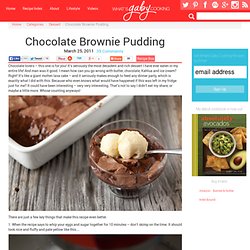 It’s seriously the most decadent and rich dessert I have ever eaten in my entire life! And man was it good. I mean how can you go wrong with butter, chocolate, Kahlua and ice cream? Right! It’s like a giant molten lava cake – and it seriously makes enough to feed any dinner party, which is exactly what I did with this. There are just a few key things that make this recipe even better. The Infamous Jacques Torres Chocolate Chip Cookies - StumbleUpon. Now, I have a chocolate chip cookie recipe that I swear by. 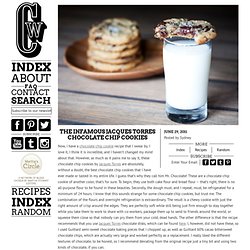 Either way, I made these and everyone that tried them went nuts. Edit: For more Jacques Torres deliciousness, check out my Jacques Torres Chocolate Mudslide Cookies! Your ingredients. Whisk together the cake flour, bread flour, baking soda, baking powder, and salt. Beat together the butter and sugars, until light and fluffy, at least 3 minutes. Beat in the eggs, one at a time, followed by the vanilla. Add in the flour mixture, very gradually, until just moistened.

Fold in your chocolate. Author: The Crepes of Wrath Prep time: The Pastry Affair - Home - Butterbeer - StumbleUpon. This is part III in a mini-series of Harry Potter snacks from the books brought to life (part I is on Honeydukes treats, part II is all about the cauldron cakes, and part IV showcases decadent butterbeer cupcakes). 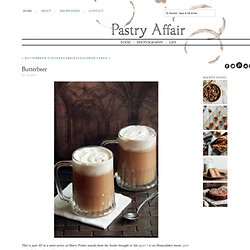 Last August, my family made the two thousand mile journey to the Wizarding World of Harry Potter at Universal Studios. Orlando has always been one of my family's favorite vacation destinations. Add in my love (and obsession) with Harry Potter and we all knew that once the park officially opened I couldn't be kept away for long. On the big day, we woke up at an obscene hour to a bright dawn. While the rest of my family was dragging their feet and speaking in yawns, I was too excited to dwell on my lack of sleep and tired eyes. This was my moment. When I entered the park, I was immediately swept away by the architecture and the detail. The Brownie That Will Change Your Life - StumbleUpon. Let me start off by saying that viewer discretion is advised for today’s post. 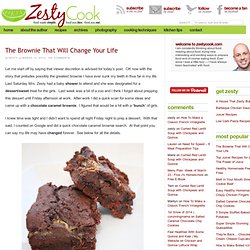 OK now with the story that preludes possibly the greatest brownie I have ever sunk my teeth in thus far in my life. Last Saturday Mrs. Zesty had a baby shower to attend and she was designated for a dessert/sweet treat for the girls. Recipe} The Most AMAZING Chocolate Cake&8230; EVER - StumbleUpon. Cinnamon Sugar Pull-Apart Bread — Joy the Baker - StumbleUpon. I’m sorry. 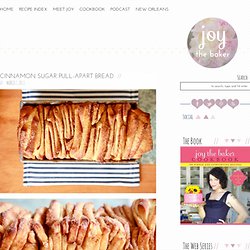 I know it’s Monday morning and you probably came here for some pretty pictures of food that you could glance at, and then move on with your day… and here I go thrusting warm, soft cinnamon sugar bread in your face. It’s not fair. I know it’s not fair. I know that now you’re craving cinnamon rolls, and cream cheese frosting and chili fries and hot dogs.