Energy Bars/Bites. Popcorn. Pickled. Cheeses. Yogurts. Side Dishes. How To Make Pemmican: A Survival Superfood That Can Last 50 Years. Image source: indiegogo.com Packed with calories and nutrition and able to be packed and stored for long periods, pemmican is often called the ultimate survival food. 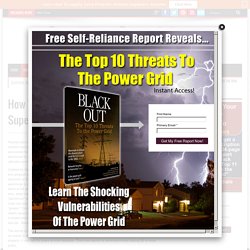 Created by Native Americans and adopted by European explorers of the New World, pemmican is a concentrated blend of fat and protein from lean, dried meat. The word “pemmican” is derived from the Cree root word “pimi” for “fat” or “grease.” Traditionally, the meats used in pemmican included bison, moose, deer and elk. Beef can be used as well. The secret to pemmican’s long shelf life is in properly rendering the fat from the meat. Oven-Roasted Tomatoes. Tonight, I had a bunch of wrinkly San Marzano tomatoes on my kitchen counter, so I decided to roast them up. 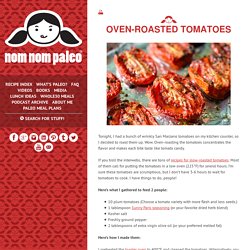 Wow. Oven-roasting the tomatoes concentrates the flavor and makes each bite taste like tomato candy. If you troll the interwebs, there are tons of recipes for slow-roasted tomatoes. Most of them call for putting the tomatoes in a low oven (225°F) for several hours. I’m sure these tomatoes are scrumptious, but I don’t have 3-6 hours to wait for tomatoes to cook. Parmesan Crisps. Sweet and Spicy Mixed Nuts.

Did you know that Bulk Apothecary carries a HUGE selection of natural foods? 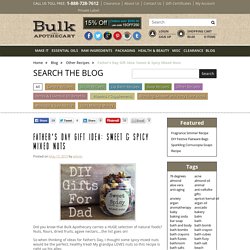 Nuts, flours, dried fruits, agave nectars….the list goes on! So when thinking of ideas for Father’s Day, I thought some spicy mixed nuts would be the perfect, healthy treat! My grandpa LOVES nuts so this recipe is right up his alley. You can make this recipe as is, or double/triple the batch to package some up for all of the special guys in your life! Sun-Dried Everything. I’ve beens slightly obsessed with sun-drying things. 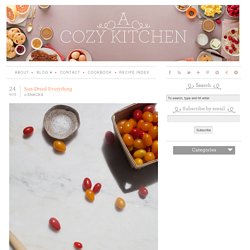 I usually make kale chips in my oven about once a week because it’s super simple and I love crunchy things. But right now, since it’s summer and hot AF, I’m trying to avoid turning on my oven. Of course there are exceptions: Hatch Chile Cornbread (coming soon), pie (always) and other delicious things. But these foods HAVE to be made in an oven, veggie chips and other things can be made in the hot summer sun. Roasted Masala Chickpeas. How to make Pemmican – The Ultimate Survival Super-Food. 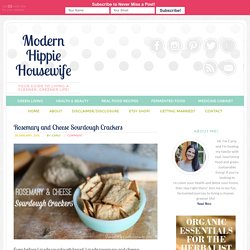 They were an instant hit with my family, and I have proud memories of making them for the first time, knowing that they were replacing our regular store bought brands. I made these crackers in what I like to call “phase 2″ of my cleaner, greener living journey – the pillaging the pantry of all processed and preservative-filled foods phase (“phase 1″ was ridding the house of toxic chemicals and cleaners.)

If you love the subtle, sour taste of sourdough bread, then you’re going to love these crackers too. Adding rosemary, sharp cheddar and homemade garlic and onion powder to the mix certainly doesn’t hurt the flavor either. These crackers are also uniquely different because the dough has been soured, or rather, fermented. So, before you can make these delicious rosemary and cheddar sourdough crackers, you’re going to need to make a sourdough starter. 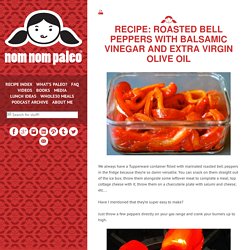 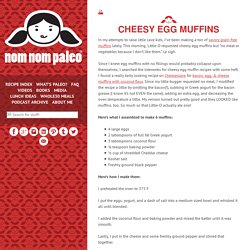 This morning, Little-O requested cheesy egg muffins but “no meat or vegetables because I don’t like them.” Le sigh. Since I knew egg muffins with no fillings would probably collapse upon themselves, I searched the interwebs for cheesy egg muffin recipes with some heft. I found a really tasty looking recipe on Cheeseslave for bacon, egg, & cheese muffins with coconut flour. Bacon & Guacamole Sammies Don’t these bacon and... Bacon & Guacamole Sammies Don’t these bacon and guacamole sammies look good? 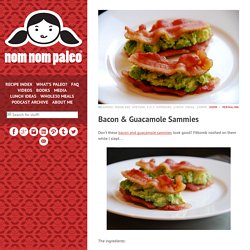 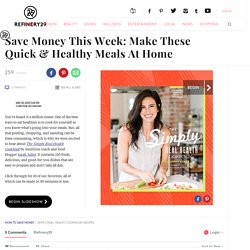 ScrawnyWOD: Baked Beef Jerky. I don't own a food dehydrator but I've been dying to make my own jerky for some time now. 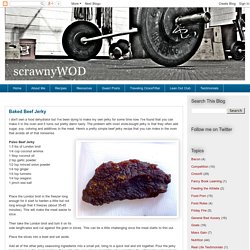 I've found that you can make it in the oven and it turns out pretty damn tasty. The problem with most store-bought jerky is that they often add sugar, soy, coloring and additives to the meat. Here's a pretty simple beef jerky recipe that you can make in the oven that avoids all of that nonsense. Paleo Beef Jerky 1.5 lbs of London broil 1/4 cup coconut aminos 1 tbsp coconut oil 2 tsp garlic powder 1/2 tsp minced onion powder 1/4 tsp ginger 1/4 tsp turmeric 1/4 tsp oregano 1 pinch sea salt. Indian Food Rocks: Sunday Snack: Chana Jor Garam. I have had Chana Jor Garam on my mind after my last Faces of India post. I couldn't shake off the need to indulge in some, especially after baking moist fudge walnut brownies for the Boulder Balvihar's end-of-year awards ceremony and picnic.

Balvihar picnic by the Boulder Creek, Eben G. Fine Park We had great weather after a week of incessant rain and gloomy skies, a departure from our 300+ days of sunny blue skies. Seattle bore the brunt of our collective wrath. Strawberry Jicama Lettuce Wraps. I swear, the weather here in Southern California will not make up its mind lately! Chive Blossom Vinegar - Minimally Invasive. Eight years ago, Gil and I were newlyweds enjoying our first summer together in this house. We started decorating and renovating — projects that continue to this day — and I tried my hand at gardening, not realizing in that rush of excitement over having a yard that we barely get enough sunlight for grass, let alone tomatoes. But I have managed to grow many pots of herbs on our second-floor bedroom deck over the years.

They require almost no maintenance beyond a good dousing during dry spells, but the lowest maintenance herb of them all (and thus, the closest to my heart) is my chive plant, which still returns every Spring and still delights me when it does. That first summer, I learned that chive blossoms are edible, and sprinkled them liberally over green salads, potato salads and omelettes for a hint of onion flavor and a dash of color, but never thought to do anything more than garnish with them until just last month. On the first zucchini of the season (thanks, Bialas Farms!) Cucumber roll-ups with Greek yogurt ~ Eatviews. Cucumber Roll Ups with Greek Yogurt, made with cucumbers sliced lengthwise, topped with a mixture of Greek yogurt, lime juice, herbs & spices. Include turkey if you'd like. Ingredients:cucumbers1-1/2 cups low-fat Greek yogurt1 tablespoon curry powder1 tablespoon lime juicesalt and pepper1 tablespoons herbs, such as cilantro, if desiredham or turkey if desiredInstructions See full instructions on : freshdreamer.com.

31 Healthy Snacks for Fruit Lovers. We all know fruit’s one of those healthy food groups. But that doesn’t mean we can only eat it au natural! Here are 31 fruit-filled snacks to make your daily dose of fruit a bit more interesting. Sweet 1. Rosemary Roasted Almonds. Video: Healthy Snacks! Maca Balls. Veggie Jim Recipe - Lexie's Kitchen. Hi! This is Jill, Lexie's sister from Hawaii. I've been visiting Lexie for the last week, helping out with the boys, and of course testing and eating some fabulous food. One of our experiments this week was a dehydrated snack we're calling Veggie Jims.

10 Healthy Snacks for Clean Eating. Clean eating doesn’t have to be boring. There are plenty of foods you actually want to eat that will help you stay on track throughout the day. 4-Ingredient Healthy Vegan Bacon. This is about to blow your mind.It always seems that, when asked what food they miss the most, a good portion of vegans and vegetarians – both new and old – reply with bacon. How-to Make Homemade Nut Butters. Monday Munchies. Daily Life Hacks Here - Life Hackable. DIY Flavored Extracts.

Fruit/Veggie Leathers. Apple Sauce. Sauerkraut. Roasted Rosemary Almonds. Tired of shelling out big bucks for the roasted rosemary almonds from Oren’s Kitchen, my hubby decided to roast some himself. He’s very resourceful, that one. Crackers. Chips.