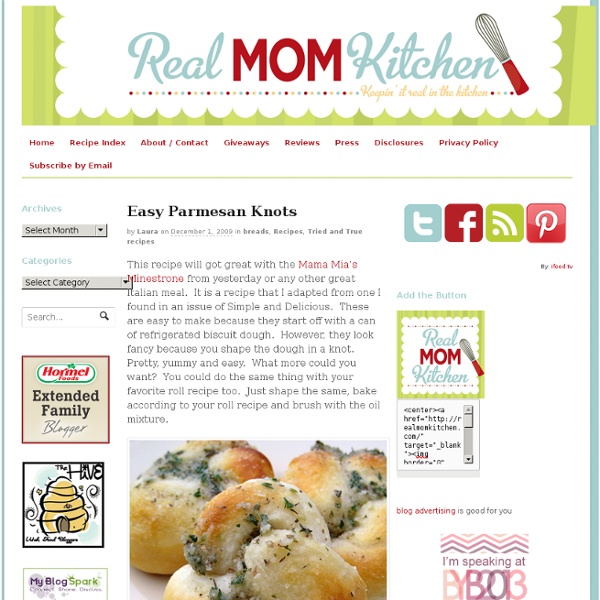 This recipe will got great with the Mama Mia’s Minestrone from yesterday or any other great Italian meal. It is a recipe that I adapted from one I found in an issue of Simple and Delicious. These are easy to make because they start off with a can of refrigerated biscuit dough. However, they look fancy because you shape the dough in a knot. Pretty, yummy and easy. What more could you want? Easy Parmesan Knots 1 tube (12 ounces) refrigerated buttermilk biscuits ( I used Pillsbury Golden Layers Refrigerated Buttermilk Biscuits)¼ cup canola oil3 tablespoons grated Parmesan cheese (I did use the green can stuff)½ teaspoon garlic powder1 teaspoon dried oregano1 teaspoon dried parsley flakes Roll each biscuit into a 12-in. rope and tie into a knot; tuck ends under.

Apartment Therapy The Kitchn Cake balls, cake pops, cakesicles — have you tried them? They swept the internet like a tidal wave over the last few years, thanks in part to the delightful and amazing creations of Bakerella and other creative cooks. We finally decided to try them, and while ours don't achieve the heights of more talented confectionery artists, they tasted pretty darn good! 24 exotic ways to eat a hot dog Today we are celebrating our freedom, and as we know, with freedom comes options, with options comes choices, and with choices comes serious indigestion. Keeping that in mind, here are 24 ways to eat America’s favorite 4th of July snack—one for each hour of the day. 1. On a pizza

Pizza with Hoisin Sauce We eat pizza often so sometimes it’s nice to make one that’s different from a traditional, Italian-style pizza. And this ain’t no traditional pizza. Now…of course a traditional red sauce, mozzarella cheese pizza can not be beat in my book. Cincinnati "Skyline" Chili Recipe - How to Make Cincinnati "Skyline" Chili Recipe The inventor's Greek roots can clearly be seen in the unique blend of spices. The secrets to this recipe are the long slow cooking, as well as the overnight refrigeration, which allow for all the excess fat to be removed. I've also included the five "ways" for ordering this wonderfully different chili, which is usually served over spaghetti. Serves 6 ...stumbled upon yesterday was a list of interesting drinks. I told you guys that I'm wasting a lot of time nowadays looking at pretty pictures and interesting ideas on Pinterest.I already have a bunch of different boards for all kinds of stuff - be it food or interior design. But I especially liked the idea of someone making up Harry Potter related drinks. And then I googled the term and came up with a bunch of interesting stuff. So I'm going to share only a couple of them with you guys (I know that this won't be the favorite topic of a bunch of you, but check them all out. Maybe you'll find something you like.), because there are a LOT of them out there. These next ones are my favorites out of all the ones I saw till now.

Garlic Butter Rolls › shutterbean For those of you who swoon over garlic twisty bread but can’t bring yourself to order whole pizza to make the delivery worthwhile, this one’s for you! They are scrumptious! Dip some in marinara or serve them with a salad and pasta! You could also eat them alone, directly from your kitchen counter. No one will know. Promise. A Romantic Meal Idea: Our Perfect Romantic Menu Food's not enough, you think. You want more than just a romantic meal idea this anniversary or Valentines day! So you wrack your brain trying to come up with an answer, trying to find the perfect gift. Would he like a remote control truck with its bed full of rose petals? Nah, too silly... and too sappy. Maybe you should get him a Shetland pony and name it "Happy Pony of Endless Love"?

Grilled Pesto and Mozzarella Sandwich for a Garage Painter The other day my son was painting the garage. It was hot, muggy and he was starving. I thought I had nothing in the house. Then I remembered my homemade pesto, oven roasted tomatoes and some leftover fresh mozzarella cheese.I had some yummy Arthur Avenue Casa Bread from the Bronx and I gave it a quick toasting. Slathered it with pesto, slices of mozz and threw on some oven roasted tomatoes.