Cliteracy 101: Artist Sophia Wallace Wants You To Know The Truth About The Clitoris 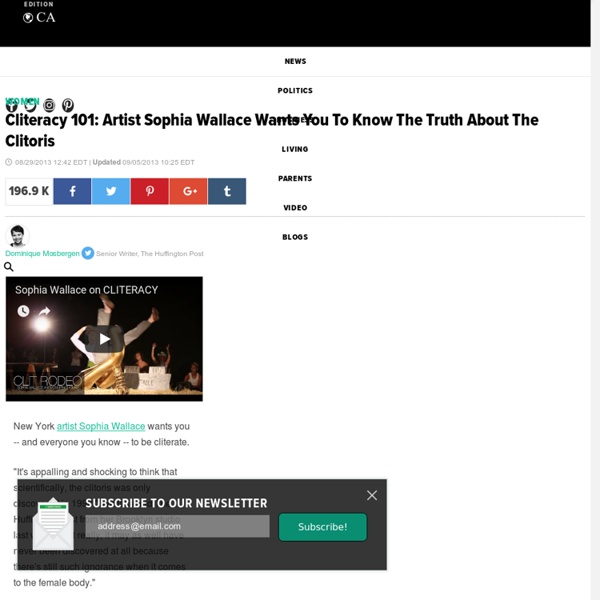 New York artist Sophia Wallace wants you -- and everyone you know -- to be cliterate. "It's appalling and shocking to think that scientifically, the clitoris was only discovered in 1998," Wallace told The Huffington Post from her Brooklyn studio last week. "But really, it may as well have never been discovered at all because there's still such ignorance when it comes to the female body." The clitoris, described as the only human body part that exists solely for pleasure, is not merely a little "button" hidden between a woman's legs, but rather a large, mostly internal organ many people don't know about, Wallace explains. According to a 2011 post by Museum of Sex blogger Ms. In 1998, Australian urologist Helen O’Connell published a paper in the Journal of Urology describing the sheer scope and size of the clitoris. Wallace, citing anecdotal evidence, says ignorance still seems to be ever-pervasive in modern society. Scroll down to learn more about Wallace's project: What is "Cliteracy"?

HuffPost Love And Sex Podcast: The Power Of The Clitoris Whether it's Freud telling the world that "real" women orgasm through vaginal penetration or a trashy magazine suggesting sex positions that even the most skilled Cirque Du Soleil performers wouldn't be able to master, bad sex advice isn't hard to come by. Instead it's the frank, real, anatomically correct conversations about sex and pleasure that have trouble seeing the light of day. And when it comes to any conversation about women's sexuality, the clitoris -- the only organ on the human body whose sole purpose is pleasure -- is often the elephant in the room.

Can Menstrual Products Mess With Your Birth Control? Reprinted with permission from Bedsider Ever since I got my IUD last year, I’ve been pretty much in love, especially when my period comes around. Yes, I just said that. Getting to use my DivaCup with my ParaGard IUD is possibly the best thing ever. So you can only imagine that my world stopped a bit when a few friends told me that there were risks in using my cup with my IUD. And then I heard some other people repeat the rumor. 3 Ways to Make Your Vagina Smell Good Edit Article Understand the CausesQuick SolutionsPractice Good Hygiene Edited by Jack Herrick, Carolyn Barratt, Oliver, SilverSparkz and 40 others How Common is Your Sexual Fantasy? "Masters of Sex" on ShowtimeWe had no idea. We all have at least one, and most of us have many: Sexual fantasies. In fact, it's normal, and even healthy, to have sexual fantasies.

Hindu Rituals for Death and Grief - Beliefnet Hinduism, like other great religions, has specific rituals for honoring the deceased and addressing a family's grief. Dr. Vasudha Narayanan, Professor of Religion at the University of Florida and head of the American Academy of Religion, described Hindu ceremonies in a conversation with Beliefnet: In most cases, the procedures are conducted almost immediately, within a 24-hour period. When a parent has died and the children live far away, other family members hold the body until the children arrive to do the last rites.According to Hindu tradition and its sacred texts, only a male family member (such as a husband, father or son) can perform the last rites. However, in some cases women have taken on this role.

Gloria Steinem Wears A Clit Ring Like A Boss Feminist icon and all-around legend Gloria Steinem continues to be a trailblazer, and this time she's proudly wearing a clitoris ring. Caledonia Curry, an artist also known as "Swoon" who founded the Heliotrope Foundation community for artists, shared a photo on her Instagram account of Steinem wearing the "Clitoring" made by Penelopijones jewelry. The ring is an anatomically correct rendering of the clitoris, which is actually much larger in size than most people realize. (It measures between 3 1/2 and 5 inches long and 2 1/2 inches wide on average.) "@penelopijones have made a ring which anatomically maps the beauty in it's entirety - and when I found myself at a table with Gloria Steinem I took mine right off my finger and [gave] it to her," Swoon wrote. "Thanks lady hero!"

Reusable Cloth FAQ - Pad Frequently Asked Questions - Homestead Emporium What are the measurements for H.E.R. pads? Winged Pad Measurements H.E.R.Pads wrap around wings offer extra protection against leaks. Testes size correlates with men's paternal instinct Men with smaller testes than others are more likely to be involved in hands-on care of their toddlers, a new study conducted by anthropologists at Emory University finds. The Proceedings of the National Academy of Sciences (PNAS) published the results of the study Sept. 9. Smaller testicular volumes also correlate with more nurturing-related brain activity in fathers as they are looking at photos of their own children, the study shows. "Our data suggest that the biology of human males reflects a trade-off between investments in mating versus parenting effort," says Emory anthropologist James Rilling, whose lab conducted the research. The goal of the research is to determine why some fathers invest more energy in parenting than others. "It's an important question," Rilling says, "because previous studies have shown that children with more involved fathers have better social, psychological and educational outcomes."

“Humans, not just students” – In-service training boosts Danish educators’ skills - Elm - European lifelong learning magazine Professional qualifications for adult educators have been subject for discussion and a research question for more than thirty years. The content and the form of adult educator training programs have been debated vigorously. In this article we illustrate the advantages of competence development as in-service training. Thus, our focus is to describe how competence development of adult educators can be accomplished as an integrated part of the daily practice in (adult education) schools. In the Danish example presented, we show how in-service training can be carried out with great impact on the teachers’ self-understanding, the educational culture of the school and even on dropout rates.

Death and Dying - Magazine Web Edition > January/February/March 2007 The Hindu view of the grand departure and it's sacred rites of passage "Lead me from darkness to light, from death to immortality." This famed Vedic prayer proclaims the human urge to survive, to conquer death and to know the joys of illuminated consciousness. People often pilgrimage to an isolated place in expectation of a vision, be it a jungle of fauna and foliage or cement and glass.

Cliteracy: 21 Things Millennials Should Know About the Clitoris Today, nothing should be revolutionary or subversive about ladies' lady parts. But ask most women, let alone men, about that cute little button scientists call the clitoris, and you're likely to hear ridiculous references to things like "flicking the bean" or inaccurate male-centric comparisons to penises (only "smaller"). In reality, that so-called little bean is just the tip of the iceberg. Increasing knowledge about the clitoris isn't just some nerdy feminist endeavor; it's a crucial cog in the pursuit for women's equality.