We're on a mission to spread important ideas and change minds. 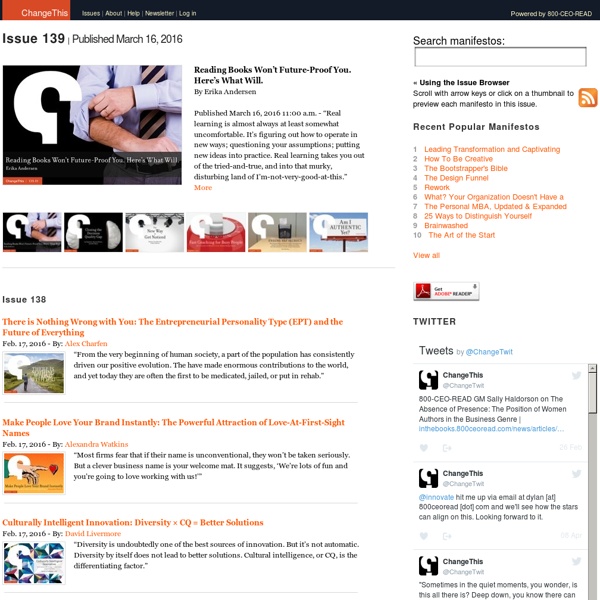 Issue 116 | Published April 16, 2014 How Your Biases Make You Blind By Faisal Hoque & Drake Baer Published April 16, 2014 12:00 p.m. - “If a company is homogenous in form, it leads to a lack of understanding of what value the customer wants. That misunderstanding is the seed of disruption, for the gap between the value you think your customers want and the value your customers actually want is precisely the space where a competitor can replace you.” More Heed Your Call By David M.

10 Ways You're Being Fleeced by Banks Activist Post Taxpayers are rightfully angrier than ever before about the state of the U.S. economy and the government's handling of the financial crisis; perhaps even more so than the Colonists at the original Tea Party. After all, it appears that the only group benefiting during this painful slide into recession are the very people who caused the crisis -- The Banks. On the verge of bankruptcy in 2008, the banks are now once again making record profits and paying record bonuses, while nearly every other industry struggles to keep their head above water. The banks seem to have designed the system where all businesses and individuals are dependent on them for credit, and without new lending industry grinds to a halt. Given that banks can make risk-free profits by front running the stock market and selling $600 trillion of worthless derivatives for monster gains, there seems to be little motivation for them to lend money at today's record-low interest rates.

How To Treat Others: 5 Lessons From an Unknown Author Five Lessons About How To Treat People -- Author Unknown 1. First Important Lesson - "Know The Cleaning Lady" During my second month of college, our professor gave us a pop quiz. I was a conscientious student and had breezed through the questions, until I read the last one: "What is the first name of the woman who cleans the school?" Resilience Metrics ENISA is working on the measurement frameworks and metrics for resilient networks and services. This belongs is under the broader umbrella of the of network resilience. In this area of activities ENISA launched in 2010 a study on Measurement Frameworks and Metrics for Resilient Networks and Services. The methodology included both a survey, a desktop research and further consultation through a Workshop. The overall work is also summarised in this video. The outcome of the study includes two reports.

where creativity and technology meet A. & H. Beehre, Alnico (2006), Vavasour Godkin Gallery, Auckland. Copyright & courtesy of the artists. Nathan Thompson Busytown (2004), sound, single channel projection, 15min loop The Physics Room, Christchurch. 5 Reasons NOT to Pay Your Credit Cards Are you one of the millions of Americans trying to decide between paying your credit card bills and eating? John Galt -- Activist Post We live in a matrix that goes to unspeakable expense to nurture us from the teat to be good consumers. You are issued a tax collection number at birth (SS#), another artificial number for your credit worthiness (FICO), and then you're extended a certain amount of tokens to play "life" based on those numbers.

30 Habits that Will Change your Life - StumbleUpon Developing good habits is the basic of personal development and growth. Everything we do is the result of a habit that was previously taught to us. Unfortunately, not all the habits that we have are good, that’s why we are constantly trying to improve. The following is a list of 30 practical habits that can make a huge difference in your life.

Language Turned Convict Heere I set before thee (good Reader) the lewd lowsie language of these loytering lusks, and laysie lorels, wherewith they buy and sell the common people as they passe through the countrey. – Thomas Harman, 1573 Around the year 1566, a Kentish gentleman named Thomas Harman became a literary sensation.

Benson Latin American Collection Ernesto Cardenal Papers: Selected Materials on Display Wednesday, December 7, 2016 to Monday, May 15, 2017 Ernesto Cardenal conducting mass in Solentiname, Nicaragua, 1974 The opening of the Ernesto Cardenal Papers at the Benson Latin American Collection was celebrated on November 15, 2016, with a poetry reading by the Nicaraguan luminary himself, preceded by a panel discussion among scholars of literature, religion, and political science. 10 Awesome Websites to Make You Think Intelligence is something that must compensate the lack of reflexes and a poor adaptation to the live world. We’re talking here about the humankind. If you look back in history, we’ve had many geniuses. We still have geniuses today. They are big thinkers and they can move the world with a single finger. They fascinate us, and we fascinate others, because we are not equal.

Ramin Shokrizade's Blog - The Top F2P Monetization Tricks The following blog post, unless otherwise noted, was written by a member of Gamasutra’s community. The thoughts and opinions expressed are those of the writer and not Gamasutra or its parent company. [UPDATE: Alex Dale, the CMO of King.com, has graciously taken his time to clarify a few points related to CCS, and I have edited this paper in a few places using italics to show the updates] Coercive Monetization A coercive monetization model depends on the ability to “trick” a person into making a purchase with incomplete information, or by hiding that information such that while it is technically available, the brain of the consumer does not access that information.

How To Be Creative <A HREF=" Widgets</A> Issue 6 | How To Be Creative By Hugh MacLeodPublished Oct. 19, 2004 6:00 p.m. MacLeod, an advertising executive and popular blogger with a flair for the creative, gives his 26 tried-and-true tips for being truly creative. Each point illustrated by a cartoon drawn by the author himself.