How And Why To Keep A “Commonplace Book” 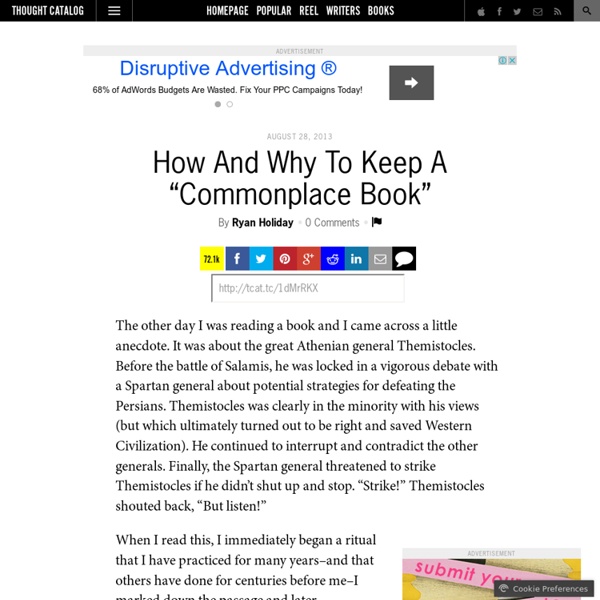 The other day I was reading a book and I came across a little anecdote. It was about the great Athenian general Themistocles. Before the battle of Salamis, he was locked in a vigorous debate with a Spartan general about potential strategies for defeating the Persians. Themistocles was clearly in the minority with his views (but which ultimately turned out to be right and saved Western Civilization). He continued to interrupt and contradict the other generals. Finally, the Spartan general threatened to strike Themistocles if he didn’t shut up and stop. When I read this, I immediately began a ritual that I have practiced for many years–and that others have done for centuries before me–I marked down the passage and later transferred it to my “commonplace book.” In other posts, we’ve talked about how to read more, which books to read, how to read books above your level and how to write. What is a Commonplace book? Some of the greatest men and women in history have kept these books.

Crispy Baked Beet Chips Recipe The other day, I got a new vegetable slicer and I have been slicing up any vegetable I have in the fridge ever since. I had a bunch of beets in the crisper and remembered tasting beet chips a long time ago. Thin, crispy, sweet and salty, beet chips are a great healthy snack. To make sure that you do not have purple stained hands when working with beets, peel them under cold water. I sliced them 1/16 inch thick which, after baking, created the perfect crispy beet chip. They were baked low and slow so that they dry out. Baked Beet Chips Total time 4-6 beets, small or medium sizecooking spray (ie: Pam)salt Preheat oven to 300FPeel the beets under cold water.Slice the beets into 1/16 inch slices using a food slicer or mandoline.Place parchment paper on a baking sheet.

Google Ranking Factors: A Discreetly Cleaner, More Social Web & An Ever Dominating Search Engine Recently, Search Metrics released a white paper on their findings for Google’s SEO Ranking Factors in 2013. It displays the correlation between particular metrics such as ‘Facebook Likes’ and ‘Backlinks’ and the rank ability of a page within Google. Also available in the 70 page document are comparisons with 2012’s data, where that data is available. Not to many marketers surprise, a lot has changed. According to Search Metrics, it’s time to get social! *The data from search metrics is based on research and is not 100% factual. On-Site: Coding & Meta Data Length of URL In this graph you can see that the Length of URL is the highest on-page ranking factor. One might just say that this is proof of Google’s underlying attempt to educate and clean up the web. With great power, comes great responsibility – something Google have in abundance. Touché Google, touché. Existence of Description I found this one particularly interesting. I’ll let you make your own decisions on the others.

Run-n-Read As Featured In Reading from an electronic display is difficult for people while performing cardiovascular activities or while riding in a moving vehicle. Run-n-Read, a cool clip-on device, makes reading possible in such dynamic scenarios. Run-n-Read can be used with most cardiovascular workout machines, such as treadmills, elliptical trainers, stepmills, stairmasters, and stationary bikes. It can also help reduce eye strain while riding in a train, bus, or car. You can clip it to your headband or to your shirt. The device tracks your head movements and then moves the text on the screen in real time to always be in sync with your eyes. It's packed with sophisticated electronics - an accelerometer, a low-power micro-controller, and a low energy Bluetooth module - to provide the best experience. Run-n-Read comes with a free mobile application and is compatible with all new generation iOS and Android devices. Run-n-Read also comes with its own gesture recognition system!

16 Reasons Why Gin Is The Best Joyously Domestic: Crispy Potato Roast I about died when I saw a version of this recipe on Martha Stewart's website. I am a huge potato fanatic and these just looked stunning! I altered a couple of things in her recipe, but followed her technique and concept. I used some pancetta in my version. Bacon may work fine, too. The key to this recipe is getting the potato slices as thin as you can, so prepping the potatoes takes a little time. This is a dish that is super impressive-looking and would really wow at a dinner party! For nutritional value information, you can visit my post of this recipe on My Recipe Magic. Ingredients: 3 tablespoons butter, melted 3 tablespoons extra-virgin olive oil 10 - 12 russet potatoes, peeled Kosher salt 1 small onion or 4 shallots, peeled and sliced very thin 1/2 teaspoon red pepper flakes (optional) 4 - 6 fresh thyme sprigs About 3 ounces pancetta, cubed Directions: Preheat oven to 375 degrees. Combine the oil and melted butter in a small dish. Slice the potatoes as thin as possible crosswise.

Salt Market Syracuse Fan Campaigns That Actually Saved TV Shows Joss Whedon wrote us Browncoats an email saying we had better pony up and damned well see the movie over three times over opening weekend. Then wrote us another letter on monday saying we had personally failed him and let Jessica Alba's tits win. Yeah, I'm pretty sure Whedon himself gives credit to an exec at Universal, who was just a fan of the show, before the fan campaign. I got that off of Whedonesque, too. As well he should, because I understand that's basically how it went down. However, it's a much better story to rally the troops if you make a special saying it's all about them. FIrefly made me tired. I will support buy buying DVDs and tchotckes and watching repeatedly on DVR and Hulu and those sorts of things. Mummy's got nothing left.

Sidecastr launches, joins competition for the second screen Boston-based startup Sidecastr has recently emerged out of stealth mode, the latest second screen app to hit the social TV world. Available now for iPad, the app has a mission “no less than becoming the ‘social network for social TV,’” according to Steven Brand, the Harvard-educated founder and CEO. In the face of stiff competition, here’s a look at what Sidecastr says makes the app unique. It’s a competitive space, but nobody’s cracked the code The Guardian, which has championed Zeebox, is already describing Sidecastr as a potential rival to the UK-based social TV app. How is Sidecastr different than other second screen apps? Here are a few different attributes that Brand described differentiate Sidecastr. -”We obliterate the requirement of having to watch live TV in order to experience and participate in the real-time social TV comment stream.” -”We especially want to be viewed by the Twitter community as the ideal Twitter integrated 2nd screen app ‘purpose-built’ for watching TV.”

40 maps that explain the world By Max Fisher By Max Fisher August 12, 2013 Maps can be a remarkably powerful tool for understanding the world and how it works, but they show only what you ask them to. So when we saw a post sweeping the Web titled "40 maps they didn't teach you in school," one of which happens to be a WorldViews original, I thought we might be able to contribute our own collection. Some of these are pretty nerdy, but I think they're no less fascinating and easily understandable. A majority are original to this blog, with others from a variety of sources. [Additional read: How Ukraine became Ukraine and 40 more maps that explain the world] Click to enlarge. How to Pass the Google Analytics IQ Test in Two Days: Zero to Hero I am going to tell you how to study for and pass the Google Analytics Individual Qualification (GAIQ) test in two days. But, why should you listen to me? I’m just a lowly intern, right? The GAIQ is a valuable certification that absolutely always results in multiple job offers, Oscar nominations, and your old boss begging to have you back. So, what will this post help you accomplish? Test Overview The GAIQ test is 90 minutes and 70 questions long, consisting of both multiple choice and True/False questions. Preparation First and foremost, go to Google Analytics IQ Lessons and watch all of the videos. You’re done watching the videos? Wake up! Ready to embarrass yourself further? Resources for the Test You are now as ready as you’ll ever be. First, download this cheat sheet from Matt Gratt’s blog. Taking the Test This is it, the moment you’ve been waiting for. Now, hit submit and wait a few seconds to see your score.