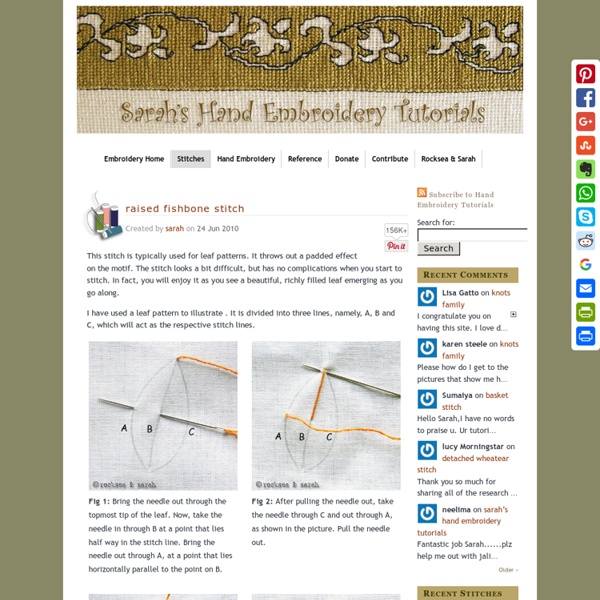 This stitch is typically used for leaf patterns. It throws out a padded effect on the motif. The stitch looks a bit difficult, but has no complications when you start to stitch. In fact, you will enjoy it as you see a beautiful, richly filled leaf emerging as you go along. I have used a leaf pattern to illustrate . It is divided into three lines, namely, A, B and C, which will act as the respective stitch lines. Tags: embroidery tutorial, filling stitch, hand embroidery tutorial, raised fishbone 37 Comments »

simple summer hammock When Grace was in town a few weeks ago, we did a little shopping at some of the new shops in my neighborhood. While browsing the jewelry at Marisa Haskell, we noticed these beautiful striped beach towels piled in the corner. They were a steal at just $30 each, and I wanted to buy out the whole stock, but instead I prudently picked up one and decided to make a simple summer hammock for the corner of our backyard. The bright stripes felt so summery, but I wanted to fancy it up a little bit, so I added natural leather straps, which will darken over time in the sun. You could customize this with a number of different fabrics and even size it up for family hammock time, and in the meantime I’m on the hunt for an online resource for those towels..I’ll update the post if I find anything!

Crochet a Gorgeous Mandala Floor Rug In this tutorial we’ll be making a beautiful crochet rug, made from T-shirt yarn. The pattern uses US terms and stitches include slip stitch (sl st); double crochet (dc); chain (ch); increase (inc) and a magic ring. T-shirt yarn (also called Zpagetti) in two colours that complement each other. You'll need about threes cones of yarn in total.A crochet hook in a size suitable for t-shirt yarn. TIPPED OUT - thebeautydepartment.com all photos: Kristin Ess + thebeautydepartment.com post designed by kristin ess Lots of emails this week asking for a tutorial on Lauren’s temporary bright colors. Here I’ve replicated the process for you in 7 steps on an extension.

Jersey Yarn Rug / Home Decor I was excited by the challenge to use nothing but a pair of my favorite orange handled scissors for this project. I knew immediately that I wanted to use them to cut lengths of t-shirt weight jersey knit to make my own balls of yarn as I have been wanting to start on a large scale crochet project for a while. Having been inspired by some lovely area rugs online and in stores, but knowing that purchasing enough yarn to complete such a project would be cost prohibitive, I decided to make my own! I bought several yards of jersey knit from the fabric store. Jersey knit can be bought at a very reasonable price if you shop around. I think the tan knit I bought was $3 a yard and the bright yellow was $2 a yard, making my project cost about $30 total.

How to Weave a Paper Ball Ornament When I was in Thailand, I would see the local people weave palm leaves into beautiful bowls, fans, balls and other amazing things. I asked my aunt if she knew how to make these things and she gave me a book that was all in Thai. I don't know how to read Thai, I can barely speak it. Make for Baby: 25 Free Dress Tutorials for Babies & Toddlers By Jaime Morrison Curtis | Nothing is sweeter than a little girl all dolled up in a homemade dress. Last week we shared a round up of how to make all your baby and nursery basics here: Make for Baby: 20 Easy Projects to Make Your Own Bedding, Gear, and Nursery Stuff. From the overwhelming response, we can see how much you enjoy making for your children.

Eisenstein's montage theory Montage--juxtaposing images by editing--is unique to film (and now video). During the 1920s, the pioneering Russian film directors and theorists Sergei Eisenstein and Dziga Vertov demonstrated the technical, aesthetic, and ideological potentials of montage. The 'new media' theorist Lev Manovich has pointed out how much these experiments of the 1920s underlie the aesthetics of contemporary video. Eisenstein believed that film montage could create ideas or have an impact beyond the individual images. Two or more images edited together create a "tertium quid" (third thing) that makes the whole greater than the sum of its individual parts.

Maillardville Manor: Cutlery Tray for Jewelry! I LOVE Jewelry, real jewelry, costume jewelry, all of it . . . almost as much as I love shoes! I have a small jewelry box for my "real" jewelry. As much as I'd love to fill a wall with gold and diamond jewelry, we can't afford that :( so as far as my real items go, I only own the classics. A small pair of diamond studs, a pair of peal earrings, a pearl necklace, a cocktail ring, a couple of white gold bands, and of coarse my wedding band and engagement ring!! But it wasn't my "good" jewelry I was having a hard time storing, it was my costume jewelry I couldn't make room for! There's nothing I love more than a great long necklace to complete a look but, what I had was a tangled mess of chains and beads.

Thinking Cap With Working Light My oldest son just started kindergarten and really loves it. Everyday he tells me that everything is so much fun but when I ask him what he actually did he says he can’t remember. At least I’m getting a positive reaction! Although he likes it he is still trying to figure the whole thing out – I think!

Movie Inspired Craft: Snail Shell Candles I love a good movie. Some movies have scenes so inspiring, tragic, or just so well-staged, that they are tattooed into my eyeballs forever after seeing them. The English Patient came out when I was in High School. I’ve seen it dozens of times since then, and one scene in particular has always haunted me. Making a picnic dress Several people have asked me how to make my Picnic Dress. It’s a bit too complicated for the step by step instruction on how to draft a pattern I gave for the draped t-shirt, but I hope this will be enough detail for anyone who is familiar with how dresses are made. You will need 4 yards of 45″ fabric and an 18″ zipper. These are the pieces of the pattern.