The Lady and The Reaper 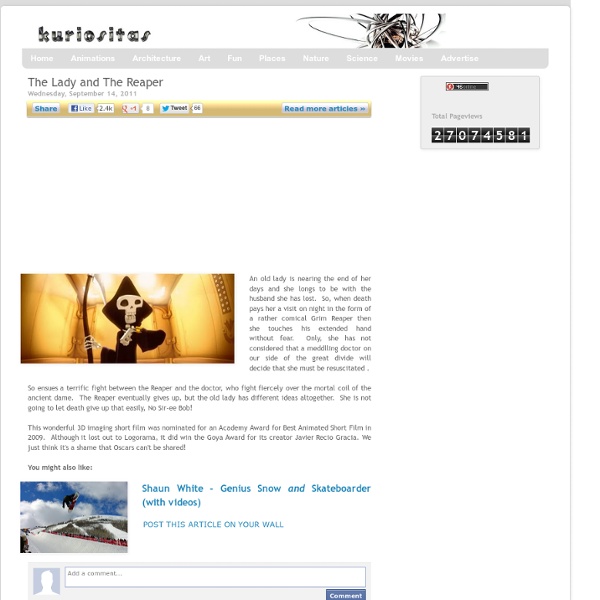 An old lady is nearing the end of her days and she longs to be with the husband she has lost. So, when death pays her a visit on night in the form of a rather comical Grim Reaper then she touches his extended hand without fear. Only, she has not considered that a meddlling doctor on our side of the great divide will decide that she must be resuscitated . So ensues a terrific fight between the Reaper and the doctor, who fight fiercely over the mortal coil of the ancient dame. The Reaper eventually gives up, but the old lady has different ideas altogether. She is not going to let death give up that easily, No Sir-ee Bob! This wonderful 3D imaging short film was nominated for an Academy Award for Best Animated Short Film in 2009.

5 Classic Cartoons They Don't Want You To See Who doesn't love cartoons? The Man, that's who. They insist on editing away those wonderful animated moments of horrifying violence, profanity and outright bigotry that cartoons from all eras like to slip in from time to time. 15 Amazing Animated Short films We all love short animated films, but creating short film is very hard task. Putting whole story in 5 to 10 minutes is not easy. Can you imagine? Few films produced after working hard more than 6 years! Here we collected 15 dazzling animated short films for your inspiration.

Beautiful Leaf Carving Art February 19th, 2011 Anila Arshad These amazing pictures show incredibly detailed portraits and pictures, all created out of single leaves. It takes an an incredibly complicated process of almost 60 steps to create the miniature masterpieces. Skilled artists spend up to a week working on the incredible creations, which can even be customized to show your own face. Star Wars Subway Car Produced by Charlie Todd and Matt Adams / music by Gustav Holst, arranged by Tyler Walker For our latest mission, we staged a reenactment of the first Princess Leia / Darth Vader scene from Star Wars on a New York City subway car. The white walls and sliding doors on the train reminded us of the rebel ship from the movie, and we thought it would be fun to see how people would react to a surprise appearance by the iconic characters. We spread out the actors along the train line, staging it so they would enter the right car at the right time. Enjoy the video first and then go behind-the-scenes with the photos and report below. Shot by: Matt Adams, Jason Eppink, Erik Martin Photography: Katie Sokoler (photo credit for all photos on this page.)

Chaîne de MontyPython Subscribe to the Official Monty Python Channel here - Here is the first of our series of exclusive clips of sketches from the last Monty Python Live (mostly) shows at London's O2 Arena, on 20 July 2014. Terry Gilliam, Terry Jones and Michael Palin, with Carol Cleveland, reprise their roles as Cardinal Fang, Cardinal Biggles and Cardinal Ximénez, in the classic sketch, The Spanish Inquisition. 10 Must-See Animated Short Films Movies and TV No matter how old you are, I’m sure you’d love good animations and cartoons. I still remember spending my whole afternoons watching Cartoon Network when I was still a kid. This Table Will Self-Destruct - Furniture & Decor Login | Cart (0) about CKIE | contact us returns | sell product PayPal Visa Mastercard Black Deck of Cards

Don't Panic! Samsung, Sybase Working To Make Enterprises Less Paranoid About Android Marvin Was Right: it's not paranoia for IT managers and CIOs to worry whether the smartphones and tablets in their enterprise pose massive security risks. Most do, especially ones running one of the recently-popular consumer-oriented platforms. I'm looking at you, Google. 22 Of The Best Short Animated Films You’ll watch in this article some of the best short animated movies that were created. Most of them were awarded or at least nominated for the Academy Awards. A lot of of these short animated films have a funny approach on the situations presented but you will also see some dramatic short videos. It will take you some to watch them all so I’m suggesting you to bookmark the article. I’ve watched all of these good animation movies and I was astonished by their authors’ creativity and exemplar execution. Logorama

Suzy's Artsy Craftsy Sitcom: Feature Friday- Faux Metal Wall Art Looking for the Faux Metal Wall Art? Since this project was originally published on The Sitcom in December 2010, it has been my most popular project by far. Who knew that a bunch of toilet paper tubes and an idea would become so big? Animated Short Films A film about design. If for one day you had the power to make your world work better, what would you change? makeshapechange.com