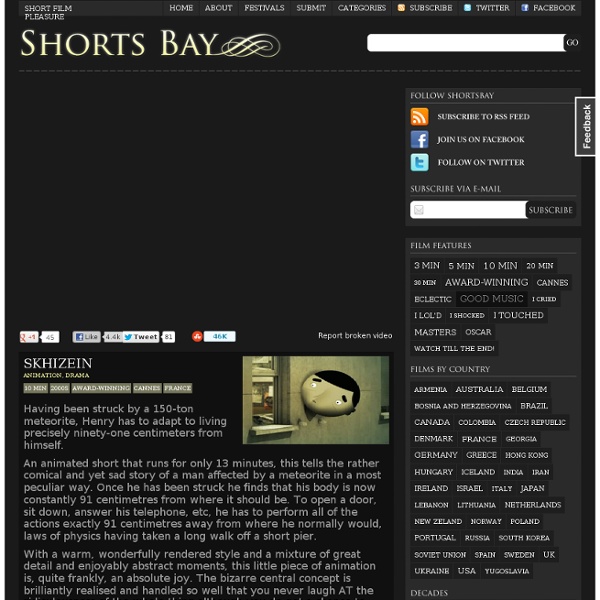 Having been struck by a 150-ton meteorite, Henry has to adapt to living precisely ninety-one centimeters from himself. An animated short that runs for only 13 minutes, this tells the rather comical and yet sad story of a man affected by a meteorite in a most peculiar way. Once he has been struck he finds that his body is now constantly 91 centimetres from where it should be. To open a door, sit down, answer his telephone, etc, he has to perform all of the actions exactly 91 centimetres away from where he normally would, laws of physics having taken a long walk off a short pier. With a warm, wonderfully rendered style and a mixture of great detail and enjoyably abstract moments, this little piece of animation is, quite frankly, an absolute joy. Writer-director-animator Jérémy Clapin is someone I hope continues to produce great work and go on to even bigger and better things. Won Kodak Short Film Award in Cannes Film Festival, 2008 Directed by Jérémy Clapin / France / 2008

Animated Short Movies » Life-Changing Arts Movie shorts, or short animations are a unique form of art, which can inspire and enlighten just like any other art form. Sometimes even more so. Here is a selection of inspiring, or for some reason animated short movies, here shown in their original full length. Thanks to all the visitors who have contributed with their detailed suggestions! That is why there are now two pages of great animated shorts! If you think there is a short animated movie that should be added, let us know which, and why. The below movies are not sorted in any particular order. French Toast Written and directed by Fabrice O. The Lady and the Reaper Written and directed by Javier Recio Gracia Get Out By Charlotte Boisson, Julien Fourvel, Pascal Han-Kwan, Tristan Reinarz and Fanny Roche Granny O'Grimm Directed by Nicky Phelan, produced by Brown Bag Films Oktapodi By Julien Bocabeille, Francois-Xavier Chanioux, Olivier Delabarre, Thierry Marchand, Quentin Marmier and Emud Mokhberi Big Buck Bunny Life Line Created by Tomek Ducki

15 Amazing Animated Short films - StumbleUpon We all love short animated films, but creating short film is very hard task. Putting whole story in 5 to 10 minutes is not easy. Can you imagine? I bet you will love these short animated movies, do let us know your favorite one, also feel free to share your favorite short film if it’s not present in the list. Granny O’Grimm’s Sleeping Beauty Oscar-nominated film of ‘Granny O’Grimm’, directed by Nicky Phelan, produced by Brown Bag Films, and written/voiced by Kathleen O’Rourke. Oktapodi (2007) In Oktapodi, these two cuties help each other escape the clutches of a tyrannical restaurant cook. This Side Up – A Short Animation by Liron Topaz A naive music-lover’s patience is tested on his quest to download music online, as his perspective on technology completely changes. Oxygen Oxygen tries to make friends on the playground. “Heavenly Appeals” a short film by David Lisbe After many millennia of being tortured in Hell, Raymond K. Marcelino and Bartolomeo: Bye Bye! Bunny Animation The Passenger Alma