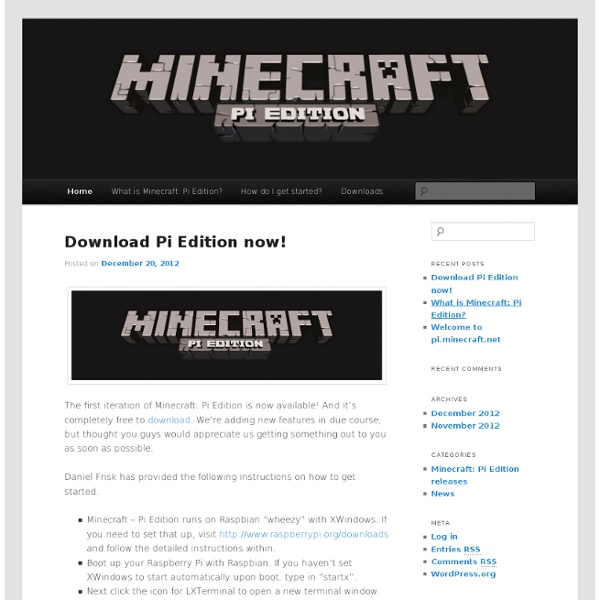 Pi-to-Go Aw, yes, the Raspberry Pi Computer, a credit card size mini PC that only cost $35. There are so many possibilities and uses for these small nano PCs. People have made them into PVRs (personal video recorders), retro gaming machines, weather stations, in-car PCs, jukeboxes, and so many more creative ideas. My mobile Raspberry Pi Computer is now complete and because this is an open source project I wanted to show you everything, including how to build one yourself. Just a quick blurb about myself. LCD Screen The LCD I used is from an after market backup camera system that can be installed in a car. Battery Pack First off, be very careful when messing with lithium-ion batteries. Charging the battery was easy, I just purchased an after market laptop battery charger. Internal Powered Hub One major problem with the Raspberry Pi is a lack of power. Extended Storage 64GB SSD, yes I did! Built-in WiFi & Bluetooth Operating System I'm using stock Raspbian Linux downloaded from raspberrypi.org.

MCPI Online RAPIRO on RPi Website A new Kickstarter was launched this morning: check out the video first, and then I’ll tell you about what we’ve seen first-hand of the project. We met Shota Ishiwatari at the three-day Raspberry Jam in Tokyo in May. He’s an established inventor of very, very cool stuff – you may have read about his Nekomimi cat ears, which were featured all over the internet when they came out last year. And here’s some British lady wearing a pair. Shota-san has real skill in getting that very special sort of Japanese cuteness (there’s even a word for it: かわいい, or kawaii) combined with tech. You’ll notice that the prototype we’re playing with here is not the same as the one in the Kickstarter video; after the event we got Shota-san sorted out with a camera board in time for the Kickstarter. And because the technology is Pi-based, Rapiro will, if it makes its Kickstarter goals, be much less expensive than currently available equivalents. The prototype we got to see worked perfectly.

Portable Pi Pibot FishPi Now that Raspberry Pi's are getting into the hands of folks around the world, we're starting to see all kinds of interesting projects. And in the case of Greg Holloway, his goal is a little more ambitious than most — to use a Raspberry Pi to create an autonomous vehicle that will cross the Atlantic Ocean. The aptly named FishPi project is currently in the proof of concept phase, but the final version will be powered by a 130 watt solar panel and includes features like a GPS, servo controller board for driving the rudder and motor, a compass, and a camera. The current test version is 20-inches long and features the Raspberry Pi itself housed in a plastic sandwich container. Thanks, Coolius!

Operating Systems The Raspberry Pi phenomenon appears to go from strength to strength; like a runaway train, it's ploughing ahead and forging itself a place in the record books. It's hardly surprising - the hardware alone is developed perfectly for the goals of the Raspberry Pi Foundation, the pricing is pitched perfectly, and having the unique versatility of Linux as the operating system seals the deal nicely. Most buyers, once they get their hands on their new RPi, make a move towards the official Raspberry Pi site and follow the getting started instructions therein; the end result is the user running Raspbian "Wheezy", the Foundation's recommended operating system, creating, learning and programming, and strapping the poor wee beast onto a weather balloon and sending it to the outer edge of the atmosphere. Raspberry Pi tutorial: how to do more What many RPi users don't realise, though, is that there's a wealth of other operating systems available for their beloved Pi. How we tested... Our selection

The Raspberry Pi The Making of Pi The idea behind a tiny and affordable computer for kids came in 2006, when Eben Upton, Rob Mullins, Jack Lang and Alan Mycroft, based at the University of Cambridge’s Computer Laboratory, became concerned about the year-on-year decline in the numbers and skills levels of the A Level students applying to read Computer Science. From a situation in the 1990s where most of the kids applying were coming to interview as experienced hobbyist programmers, the landscape in the 2000s was very different; a typical applicant might only have done a little web design. Something had changed the way kids were interacting with computers. There isn’t much any small group of people can do to address problems like an inadequate school curriculum or the end of a financial bubble. We don’t claim to have all the answers. Hall of Fame Raspberry Pi Foundation The Raspberry Pi Foundation is a registered educational charity (registration number 1129409) based in the UK. Foundation Trustees

RAPIRO Projects Despite its low cost, the Pi has everything a basic computer needs – processor, graphics and memory. And because it's also highly programmable, a huge online community has sprung up, customising their Pis and proudly documenting the results. Enthusiasts have harnessed the Pi to power voice-activated robots (the RaPiRo), play musical instruments (the BeetBox), get sozzled with Pi-controlled beer brewing (BrewPi) and even control high-altitude balloons, beaming photos back from near-space (Pi in the Sky). Of course it still is, essentially, a £32 credit-crunch PC and if you hook the Pi up to a keyboard and television you can just settle for surfing the web, playing games (there's enough horsepower to trump the PlayStation 2) and even watching films. And that's exactly what I tried for my first Raspberry Pi project: creating a low-cost media centre via the Wi-Fi-connected Pi. Unlike Sky TV, say, this credit card-sized board doesn't work straight out of the box. 1. Key Ingredients 2. 3. 4. 5.

Android Right, everything is built. But, since I'm not very good at this, it's not working (what a surprise). Getting the "not syncing - attempted to kill init" error. So far I've tried:Creating partitions with the debian partition, deleting all the debian and firmware files then replacing them with the latest firmware, the kernel I built and the android files. All of these had the same result, the same kernel panic, so it seems that the problem lies in the init file, as the panic suggests.Init.rc is as follows: on early-init start ueventd on init sysclktz 0 loglevel 3 # Backward compatibility symlink /system/etc /etc symlink /sys/kernel/debug /d # Right now vendor lives on the same filesystem as system,# but someday that may change. symlink /system/vendor /vendor # create mountpoints mkdir /mnt 0775 root system mkdir /mnt/sdcard 0000 system system # Create cgroup mount point for cpu accounting mkdir /acct mount cgroup none /acct cpuacct mkdir /acct/uid write /proc/apanic_console 1 class_start default

Picade UPDATE: We're now making the Picade work with other systems (esp. Mini-ITX) and turning the controls into a USB HID device. UPDATE #2: We're bundling games with the Picade starting with retro classic from Sheffield's Gremlin Graphics. Thanks to games industry legend Ian Stewart for this. Don't know what to do with your Raspberry Pi®? The Picade and Picade Mini are high-quality desk top arcade cabinets for your Raspberry Pi®, Mini-ITX, Pandaboard, or other mini PC. The Picade and Picade Mini come in kit form for you to build at home. The only tools you'll need are a screwdriver and a pair of pliers. You then load up your mini computer with whatever games or emulators you want to play, hook it up to the Picade and have a blast! What you'll receive in the Picade kit: Right now we're at the prototype stage. Currently the cabinet panels are laser cut (what else would you expect from the Pibow guys?!) If we make our target and go beyond we have some ideas we'd like to integrate into Picade.