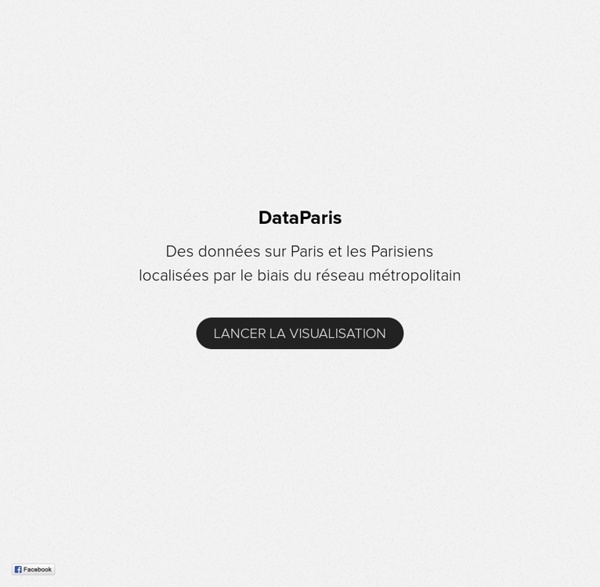 Graphic: As Ebola's Death Toll Rises, Remembering History's Worst Epidemics Ebola is the latest in a long list of infectious disease outbreaks that have plagued humankind. The worst become pandemics, sweeping across continents and killing as many as tens of millions of people. Today, nations are struggling to get Ebola under control. This week saw New York City's first case, while the World Health Organization declared Nigeria and Senegal free of Ebola. (See "From Senegal and Nigeria, 4 Lessons on How to Stop Ebola.")

Global Migration Patterns: the Flows of People to and from Countries Global Migration Patterns [mpg.de] by the German Max Planck Institute for the Study of Religious and Ethnic Diversity contains a set of interactive instruments that visualize the latest global migration data. The "International Migration Flows shows the different flows to - and from - selected OECD-countries between the years 1970-2007. It illustrates the concept of "Superdiversity", or how during the last 2 decades more people than ever have moved between different locations worldwide. The outer circle shows the number of emigrants, with each bar represents a country of origin and each color conveying a unique continent.

The French elite: where it went wrong ©Luis Grañena The French Stalinist Maurice Thorez spent the second world war in Moscow, where he called himself “Ivanov”. When France was liberated, he came home and entered government. After Charles de Gaulle stepped down as French leader in 1946, Thorez picked up one of the general’s pet projects: the creation of a school, the Ecole Nationale d’Administration, to train the new republic’s top bureaucrats. This caste, Thorez must have thought, was the “vanguard of the proletariat” that Lenin had always talked about. Treehugger Treehugger Concepts “Treehugger” is a pavilion that is currently exhibited at the National Garden Show (BuGA) 2011 in Koblenz, Germany. It results from a research-project that was initiated by Dipl.-Des.

40 Useful and Creative Infographics Six Revisions Menu Main Categories CSS HTML JavaScript Web Design WordPress Web Development Google RO.ME › North Kingdom In the simplest of terms explaining it – “3 Dreams of Black” is an interactive music video developed in WebGL and optimized for Chrome to showcase its possibilities; written and directed by Chris Milk; based on the song “Black” from Danger Mouse and Daniele Luppi’s ROME album; an album that somewhat is a soundtrack to a movie that doesn’t exist. The music serves to express a story that takes place in a post-apocalyptic landscape where the main characters are played through the voices of Norah Jones and Jack White. More specifically, “3 Dreams of Black” is Norah’s lucid dream where users can partake and gain control of her characters experience. Together with Chris Milk and Google Creative Lab we took on the role to lead the development across disciplines and serve as one unifying hub to tell the story of ”3 Dreams of Black”.

Bio.Diaspora: Visualising interactions between populations and travel I want to share some impressive work I’ve recently come across from a Toronto-based project/group called Bio.Diaspora. Last week the team was featured in the Lancet Infectious Disease Journal as part of a special report on Mass Gatherings and Health. The report focused specifically on the potential health risks posed by the mass gathering and transit of people attending events like the Olympic Games. You can find out more information about this story on the BBC and CBC, as well as through watching the animated visualisation below. Lunch with the FT: Xavier Niel The telecoms billionaire is called France’s Steve Jobs by some and a ‘peep-show man’ by others. In Paris, he talks to Simon Kuper about blocking Google’s ads and battling Sarkozy ©James Ferguson

Flying Houses by Laurent Chéhère The residential buildings of Paris appear to be sailing through the sky like kites in these dream-like images created by French photographer Laurent Chéhère (+ slideshow). "All these flying houses are the fruits of my travels in the popular districts of Paris; Ménilmontant and Belleville," Laurent Chéhère told Dezeen, explaining how he manipulated photographs of real buildings to create impossible images inspired by "the poetic vision of the old Paris." Some of the buildings pictured look just like typical houses, while others boast unusual features like a giant window or wonky walls.

online paint program Flame Painter is a unique paint program, it belongs to my 'I am an Artist' experimental project. I think with tools which inspires you, everyone can be an artist. You can try it here, change different brush settings and paint your own flame paintings. When you change the background from black to white, the palette changes from additive to subtractive and the feeling of the painting is very different. It's not easy to explain all brush parameters, so I leave this for your experimentation. Check out new Rebelle - the real watercolor and acrylic paint program, Amberlight - abstract art tool based on particles, or Fluidance motion effect program.

American migration map Overhauling his migration map from last year, Jon Bruner uses five year's worth of IRS data to map county migration in America: Each move had its own motivations, but in aggregate they ­reflect the geographical marketplace during the boom and bust of the last decade: Migrants flock to Las Vegas in 2005 in search of cheap, luxurious housing, then flee in 2009 as the city’s economy collapses; Miami beckons retirees from the North but offers little to its working-age residents, who leave for the West. Even fast-growing boomtowns like Charlotte, N.C., lose residents to their outlying counties as the demand for exurban tract-housing pushes workers ever outward. Compared to last year's map, this one is much improved. The colors are more subtle and more meaningful, and you can turn off the lines so that it's easier to see highlighted counties when the selected county had a lot of traffic during a selected year. Update: Jon also explains how he built this map sans-Flash on his own blog.